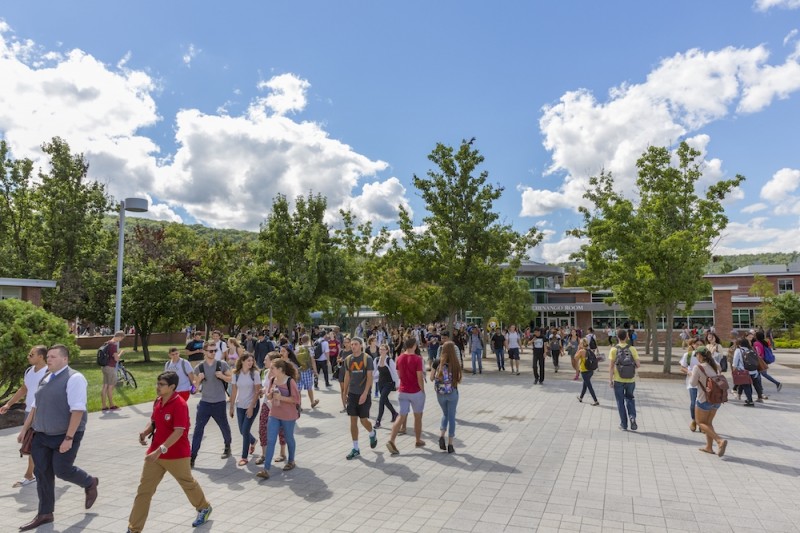 BINGHAMTON, NY – Binghamton University welcomes new and returning students and their families on Aug. 20 and 21, respectively, with move-in days signifying the beginning of the fall semester and a new academic year.

“Another academic year brings another outstanding class to Binghamton,” said President Harvey Stenger. “The Class of 2021 represents some of the most academically gifted students we have ever seen, and they will surely have a great impact on not only the campus, but also the surrounding community.”

For the third consecutive year, Binghamton received a record number of applications; this year 33,406 freshman applied for fall 2017 admission, surpassing the previous record of 32,106 set in 2016. The admitted class has an average high school GPA of 95 and SAT scores at about 1,360 for evidence-based reading and writing and mathematics. The SAT score is based on the new SAT scale, which was launched in March 2016.

“Binghamton has built a strong academic reputation, not just around the country, but around the globe,” said Provost Donald Nieman. “The caliber of this incoming class is a testament to the University’s distinction as a top-tier institution, and we are honored to welcome such an impressive crop of students.”

This semester also marks the arrival of approximately 90 students enrolled in Binghamton’s new School of Pharmacy and Pharmaceutical Sciences (SOPPS). The school will hold its inaugural White Coat ceremony on Sept. 9, marking students’ transition from pre-clinical into clinical studies.

“We’re all looking forward to welcoming our inaugural class,” said SOPPS Founding Dean Gloria Meredith. “Our students will learn from an innovative curriculum that includes a broad range of opportunities in different practice settings and thorough research. I’m confident that this school will be a great asset for our community and will help address gaps in the health-related workforce in our region.”

The SOPPS will enroll approximately 350 students when fully enrolled after four years – 320 in the PharmD program and an additional 30 PhD students.

Binghamton also anticipates a large number of international students to join the campus community this fall. The 600-plus new international student population consists of approximately 220 undergraduate and 400 graduate students from over 45 countries, with the greatest numbers coming from China, India, Turkey and South Korea.