Leadership in the Army

What kind of leaders does the military need? 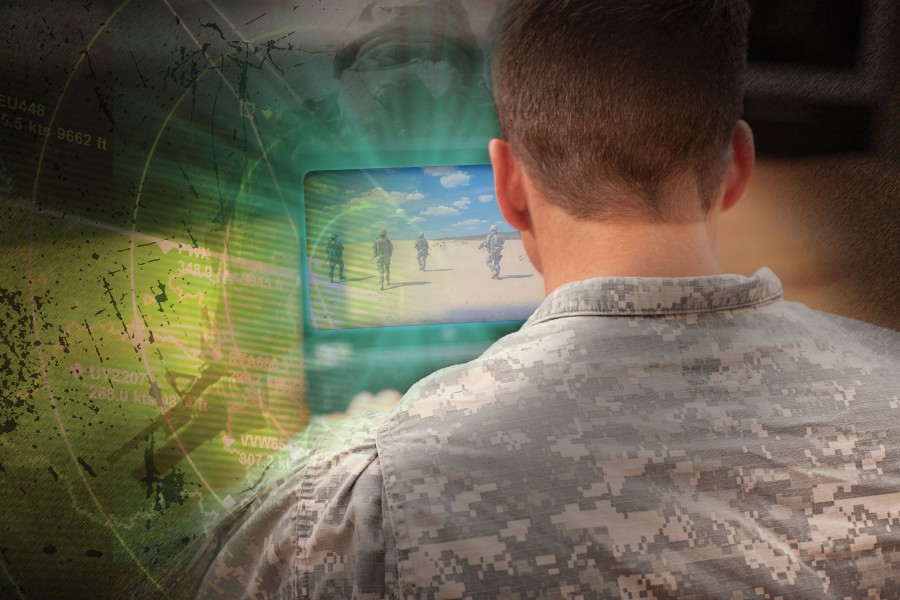 High-speed communications and the ever-present threat of terrorist attacks have changed the way we fight wars. Mostly gone are the large-scale invasions; U.S. armed forces are as likely to skirmish with a handful of insurgents as they are to come to the aid of people in harm’s way. Decisions must be made faster than ever by soldiers who can assess and then act on a situation in real time.

So what kind of leaders does the military need?

The Center for Leadership Studies (CLS) at Binghamton University is working with the Center for Applied Social Research at the University of Oklahoma on a project to build and validate planning and leadership models for the U.S. Army. A two-year, $640,000 grant from the Army Research Institute will help the researchers determine how the military can and should adapt to changing circumstances.

School of Management Distinguished Professor Francis Yammarino is director of the CLS and principal investigator on the grant. Professors Shelley Dionne of the School of Management and Hiroki Sayama of systems science and industrial engineering are co-PIs, along with University of Oklahoma psychology professors Michael Mumford and Shane Connelly. The CLS expertise in multilevel and collective leadership approaches is a key part of the research and application to improve Army operations.

The grant will support the lab-based research component of the study.

“The Army realized a long time ago that its top-down structure of leadership just doesn’t work, because when they’re in the field and things are rapidly changing, the commanders on the ground need the ability to move quickly and push ahead,” says Yammarino, who has experience constructing and measuring collective leadership/shared responsibility models.

“This project builds from that and takes it to the next step,” he says.

A good leader needs to be a good planner.

“In the past, planning was built from the top down at the Pentagon, with a little more detail added at each level. The problem becomes the differing perspectives between the Pentagon and teams on the ground — coupled with all the changes in the world. They have to build in more leaders and shared responsibility,” Yammarino says.

Dionne agrees, noting that warfare is different now than in the past. “It’s no longer fought from the edge of a ship. We have to send the Army into neighborhoods where things are happening on the ground and changing rapidly,” she says. “There’s no time to have things go back up the chain in such an ambiguous environment.”

Using video game simulations, the researchers will study how people can plan as a collective to react to changing environments, Yammarino says. They’ll use two types of simulations, one based on military scenarios and another on business strategies. “The reason for both military and business experiments is that we want to tease out commonalities as well as differences. In some, certain factors might be weighted differently.”

In a lab at the University of Oklahoma, a collective of eight to 10 players will have to plan a military objective and then play the video game to see what they accomplish. At Binghamton, the simulations will focus on green companies and the ability to make decisions related to environmental sustainability.

We hope to determine what matters in the collective process and develop training they can build and use.

“These students will have different levels and types of expertise, and will play different roles,” Yammarino says. “With no top-down leadership, they’ll have to generate their own ideas and work out the planning of the group. Drawing on different networks, the players will learn, plan and execute to try to win the game. We hope to determine what matters in the collective process and develop training they can build and use.”

Winning isn’t easy, given that the researchers manipulate the game, introducing unexpected factors to intentionally “screw things up,” Yammarino says. “For example, for the military simulations, we’ll change some control conditions, have them run out of a resource or introduce terrorists or a nuclear device. It’s an interesting game, like ‘Battle Commanders.’”

In terms of the military outcomes, Dionne says, collectives on the ground have to be led; they have to make important decisions in difficult and shifting environments. “If we don’t provide this training, we’re missing an opportunity to give the best decision-making and problem-solving skills to the people who need them on the ground. They can’t guess. There can be no mistakes. This type of leadership has to work,” she says.

If we don’t provide this training, we’re missing an opportunity to give the best decision-making and problem-solving skills to the people who need them on the ground.

Every session is taped, and the video and audio are coded based on the decisions the gamers make. The coding is labor-intensive, Yammarino says, with three students reviewing each tape four times. “All that data goes into our first look before we refine it and go to computational modeling and agent-based models.”

That’s where Sayama’s expertise comes in.

“I’ll be building computer-simulation models of how teams and organizations behave,” Sayama says. “This grant is about the teams in Army settings, so we’ll build computer-simulation models where each individual team member is represented explicitly with personal knowledge, experience, roles, attributes. Anything you want to include. We’ll predict, for example, what is going to happen under certain conditions. We’ll run a lot of simulation experiments to create hypotheses that we can test.”

Sayama will also analyze the data that comes from the real-world experiments. “They’re doing the military experiments at Oklahoma and extracting a lot of variables that come out of the games; I’ll crunch those numbers. We’re also interested in how different outcome variables interact with each other. That’s where our analytical expertise can play a role,” he says.

The trio of Hiroki Sayama, Francis Yammarino and Shelley Dionne, with Sayama as principal investigator, has also garnered a grant from the National Science Foundation related to the Army Research Institute grant, but with a different context and deliverables.

The NSF grant —$441,000 over three years— will focus on the general collective design process, not necessarily in a military setting, but for general engineering or collaborative design, Sayama says.

“The missing piece is what role social networks play in the creative process,” he says. “In our research, we can change the pattern of connectivity, so we have the opportunity of manipulation; who is talking to whom?

“We can navigate the idea-sharing process, and that’s the main research objective,” he adds.

Dionne, responsible for running the experiments, will also provide background for Sayama’s modeling, looking at the relationships among the many variables that will be measured from the video game simulations. “We’ll be looking at how the variables work together,” she says. “These collectives are trying to develop relationships — with children in the neighborhoods they enter and with police forces they’re trying to teach. We’re asking them to be warriors and also to be leaders, almost each and every one of them. When have they ever walked into neighborhoods that were filled with insurgents and found people hiding in homes? We’re asking a lot of these collectives. These are our leaders, and they’re only 19- and 20-year-olds. They need a shared model.”

The world has changed, Dionne says, requiring leaders to work simultaneously on very different tasks, but with very diverse levels of experience. “We’re seeing a level of complexity we haven’t seen before, and these soldiers are expected to be perfect under pressure. If we develop a leadership model that helps this collective plan and make decisions better, it touches formal and informal levels,” she says, adding that public opinion and media play a major role today. “In World War II, there could be private moments. Now, everything is immediately on the world stage.”

At the end of the basic research, Yammarino says, the trio wants to know if the collective process actually works and if it achieves the desired outcomes more effectively than the traditional top-down leadership model. “We also want to know what are the actual variable constructs involved in this. What are the critical factors that make or break these things? If we get these answers, it sets us up really well for the applied phase of this research.”

If the grant is extended, the collective planning and leadership model could be tested at Ft. Hood in Texas.