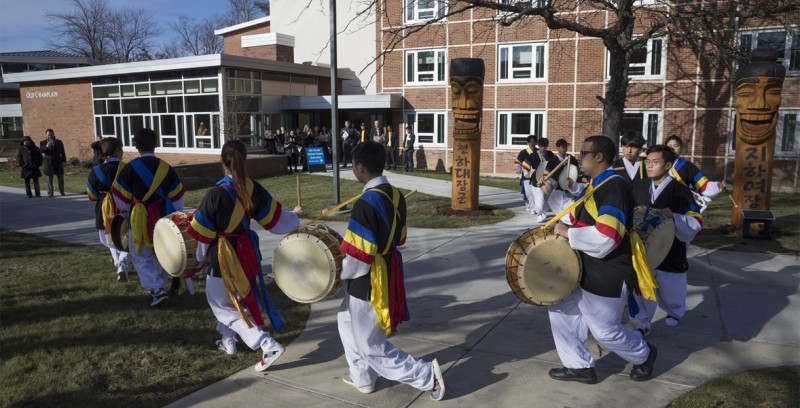 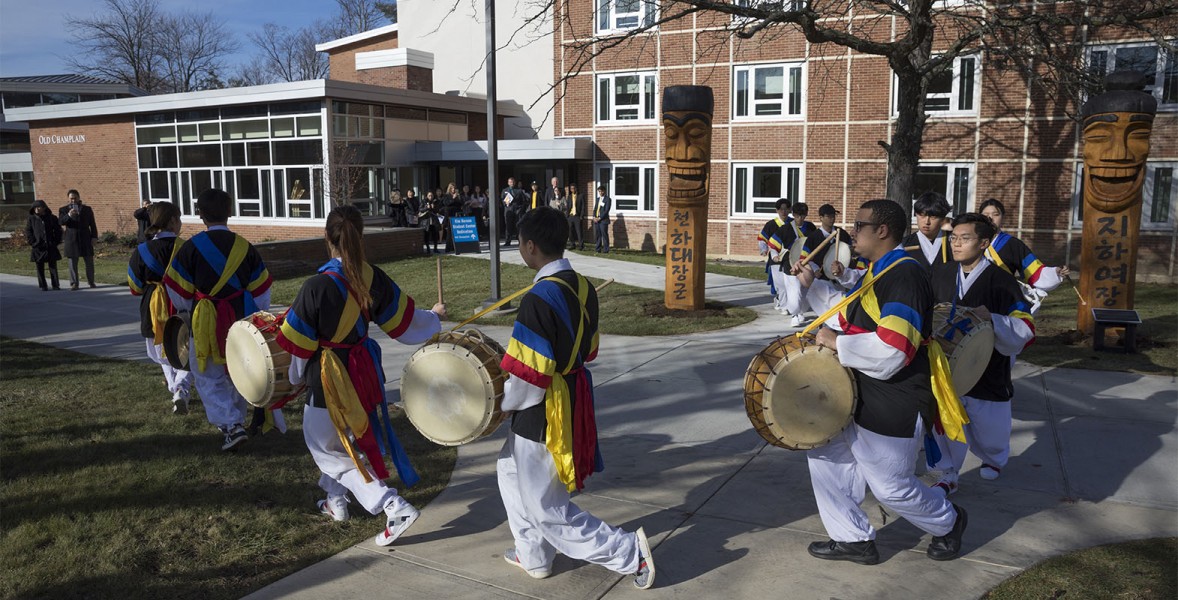 “That percussion instrumental dance was outstanding and I’m amazed that our students have that kind of talent,” said Binghamton University President Harvey Stenger, thanking Charles Kim ’98; his wife, Jean Su Maeng-Kim; and his brother, James W. Kim ’99 for their donations that made the center possible.

“I’ve been talking about Binghamton University’s mission to transform lives for our students and this will be a transformation to celebrate their (the Kims’) history and culture in this space,” Stenger said. “It’s a legacy they have handed down, starting with their scholarship recipients from Korea and St. Thomas – more than a dozen students have been fully funded.”

Stenger recalled one of the first times he met Charles Kim, at a scholarship luncheon where donors meet their scholarship recipients. “Charles said to me, ‘Harvey, do you have any envelopes?’ and I ran down the hall and brought several back,” Stenger said. “He told me he needed eight, and then proceeded to take out his wallet and start stuffing cash into them to hand to the students, saying, ‘I didn’t think they were getting enough this year.’”

Stenger praised Charles Kim for what he is doing to help restore destruction in St. Thomas now, and how he has helped the School of Management by funding finance curriculum initiatives and the Bloomberg terminal. “When you talk to Charles, he exudes love for Binghamton University, and at his relatively young age, is able to give back.

“Our students work tremendously hard but they also need time to connect and relax with friends and that’s what this center will do,” Stenger said. “This space will be available to students of Korean descent and others as well, and provide a place where students will burn a lot of energy.”

Charles Kim thanked everyone for joining him in celebrating the new center. “We’re here today because of the prominent role Binghamton has played in my life and those of other Korean American students,” he said, as he explained why he believes in giving back and why he supported the center named after his late father.

Kim’s father fought in the Korean War before he and his wife immigrated to the United States. His father then became a Marine and fought in the Vietnam War. “He followed his ambition with $175 in his pocket when he came to the U.S. to study, and was one of the first Korean Americans to earn a broker’s license and start his own firm. I admired his ability to endure and excel under these circumstances.

“He used to say that success goes not to the lucky, but to the determined,” Kim added. “He taught me the importance of developing meaningful relationships and it’s a combination of the two that brings us here. I hope this center will foster relationships while enriching the student experience so students can create new friendships and tighten ones they already have. As students struggle through their studies, they should keep in mind these will be some of the purest and longest-enduring of friendships they will ever have.”

Kim’s vision for the center is that students will bounce ideas off of each other and learn that even failures are opportunities for learning and growing. “Utilize this center as an intellectual and creative garden,” he said. “Like a garden, you are all seeds and won’t grow by yourselves. It’s an honor for me to open this garden today.”

Steven Bloom, president of the Binghamton University Foundation Board, also spoke of Charles Kim’s contributions. Noting that he is brilliant and hard-working, Bloom said that one of Charles’ characteristics as a trader is the ability “to make a smart, bold bet.”

“When you look at this center and see the vision and initiative it takes to create something like this, it reflects your trading style,” Bloom said. “You see something, make a big bet and make it happen. It’s wonderful to do this for yourself and to honor your father and family.”

“What we have here is a real moment together in this shared space,” said April Thompson, associate vice president and dean of students. “I see the gift of inspiration where our students can learn what is possible for them now and in the future. Our hope is that students will engage here; come together; communicate; work; play; meet faculty, students and staff; and become the future leaders of Binghamton University and of our planet.

“Take notice of the carefully thought-out and planned details,” Thompson added. “And take the time to enjoy it. We hope students will make connections here while we show a prominent, clear symbol of belonging and place for our Korean American students here at Binghamton University. The gift you have shared with us will impact generations of students to come.”

James Kim provided a context for the colorful artwork in the center, and what it symbolizes. “It took a small team to get creative and make it aesthetically profound and impactful,” he said. “The whole room is themed on the concept of a traditional Korean home.”

Such homes bring the natural world inside, so James Kim explained that the table symbolizes a river and the partition represents the mountains. “The mural was done by a Korean-born artist and is unique because it uses the traditional Korean color palette and is rife with the meaning and patterns of mountains, rivers and the Korean skyline,” he said. “The totem poles outside were not only placed to help us learn and create, but also for us to discover something about our heritage.”

The dedication concluded with another performance by Sul Poong.