Biomedical engineering student Rebecca Mancusi was one of six students to win out of more than 200 poster presentations for her work with a rare immune disorder.

Mancusi with her award from the ABRCMS for her immunology poster. 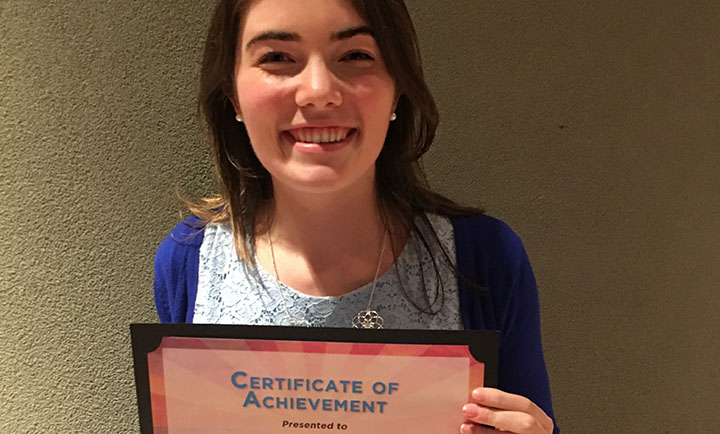 Mancusi with her award from the ABRCMS for her immunology poster.
By Rachael Flores

While some students spend the summer tanning on a beach or catching up on sleep, junior biomedical engineering student Rebecca Mancusi spent her summer working long hours on immunology research at Mount Sinai.

All that hard work paid off, too. Mancusi’s poster presentation of her work at Mount Sinai’s Icahn School of Medicine won top marks at the Annual Biomedical Research Conference for Minority Students (ABRCMS) in Phoenix. Her project titled “Characterizing Hematopoietic Precursors of Langerhans Cell Histiocytosis (LCH) Using a Humanized Mouse Model” was one of only six immunology posters to be honored out of over 200 other immunology posters.

So, what brought Mancusi to Mount Sinai this past summer? She participated in a competitive 10-week Summer Undergraduate Research Program (SURP). The application’s requirements are similar to the typical graduate school application and Mancusi’s three years of previous research experience helped her stand out.

“I knew exactly which lab I wanted to work in,” explained Mancusi. “I wanted to work with Dr. Miriam Merad. Not only is she an inspiration to women in the field but she is also working in an area of science that I find fascinating.”

Merad’s novel research aims to harness a patient’s own immune system to fight against cancer and inflammatory diseases. She wants to create an alternative to traditional cancer treatments that can be very trying on patients, especially children.

The study Mancusi participated in was focused on a disorder called Langerhans Cell Histiocytosis (LCH). It’s a rare type of inflammatory disorder that predominately affects children and can currently only be treated with chemotherapy.

Mancusi’s summer research involved developing a humanized mouse model of LCH. After processing human samples, Mancusi worked to engineer a specific population of immune cells to express a mutation characteristic of LCH. As she puts it, “Once transplanting these pathogenic cells into the mice, we wait to observe any symptoms of LCH.” This model ultimately provides the platform necessary to explore new treatment options for LCH.

“We were one of the first to ever be able to create this model! It was definitely a challenging process though,” Mancusi said. “From the time we received the human samples to the time we performed transplantations, it would take more than two weeks for us to have our first results. The procedures were done in a staggered manner to accommodate this time-intensive process.”

Mancusi was mentored by post-doctoral fellow Camille Bigenwald. “She really helped make things fun. We keep in touch now and she updates me on where the study is at,” Mancusi said.

“I worked in the lab for 10 weeks and sometimes I would be working for 50 or 60 hours each week,” said Mancusi. “But I loved it! I was okay with the long hours because it was a topic I was extremely passionate about.”

ABRCMS was Mancusi’s first conference and she was not expecting to win.

“It was such an amazing experience. I was able to share this research that I’m excited about with professors, deans, other students and researchers from all over the world,” she said.

While the research regarding LCH is still in progress at Mount Sinai, Mancusi was happy to be a part of this step in the process.

During the academic year, Mancusi works as an undergraduate research assistant in assistant professor Brian Callahan’s biochemistry lab, where she has been conducting research on the Hedgehog Signaling Pathway since freshman year. “Dr. Callahan has been a source of motivation and encouragement for me since day one. The research experiences I have gained in his lab have undoubtedly moved me forward in my career.”

She is planning to continue this type of work and has her eyes set on pursuing a PhD.