“Hybrid” scheduling may hold the answer 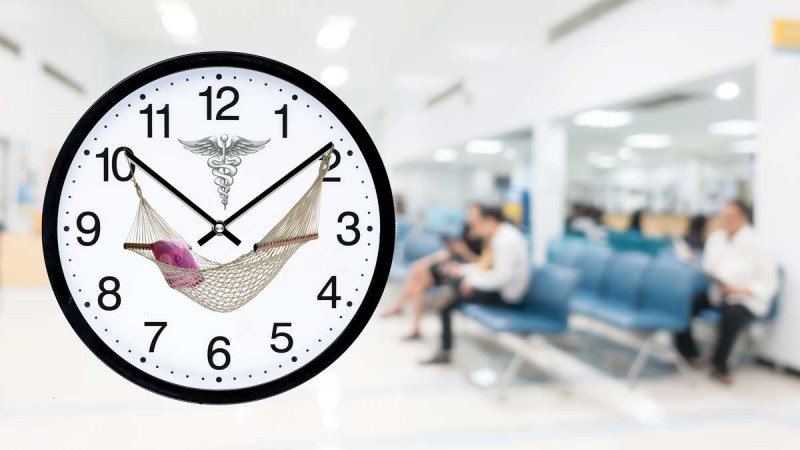 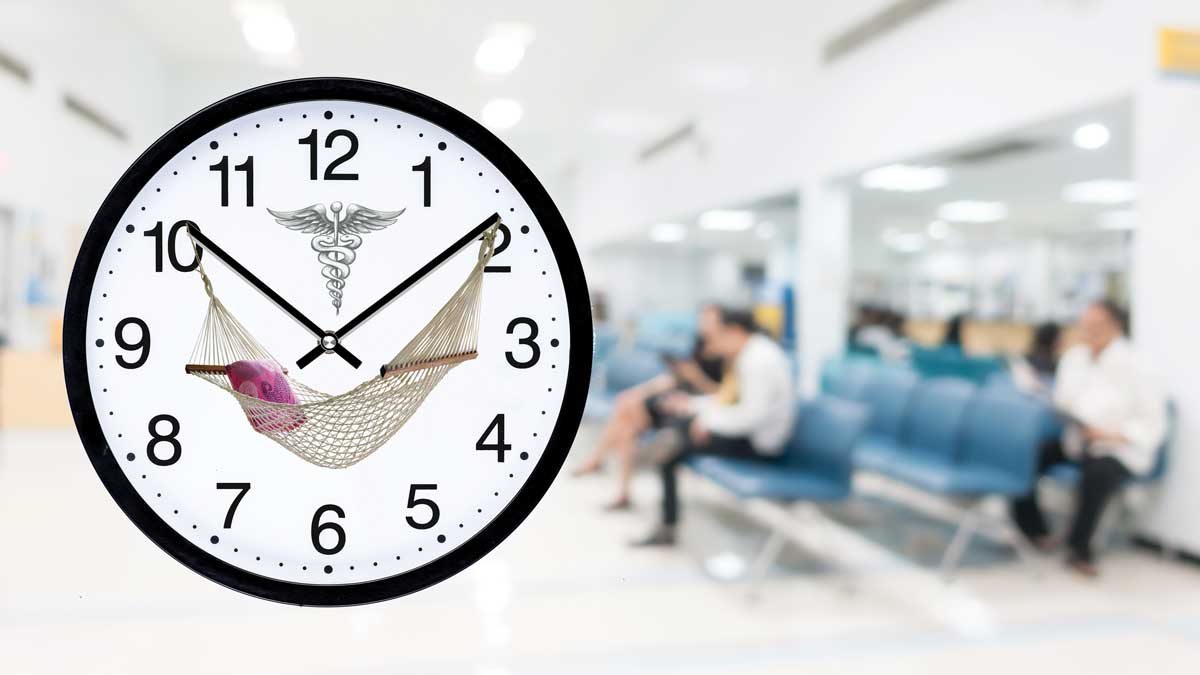 You wake up with a pounding headache and know that you should see a doctor. And then the wait begins. The next appointment is weeks away, and if you go to the walk-in clinic or emergency room, you’ll kill most of your time sitting in the waiting room swapping stories (and germs) with other patients before getting in to see the physician. It’s enough to make you sick.

Scheduling is one of the most important, though often overlooked, elements of the healthcare process. Getting in to see a doctor when you are ill is critical, but wait times are getting longer, patients are missing more appointments, and doctors’ offices are becoming more crowded.

The average time to get an appointment (called lead-time) is now more than two weeks, and for some specialties it can take months. In fact, lead-times have increased 30 percent, to 24.1 days, since 2014, according to a recent study by the national physician search firm Merritt Hawkins. And once you are in the doctor’s office, be prepared to wait longer as well. Waiting room times now range from under 15 minutes to nearly three-quarters of an hour.

Patients are impatient, health clinics are losing money, and patient outcomes can suffer.

That’s why Mohammad Khasawneh, professor of systems science and industrial engineering and associate director of the Watson Institute for Systems Engineering (WISE), and graduate student Sharan Srinivas worked together to develop a new “hybrid” scheduling system that offers the reliability of scheduled appointments and the immediacy of walk-in visits. A paper they wrote for the International Journal of Operational Research outlines a scheduling system that effectively balances the need for immediate care with the need for clinics to have a consistent flow of patients.

Khasawneh and his colleagues in WISE work with hospitals and other healthcare providers to make healthcare more efficient and effective. Their goals are to lower costs and improve the quality of care. Khasawneh also works with clinics and hospitals to improve workflow and even helps them implement ergonomic designs. He’s worked with providers across the nation, including United Health Services in Binghamton; Montefiore Medical Center in Yonkers, N.Y.; and Mount Sinai Health System and Memorial Sloan Kettering Cancer Center in Manhattan.

Healthcare scheduling is a hidden crisis, occasionally brought into the open by scandals like the one in 2014 that roiled the Veterans Health Administration (VHA). There, staff members falsified records to cover up the fact that the VHA clinics were missing their 14-day appointment targets. The scheduling failures are implicated in the deaths of more than a dozen patients. Public outrage led to the resignation of several VHA administrators and prompted investigations.

When a patient doesn’t show up, you end up leaving very expensive resources idle ... We waste these peoples’ time and it’s a problem.

“No-show rates among patients in family residency practices can be as high as 42 percent,” Khasawneh says, and this has a ripple effect on the healthcare system. “When a patient doesn’t show up, you end up leaving very expensive resources idle — physicians, nurses, hospital rooms, clinic rooms, medical technology. We waste these peoples’ time and it’s a problem.”

Patients are a problem

Healthcare providers have spent years trying to figure out ways to ensure that patients are in the office at the appointed time. They’ve used reminder letters, emails, texts and phone calls — some have even resorted to providing transportation to certain patients, which Khasawneh says can be successful in some locations.

“We’ve worked hard to reduce the no-show rate,” he says, “but the impact will eventually reach a limit. We still have a high rate. This is outside our control because it relies on the patient.”

Instead, systems engineering accepts patient no-shows as a given and uses tools like overbooking to shorten times to appointments.

Khasawneh says that healthcare providers have borrowed the idea from the airline industry and have begun to double-book scheduling slots in anticipation of no-shows. “If you ask me if the airlines implement this intelligently,” he says, chuckling, “I would say, ‘I’m not so sure.’ The goal of an effective scheduling system is to double-book in a way that is intelligent.” That means keeping physicians and staff occupied throughout the day and keeping patients satisfied with reasonable wait times.

... the longer a patient waits for an appointment ... the more likely it is for the patient not to show up.

However, just as when two travelers hold the same seat, trouble arises when two patients arrive for the same appointment slot. Waiting rooms can become more crowded. Patients become irritable with longer waits, and their overall satisfaction with their doctor declines, which can lead to even more no-shows in the future. With too many patients in the clinic, staff may need to work overtime to provide care, costing the clinic money. Patients who can’t get in to see their doctor may turn to the emergency room, leading to overcrowding and longer wait times at the hospital. Meanwhile, patients who will miss their appointments remain on the schedule, pushing appointment times farther into the future, which only makes the no-show problem worse.

Khasawneh provides an example from his own life. “I just called my dentist the other day to get an appointment for my kids, and they told me the first available appointment is after Jan. 1. It’s August, so when someone tells me that their first appointment is in January, the likelihood of me not showing up for the appointment is very high — but I might take it as a backup. But the literature tells us that the longer a patient waits for an appointment, especially if it is more than three months out, the more likely it is for the patient not to show up.”

How to balance workload

Srinivas, now an assistant professor with joint appointments in the College of Engineering and Trulaske College of Business at the University of Missouri, says many healthcare providers have tried to implement schedules that allow for same-day appointments and/or walk-in patients, but have had problems finding the proper mix. Too many walk-in appointments, and staff may be overwhelmed; too few, and physicians sit idle.

How Long is the Wait?

Instead of waiting for a doctor’s appointment, patients may turn to walk-in clinics or emergency rooms for immediate care, thus increasing the demand on those facilities. Average lead times for a doctor’s visit are:

When using an emergency room, expect an average wait of:

Scheduled appointments have their own challenges. Patients want to see their own physician. Are they willing to postpone a visit to meet with a specific doctor, or will they forgo the personal touch so they can be treated immediately?

All of these variables make it difficult to create a system that can be used universally. Instead, Srinivas says, a scheduling system needs to be tailored to the individual hospital or clinic. Doing this requires historical data about the patient base, as well as environmental information about the clinic, such as how patient no-shows increase at different times of the year. In the end, Srinivas settled on 15 variables, ranging from the number of doctors to the length of the appointment, and developed a mathematical model that weighed and tested all these variables.

“Healthcare managers will find this interesting,” Khasawneh says, “because it gives them a data-driven model rather than relying on intuition and experience. You know how your clinic has performed in the past, and you can use that data to tell you how to plan your scheduling.” Traditionally, clinic managers would estimate the number of scheduling slots to leave open for walk-ins. “Now,” Khasawneh says, “if you can provide us with the data, we can run the analytics and tell you what will work best for you.”

What works best for clinics is saving money. Khasawneh says that WISE has had great success in helping clinics reduce costs by improving scheduling, and Srinivas’ algorithms will only enhance their ability to trim costs. “We’ve had several hospitals that have implemented the results of this model,” Khasawneh says, and they’ve achieved significant return on investment.

In one dental clinic, Khasawneh’s team implemented “intelligent double-booking” models, allowing them to increase their patient base by four patients a day and produce additional revenue of $283,000 in a single year. This convinced the provider to implement the scheduling system at its physical therapy clinic. After adjusting the model and plugging in the historical data for the clinic, the additional revenue approached $650,000. And while this system has not been widely applied, Khasawneh believes there is a promising future. “I think there is tremendous potential for turning this into a commercial decision-support system that will stand alone or integrate into an existing scheduling system for maximum impact,” he says.

It’s easy to see how better scheduling can increase a clinic’s bottom line. But Khasawneh is most concerned about the scheduling system’s impact on patient health. The true value in efficient scheduling lies in the fact that more patients can be treated in a shorter period of time. For Khasawneh, “speed of service is critical and has a very explicit impact on the quality of care. Hybrid scheduling, which combines an optimum mix of traditional scheduling with walk-in and open access, brings patients into the clinic faster, reduces the time spent in the waiting room, and hence reduces the burden on emergency rooms.”

What happens if a patient is five minutes late? Or if two patients show up for the same time slot? The hybrid scheduling system allows clinic managers to understand the impact of such uncertainties on their overall schedule. “If overbooking increases wait time by more than five or seven minutes, our model will tell us not to overbook — we only overbook if the increase in wait time is insignificant, keeping in mind the importance of patient-centered care,” Khasawneh says. “This opens up a slot to another patient who also has healthcare needs. So, while one patient may be slightly inconvenienced, the overall impact on the community’s healthcare needs is positive.”