Bandages can deliver radiation to lesions

Anthony Di Pasqua says a simple bandage can be used to apply radiation to a lesion. Image Credit: Jonathan Cohen. 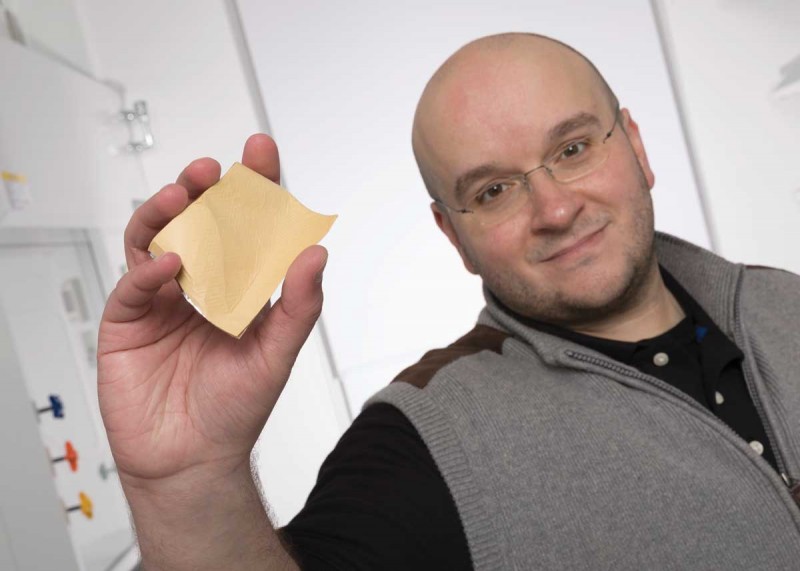 Anthony Di Pasqua says a simple bandage can be used to apply radiation to a lesion. Photography: Jonathan Cohen.
By Merrill Douglas, MA ’82

A sunny week at the beach might make for a delightful vacation, but there’s no joy in the cancer that might arise from too much exposure to ultraviolet rays. Scientists estimate that one in five Americans will develop skin cancer at some point. Many of us will turn to surgery, radiation or both to rid ourselves of potentially dangerous lesions.

Anthony Di Pasqua, assistant professor of pharmaceutical sciences at Binghamton University, hopes to make radiation treatments for the most common skin cancers faster, simpler and less unpleasant, and to reduce the risk of harm to healthy skin.

Di Pasqua and a collaborator have formed a company, DB Therapeutics, to develop a bandage that delivers radiation to a cancerous lesion. On Sept. 1, the company took up residence in the University’s Koffman Southern Tier Incubator in downtown Binghamton.

“We’re hoping that dermatologists and radiation oncologists will be excited about this product,” says Di Pasqua, who joined Binghamton’s new School of Pharmacy and Pharmaceutical Sciences in 2016.

Skin cancer comes in three varieties. The type you’re least likely to get, melanoma, is also the most likely to metastasize. Far more common are the nonmelanoma skin cancers, mostly basal cell or squamous cell carcinomas. While less deadly than melanoma cancer, these conditions can prove dangerous if not treated promptly. Researchers estimate that cases of nonmelanoma skin cancers will double by 2030.

When the treatment for nonmelanoma skin cancers includes radiation, the patient will probably spend several sessions engaging with a complicated piece of equipment that delivers X-rays to the lesion. “With such therapies, the patient needs to remain still. If the lesion is on the face or neck, the physician may put an immobilization device around the patient’s face,” Di Pasqua says. “It’s not optimal for patient comfort.”

Di Pasqua and his collaborator, Kenneth Balkus, professor of chemistry at the University of Texas at Dallas, want to replace the machinery with an adhesive bandage infused with radioactive nanoparticles made from an element called holmium.

“You can make the bandages while the holmium is nonradioactive, so you can produce them in large quantities and store them,” Di Pasqua says. As needed, DB Therapeutics will send bandages to a reactor center, which will bombard them with neutrons. That turns holmium-165 into radioactive holmium-166, which emits beta particles and gamma photons. “The beta particles damage the DNA of cancer cells,” he says.

A doctor who orders bandages for a patient can use a gamma counter to measure the rate at which the holmium emits gamma photons, confirming the dose of radiation in the bandage.

Before treatment, the doctor will order a specific-sized bandage, so the radioactive surface matches the size and shape of the lesion. This will ensure that only the lesion receives radiation, reducing the chance of damaging healthy skin surrounding the cancer. Di Pasqua and Balkus have used the bandages successfully on mice to shrink nonmelanoma skin cancers.

When using the bandages on humans, instead of sending each skin cancer patient to a procedure room with X-ray equipment, physicians will treat multiple patients in a room set up like a lounge. “The bandage is simply placed on the patient. They can relax in a comfortable chair in a regular room and read magazines or watch TV,” Di Pasqua says. A patient will come in for several treatments, each lasting less than two hours.

In some cases, physicians might use the therapeutic bandages instead of surgery.

Not only will the treatment be more pleasant for patients, but it could eliminate the need to travel to a specially equipped facility. With the bandages and a license to employ radiation, a dermatologist could treat nonmelanoma skin cancers right in his or her office.

Di Pasqua and Balkus developed the radiotherapeutic bandages while Di Pasqua served on the faculty of the College of Pharmacy at the University of North Texas, in Fort Worth. At Binghamton, he has been working on a gel that might someday be used on skin cancers either alone or together with the bandage. “Having different options is always good — whatever is best for the lesion,” he says.

A native of central New York, Di Pasqua came to Binghamton from Texas in order to live closer to his family. “But I also liked that the School of Pharmacy and Pharmaceutical Sciences is developing a very strong research program,” he says.

Faculty at Binghamton are doing high-quality research, just as they are at the nation’s highest-ranked pharmacy schools, says Gloria Meredith, dean of the School of Pharmacy and Pharmaceutical Sciences. “We’ve been in existence for only a year and a half, but we’ve already submitted $14 million in grants to the National Institutes of Health and received about $4 million.”

Bringing the bandage to market

While teaching courses and pursuing new research, Di Pasqua also will devote time to DB Therapeutics. In August, the company received a significant investment to help the invention make the transition from lab to clinic. DB Therapeutics has hired an employee — one of Balkus’ former grad students — to develop best practices for manufacturing the therapeutic bandages. Once the company has that process nailed down, it will be able to contract with a vendor to produce bandages for sale.

In addition, the company will conduct studies to find out if the bandages produce irritation or other toxic effects, Di Pasqua says. “Then we’ll go to the Food and Drug Administration (FDA) to find out what our next steps are to go into clinical trials. We hope to have a commercial product by 2022.”

Di Pasqua credits Binghamton’s Entrepreneurship and Innovation Partnerships program with introducing him to the investment group that has backed DB Therapeutics. “Although the technology wasn’t invented in Binghamton, the people here have really helped me launch it,” he says. “That speaks well for Binghamton and what they can do for future faculty coming into the School of Pharmacy.”

All tenants in the Southern Tier Incubator, and in the University’s Start-Up Suite in the Innovative Technologies Complex, receive mentoring from local experts in fields such as finance and marketing, says Per Stromhaug, assistant vice president for entrepreneurship and economic development at Binghamton.

The incubator team also connected Di Pasqua with Launch NY, a Buffalo-based nonprofit that helps entrepreneurs with specialized guidance. “They have access to networks of people who are experts on the FDA,” Stromhaug says. “One of those mentors is working with Anthony on the regulatory aspects of the product as he gets to market.”

DB Therapeutics is one of about 11 companies to move into the Southern Tier Incubator since it opened in June 2017. Of those, Di Pasqua’s is the first genuinely high-tech company — one that doesn’t just employ advanced technology, but is developing new technology of its own, Stromhaug says. “We’re very excited about that.”

And Di Pasqua is excited about the prospect of producing a therapy that is easy to use and highly effective. “Skin cancer is a growing problem,” he says. “We think we have a simple solution.”