Interview with a Bearcat: Bobby Ahearn 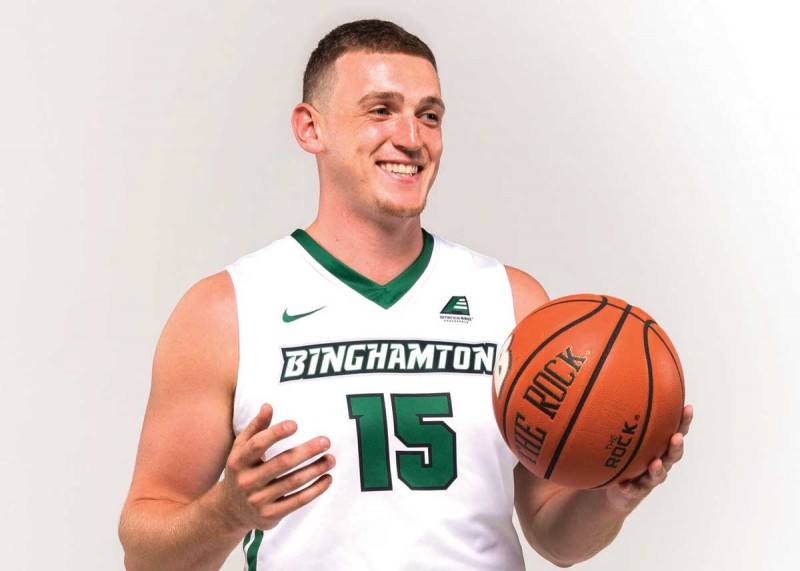 Robert (Bobby) Ahearn was born to play basketball. His grandfather Vince played at the University of Kentucky under coach Adolph Rupp. His uncle Vinny del Negro is a former NBA player and head coach of the Chicago Bulls, 2008–10, and the Los Angeles Clippers, 2010–13. His younger sister and brother play, while the rest of his family favors volleyball, baseball and football.

Every athlete fears a career-ending injury, says Ahearn, who has had his nose broken by a player’s elbow. His other fear isn’t about basketball.

“This past year I got my advanced open-water scuba diving certification. I was always afraid of sharks after seeing the movie Jaws. This is something to help overcome the fear.”

Ahearn has gotten tips from his uncle: “He showed me a lot of drills for things I need to work on, weaknesses in my game that I can improve.”

Ahearn’s also picked up a lot from his dad, a baseball and soccer player who has grown to love basketball. “He’s learned a lot [coaching younger brother Dylan] and he’s also taught me a lot of things about what I can do and improve. We’re both learning at the same time.”

Ahearn has lived with the same guys since freshman year, all of them basketball players: Dusan Perovic, John Schurman and Justin McFadden. What would they say is his worst habit? “Me being overly organized.”

“My grandmother and mom are really good cooks. They’re Italian, so they make spaghetti and meatballs, chicken parm. But my favorite food is chicken pot pie, and mom’s going to kill me for saying that.”

“I’m starting my own business; it’s called Ching. It’s a student marketplace where students can buy and sell things to and from each other. It’s still in development, but I have an office on campus and I’ve worked with the Office of Entrepreneurship and Innovation.”

Fitting it all in

“I went to a boarding high school; Mom and Dad weren’t there to tell me when to go to bed or when to eat, so I needed to learn time management.”