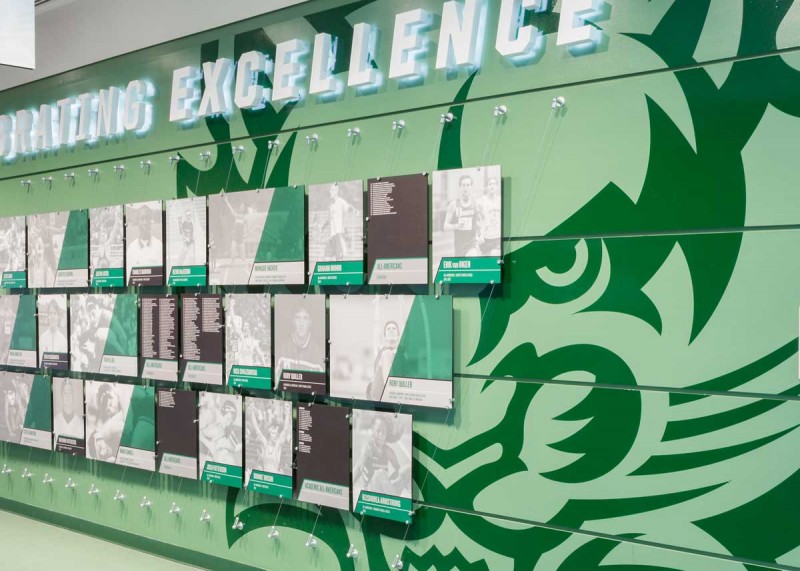 Binghamton University alumni Mollie Lehman ’00, Brendon Hitchcock ’07, Josh Patterson ’10 and the 1983 women’s cross country team will be inducted into the Binghamton Athletics Hall of Fame Class of 2017 in December.

The Athletics Hall of Fame Class of 2017 will be enshrined at the 22nd annual induction dinner and ceremony on Dec. 2.

Mollie Lehman (1997–2000) anchored Binghamton’s successful softball transition from Division III to Division II, playing shortstop and outfield, and hitting near the top of the lineup. A two-time all-region selection, she led the team to the NCAA Division III tournament in 1997 and 1998, and then capped her career with the ECAC Division II team title in 2000. Lehman set five program records; her .379 career batting average is still the best after 39 years of softball at the University. Lehman won the John Bilos Award in 2000.

Brendon Hitchcock (2004–07), a four-time all-conference first baseman, is the program’s all-time hits leader at 246 and second in career batting average (.360) and doubles (48). As a sophomore, he hit .399, leading the Bearcats to their first America East postseason berth. Two years later, Hitchcock was named America East Player of the Year after hitting .366 with 39 RBI as Binghamton won its first America East regular season title. He won the Jake Pitler Award in 2007 before signing a professional contract.

Josh Patterson (2006–10) became Binghamton University’s first Division I wrestling All-American when he placed seventh at 174 pounds at the 2009 NCAA Championship. He graduated as a four-time NCAA qualifier and two-time conference champion. In his junior year, he led the entire nation in both wins (46) and pins (22). He was named Most Outstanding Wrestler at the 2010 Colonial Athletic Association Championship and finished his career with 123 wins, the second-most in program history. Patterson was Athlete of the Year in 2008–09 and won the John Bilos Award in 2010..