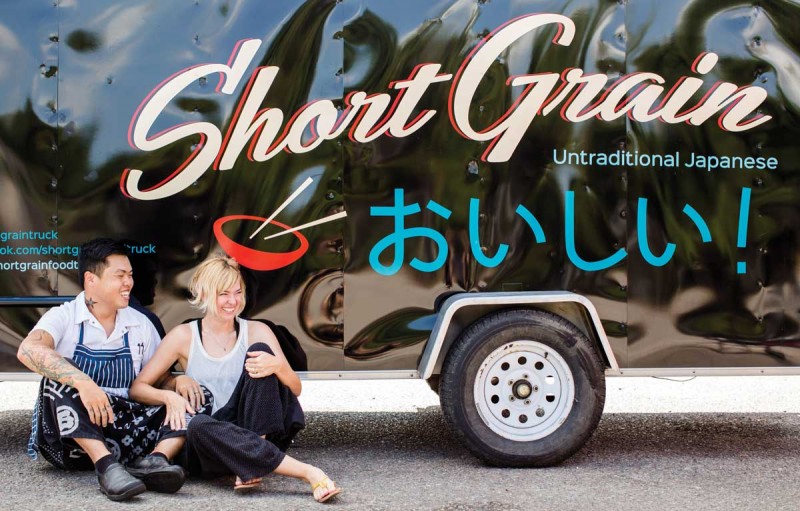 Corrie (Wachob) Wang ’00 and her husband, Shuai
By Steve Seepersaud

A food truck serving Japanese cuisine on a street corner in Charleston, S.C.? The image is so different that it almost doesn’t make sense. That’s the beauty of it. Corrie (Wachob) Wang ’00 co-owns the truck, and the business is eating the lunch of traditional eateries.

Wang and her husband, Shuai, launched Short Grain in 2014, and in two years it went from a fledgling operation to being named one of the country’s Top 50 Best New Restaurants by Bon Appetit.

The Short Grain story started up north when Corrie, a waitress, and Shuai, a chef, helped launch a restaurant in New York City. Tired of the super-fast-paced life, the Wangs hit the road to help a friend open a restaurant in Charleston. Not long after unpacking the moving truck, they learned the new project was way behind.

“We had left our life in Brooklyn, and it was like, ‘now what?’” Corrie Wang says. “We wanted to be in the food business, but didn’t want to work for anyone else. It’s hard to get a good restaurant location in Charleston. You’re either paying a lot to buy a site, or sinking a ton of money into repairs.”

So they decided on a roving restaurant, but the beginning was rough. You must be invited to the best locations. And, Wang says, mastering the logistics was mentally and physically exhausting.

“Packing and unpacking everything on the truck every day, we were constantly forgetting things. One time, we left a big cooler at the commissary kitchen that had all our food in it.”

“Once the awards started to come in, we knew we had made it,” Wang says. “We were lucky. We had come up with the right thing at the right time. We offered what the people in Charleston were craving, whether they knew it or not.”