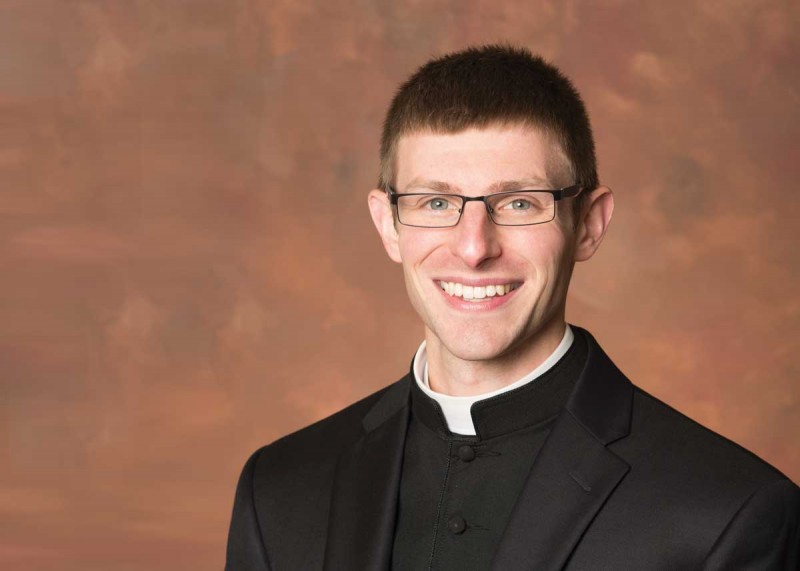 While many School of Management alumni are focused on climbing the corporate ladder, Matthew Lyons ’10 entered a profession requiring a vow of financial modesty. In spring, he was ordained as a Roman Catholic priest in the Diocese of Syracuse.

“This was something I always had in mind — on and off — since I was a young boy,” says Lyons, a native of Endicott, N.Y., and associate pastor at Holy Family Church in suburban Syracuse. “In high school, I started to take my faith more seriously, and [pursuing the priesthood] would come up in prayer, but I didn’t act on it.”

Instead, he enrolled in SOM and considered a career as a financial planner. As he attended events where alumni would return to campus and talk about their careers in business, he still had the priesthood on his mind.

“It came time to graduate and I was at a crossroads,” he says. “Do I get a job or enter the seminary? I spent a lot of time talking to the priests I knew and it helped me make a decision. I figured, if I’m going to enter the seminary, now is the time.”

Lyons says his finance degree is useful as he organizes financial records for parishes around the diocese, including Holy Family and his home parish, St. Joseph’s in Endicott. He also says the School of Management — where he collaborated with students from various regions and countries — fostered a sense of cultural sensitivity required in his work.

“In the priesthood, there is a concept called ‘formation.’ You’ve been formed into what you are now. For me, that formation started in Binghamton. I got a formation in business and in the world around me.”

Young men like Lyons are exceedingly rare. Many regions, Central New York among them, are experiencing priest shortages as retirements aren’t offset by new recruits. Priests are called to do more, sometimes covering as many as four churches. Lyons sees this as a challenge and an opportunity.

“Looking ahead, there might be a new revival,” Lyons says. “I see a lot of devout people around me who are willing to give themselves to the church. People are willing to help in lots of ways, and I’m sure we’ll always have the help we need.”