Faculty, staff and students in the Department of Geography are tracking the demographics of the neighborhood where the University's new Health Sciences Campus is taking shape.

A screen shot of the Johnson City Redevelopment Story Map, which includes demographic information, video interviews, aerial footage and more documenting the current status of the neighborhood where the Binghamton University Health Sciences Campus is being constructed. jc-redevelopment.binghamton.edu. 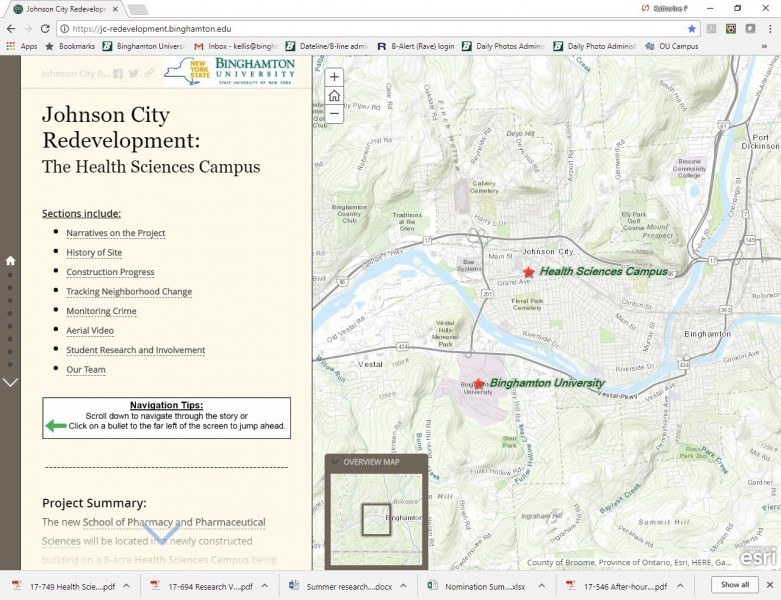 A screen shot of the Johnson City Redevelopment Story Map, which includes demographic information, video interviews, aerial footage and more documenting the current status of the neighborhood where the Binghamton University Health Sciences Campus is being constructed. jc-redevelopment.binghamton.edu.
By Katie Ellis

Decades ago, Johnson City was a vibrant, vital village in the Southern Tier of New York – part of the valley of opportunity created by the Endicott Johnson Corporation that, at its peak, employed 24,000 people and produced 52 million pairs of shoes a year.

Johnson City looks very different today – no bustling factories and plenty of empty storefronts. But with the construction of Binghamton University’s Health Sciences Campus on Corliss Ave., major changes are underway in the village.

And the Johnson City Revitalization Project – a story mapping project that organizes project information in a manner that tells the story of the revitalization process – aims to track those changes in a way that hasn’t been done before.

With assistance from undergraduate and graduate students and Geography department faculty and staff, Distinguished Service Professor John Frazier is charting new territory by documenting the current status of the Johnson City neighborhood where the Health Sciences Campus is taking shape – with plans to continue the documentation well into the future.

“We’re looking at the business side and people who are redeveloping buildings in the area, as well as how the redevelopment will spill into other areas,” said Frazier. “Most studies like this take place 20 years out, but we’re starting on the ground floor with this community and how it has degraded since the 1960s. Now we’re beginning with the contemporary picture to see the impact of state dollars and University assistance in growing the economy. It’s a good initial picture.”

Developing the initial picture has required looking at a number of factors beyond the history of the site and construction progress. A deep dive into demographics has looked at:

• crime incidents by type and location

Interviews have been conducted with stakeholders including business owners, community members, planners and government officials. Aerial video is also documenting the changes to the neighborhood as the Health Sciences Campus rises on the former shoe factory site.

“Social equity is key,” said Frazier. “What happens is gentrification, pushing poor people out. There’s a lack of awareness of what is really being proposed for housing and jobs.

“But we have to look at both sides of the coin. There are some people who believe crime results from the prevalence of low-income residents and they want to get them out. The other side is these are poor people who shouldn’t be painted with a broad brush and who need help.

“That’s why we want to do this project in the most comprehensive way we can – to address all of these issues that occur when we do revitalization,” Frazier added. “We want this to be a demonstration project of how revitalization can and should be done. The literature on gentrification is negative and this project offers the opportunity to do it right and be a demonstration project.”

Both the people involved in the project and their ability to use the technology required have been vital to creating this story map, said Norah Henry, associate professor of geography.

“We have the ability to coordinate external data sets, such as tax parcel information and crime occurrences, with some of our own data, include structural conditions of residential properties generated by our trained student team; conducted drone overflights that have produced both video and individual frames that corroborate the structural conditions and the existing land uses and land cover of the study area; and included student teams in the process,” Henry said. “Our students have learned the how-to of structural conditions assessments, how to develop flight plans for the drone pilots, and how to use very new software that extracts drone imagery and produces 2-D and 3-D maps of the study area.”

Frazier agreed that an important element in creating this story map is the broad effort of the geography team that includes Kevin Heard, who led the technical team in creating the story map; the technical staff and faculty including Luke Willis, Norah Henry, Jay Newberry, Chengbin Deng and Qiusheng Wu who completed the drone flights and land-use change analysis; and staff members Brendan McGovern and Willis who donated their time for video preparation and editing of interviews and fieldwork.

This team presented to graduate students and geography majors this past fall, focusing on the importance of story mapping the impact of the Health Sciences Campus.

With funding from New York state to construct the pharmacy building in Johnson City, as well as Regional Economic Development Council monies, “The idea kept growing,” said Binghamton University President Harvey Stenger. “Now we’re building this Health Sciences Campus and we have to think about our impact on society. Will it make the region better or just Binghamton University better? Is it part of our mission to make the region better? Will it be better for the neighborhood? We’re adding these questions to our original plan of building the School of Pharmacy and Pharmaceutical Sciences.

“That’s why we want to do this story mapping project,” Stenger said.

The project has a website that includes video narratives and transcripts from several of the interviews that have been conducted, a section that tracks neighborhood change where hard data collected by the municipalities is housed, an interactive map that shows crime incidents animated over time and video discussions on student involvement.

Already 18 months of work into the project, Frazier and his colleagues want to maintain it and expand it to the entire Triple Cities area in the future.

“We’re building a historical record and painting a picture that can be updated moving forward,” said Frazier. “How did this happen? This is documentation of how the Health Sciences Campus will develop and evolve over time.”

Staff support has been vital, and the project wouldn’t have gotten this far without student help and analysis, said Frazier. “First, we have students read the literature, and then, after they have a knowledge base, we incorporate them into the project. We have weekly discussions and talk about why the literature is relevant, but the field work the students do is really critical to the project – including looking at land use, vacancies and what we can learn from them.”

“It takes hard work to collect the information and to keep it persistent,” said Stenger.

“We hope this can be a demonstration project for how to monitor economic revitalization,” said Frazier.