Project will take place at HCA in Johnson City, NY 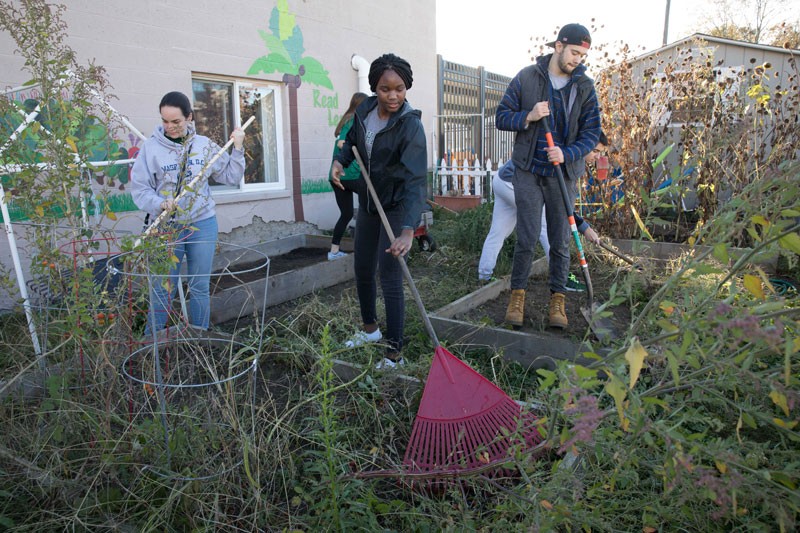 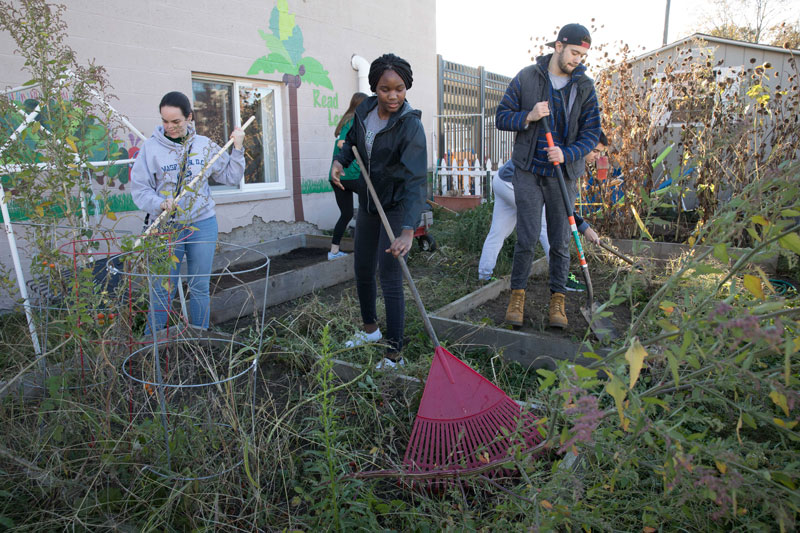 PwC Scholars clear out the garden at HCA in Johnson City, NY on Oct. 22, 2017. This will be the site of their 2018 community service project.

One of the most satisfying parts of being a PwC Scholar is helping with the annual community service project. This year, the scholars are working with HCA (which stands for Helping Celebrate Abilities; formerly known as Handicapped Children’s Association) in Johnson City, NY. HCA’s preschool offers differently-abled children between the ages of 3 and 5 an enriching and diverse environment to learn alongside their peers. The scholars will expand the preschool’s outdoor area into a handicapped-accessible garden that can function as an outdoor classroom, as well as install interactive sensory components throughout the interior of the building.

The scholars have already begun working with HCA, holding fun activities for the children throughout the fall semester. One event helped preschoolers prepare and serve food for their annual Thanksgiving feast, while another was a holiday-themed event that included arts and crafts, food, stories and holiday music performed by Binghamton University junior Patrick Carroll and senior Elliott Vogel.

This spring, there will be a stone-decorating activity, where children can personalize stones that will be placed in the garden. The scholars also plan to assist with HCA’s annual “A Tasteful Day with HCA” fundraiser.

On April 20, this year’s project will culminate with the Community Service Day. Current scholars, alumni of the program, and professionals from PwC in New York City will gather in Johnson City to assist with the planned installations. The day allows participants to reflect on the successes of the past year as well as the program’s ability to have an impact on the greater Binghamton community.

The annual community service project is made possible through the many hours that go into planning, preparation and fundraising. This year’s fundraising efforts are already in full swing, with the goal of raising $15,000.

The school year kicked off with the annual Ignite competition, which pairs students and professionals to compete in several unique challenges. With 120 students and 44 professionals from 14 firms participating, the scholars generated a net profit of $7,964.

Two fundraisers planned and executed entirely by freshmen in the scholars program also took place in the fall. The first, Trivia Night, had student teams compete in multiple rounds of trivia, with the winning team of each round receiving an Applebee’s gift card. Over 100 students participated, which is one of the highest turnouts to date for a freshman fundraiser.

The second freshman fundraiser, Survivor Binghamton, pitted teams of between six and eight students against each other in a number of physical and mental challenges to win Dunkin Donuts gift cards. Seven teams participated, with this year’s PwC Scholars e-board coming in last place.

The freshman fundraisers netted a profit of $379. Although the profits are somewhat marginal, the group says the leadership experience gained by the freshman scholars will be invaluable as they develop into future leaders of the program.

The spring semester started with a Chipotle fundraiser on the first day of classes, in which anyone who mentioned “PwC Scholars” at the register would contribute 50 percent of their purchase to the community service project. Despite the heavy snowfall, a number of scholars weathered the icy roads with their friends to buy burritos and support the event. With 178 customers participating, the scholars raised an additional $913 for the project.

Other fundraising events for the spring semester include the annual “date” auction, at which students bid on unique networking events with professionals, and the MarketWatch stock-trading competition, which is making a return after a one-year hiatus. The competition, which runs March 12–29, is sponsored by Visions Federal Credit Union, which will provide both the prize pool and financial planners to help with the kickoff event. Some of the planners will compete as well. The competition involves trading stocks in virtual portfolios using the Marketwatch stock-trading simulation.

The scholars hope to expand the competition by inviting PwC alumni to compete in the event, giving current students a competitive opportunity to outperform the professionals. The group hopes to get more information out soon to alumni interested in participating.

Questions about fundraising can be directed to PwC Scholars Program VP of Fundraising Elliott Vogel at evogel2@binghamton.edu.