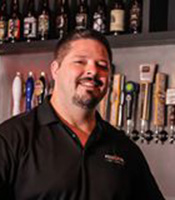 A native of the Binghamton area, Polhamus is a principal of PTM Hospitality Group, Inc., and managing partner-owner of Food & Fire BBQ-Taphouse restaurants in Johnson City, N.Y. and Moosic, Pa. markets. He graduated from Chenango Forks High School and studied at SUNY-Broome Community College and the College at Brockport, State University of New York, prior to transferring to Binghamton University. Polhamus was a student-athlete, participating in both collegiate football (at Brockport) and wrestling (at Binghamton). After graduating with a bachelor's degree from Binghamton University, he worked in business-to-business sales and spent several years in the hospitality industry as a director of sales and general manager for Marriott Hotels in the Binghamton, N.Y., and Richmond, Va. markets. Prior to opening Food & Fire in 2013, Polhamus spent seven years as the associate director of alumni relations at Binghamton University.

Polhamus' fundamental knowledge of the hospitality industry is bolstered by his time as a professional in the hotel business and by event planning experience gained during his tenure at Binghamton University. He has specific expertise in the areas of sales and marketing, business operations, large-scale event planning and catering, volunteer management and customer/guest satisfaction.

He has served as a volunteer and board member for the Community Hunger Outreach Warehouse (CHOW), Central New York Make-A-Wish Foundation, A Room to Heal, United Way's Day of Caring and the Binghamton University Alumni Association. He remains involved with his alma mater as a volunteer, donor and sponsor, supporting Binghamton University Athletics and the Alumni Association, and serves as a mentor in the Harpur College Liberal Arts to Careers Externship program (LACE).

His interests include golfing, hosting gatherings with family and friends, and home brewing. An avid New York Giants fan and season ticket holder, Polhamus is a self-proclaimed "tailgating expert" and has spent time on the competitive cooking circuit. He currently lives in Endwell, N.Y., with his wife Jane, a two-time graduate of the Decker College of Nursing and Health Sciences at Binghamton University, and their three children.