Binghamton around the world

As our alumni have done spring and summer globetrotting, they’ve apparently remembered to pack their BingPride alongside their passports, sunscreen and other necessary items. In last month’s newsletter, we asked for photos of alumni wearing Binghamton gear in exotic locales, and some of you answered the call! 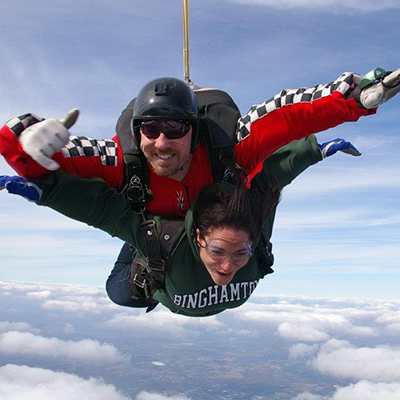 You could say Francesca Blecker Bullerman ’04 took our University’s name to new heights. A while back, she went skydiving with a few other alumni and wore a Binghamton sweatshirt when she took the plunge.

“I don't think I spent too much time thinking about my outfit that day, being that we were on the road to our skydiving adventure pretty early in the morning,” she said. “I guess I just figured, ‘a bunch of Bing kids are jumping out of a perfectly good airplane; I should probably wear this hoodie to commemorate the occasion.’” 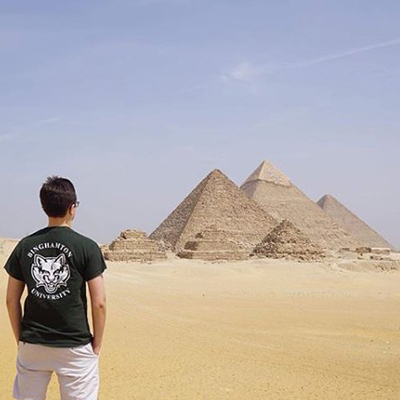 Conrad Taylor ’17 has been quite adventurous lately. In this month’s Alumni Connect, he shares his story of being an extra on the hit Amazon show The Marvelous Mrs. Maisel. Further from home, he was rocking his Bearcat gear as he marveled at the ancient pyramids in Egypt.

“I’m proud of the fact that I went to Binghamton University,” Taylor said. “It’s a massive part of who I am today and it’s something I always carry with me, inside myself and on the T-shirt I wore to the pyramids. Representing Binghamton is a way of representing my identity as I meet strangers and travel to foreign places.” 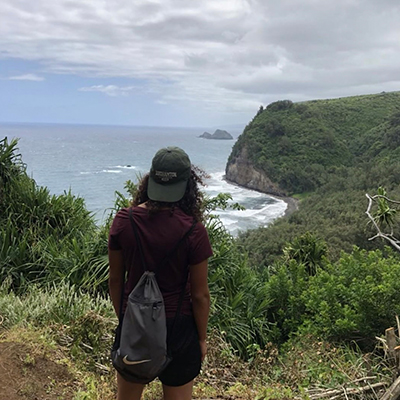 Is there a better way to celebrate graduation than by going on a cool trip? Recent College of Community and Public Affairs grad Rosa Ardezzone ’18 posed for a photo at the summit as the sun rose on what was sure to be an amazing day of sightseeing at Haleakala National Park on the island of Maui in Hawaii. 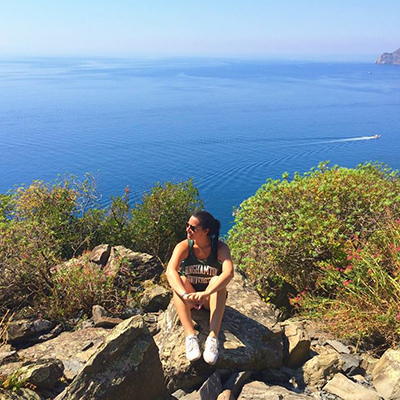 Jessie Rubin ’13 shared some photos from a trip to Italy, including one taken during a short break in a scenic hike at Parco Nazionale delle Cinque Terre in the province of La Spezia, Liguria. 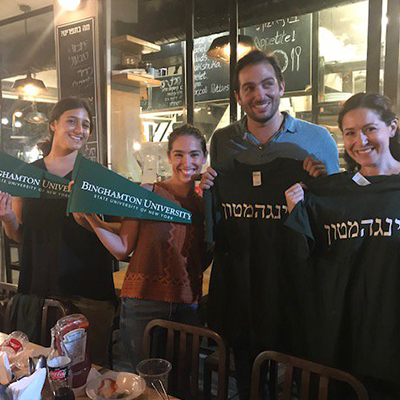 On July 23, about 25 alumni attended a Binghamton gathering in Tel Aviv, Israel. Michael Sugerman, senior lecturer of anthropology, joined the group and gave a brief campus update. Prior to this, the most recent alumni event in Israel has been two summers ago. Many alumni in attendance said they don’t want to wait another two years to get together, and they’ll start plans soon for another event.

The summer isn’t over just yet. Going anywhere exciting? If so, take a photo of yourself in Binghamton gear and share it with us on social media; tag us at @binghamtonalum. We love seeing the #bingpride getting around!