Homecoming 2018: Nostalgia, pride and a glimpse of the future

The band playing in the Mandela Room became harder to hear as happy chatter filled the air along with smiles, hugs and picture taking as friends reconnected for the Educational Opportunity Program (EOP) 50th anniversary celebration Oct. 6.

"The event was sold out and very well attended by a number of classes,” said Taris Rodney ’08, keynote speaker. “We had alumni there from the first class of EOP, and the first EOP director attended, which was awesome."

More than 1,000 alumni returned to campus Oct. 5-7 for Homecoming, a weekend with numerous opportunities to catch up with friends, visit the places where memories were made, advise current students, and learn what’s new and planned at the University.

The Alumni Center in Old O’Connor Hall was a hot spot of activity Friday and Saturday, hosting the Welcome Center, opening Happy Hour and live screening of Binghamton University T-shirts sponsored by Anita ’86 and Randall ’87 Borkenstein.

People decked out in green filled the parking lots near the Events Center Saturday afternoon for the traditional tailgate party preceding the men’s soccer game. The Saturday celebration didn’t end after the fireworks show. Instead, it moved downtown as Bing Brews and Bands showcased some of the city’s coolest venues, bands and microbrews.

“This event was a lot of fun to put together,” said Doug Camin ’05, co-leader of the Binghamton area’s alumni chapter. “It’s great to bring out local musicians and highlight the breweries here in Binghamton for everyone coming back, particularly when so many positive changes have happened downtown in the last few years they may not know about.”

About 35 alumni came together with student-athletes and coaches at the men’s tennis reunion.

“Returning alumni traveled from as far away as North Carolina and represented teams from the 1960s through the 2000s,” said Neal Roher ’80, who led the efforts to plan the reunion. “The camaraderie was palpable as alumni from different eras got to know each other and the remarkable student-athletes comprising today’s team. We made a point to encourage the young men to make the most of their time as student-athletes at Binghamton and told them we look forward to them joining us down the road.” 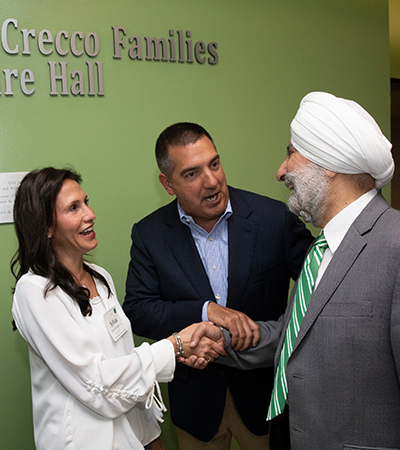 One of the most visible images of love for the University and family togetherness could be seen at the dedication of Lecture Hall 7 as the Aversano and Crecco Families Lecture Hall. Paul Aversano ’93 and Sylvia (Crecco) Aversano ’93 made a gift to the University to support multimedia instruction and Services for Students with Disabilities. About 20 family members were present for the ceremony, which included a surprise reveal of a plaque outside the room bearing the names of the Aversanos’ parents.

“In today’s world, it’s no longer acceptable to just do well,” Paul Aversano said. “You have to do well while doing good. Sylvia and I feel our parents were the ones who enabled [our success]. It’s not just about putting our names on this space, we wanted to honor the University and our parents.”
Return to Top