We often think of candy bars and potato chips as fuel for America’s obesity epidemic, not as a consequence of climate change, but Amy Hyatt ’78, the United States Ambassador to the tiny Pacific island nation of Palau, linked poor nutrition to global warming.

“We have a rising ocean as ice caps melt,” Hyatt said during the TIER Talks® speaker event held Oct. 6, during Homecoming weekend. “As oceans take over the land, there is less land that can be farmed.” A PowerPoint slide showing chocolate bars and bags of potato chips told what’s being imported in Palau to offset the reduction in homegrown food.

“The Heat is On: Exploring the Effects of Climate Change” was the topic of this annual speaker event presented by M&T Bank and the Alumni Association and held in Watters Theater. Three alumni experts shared perspectives on efforts by large cities to address climate change, its spillover to small geographically isolated areas and how people can increase everyday awareness of the problem.

Seth Schultz, special advisor on science and innovation to the Global Covenant of Mayors, discussed the commitment of large cities to abide by the terms of the Paris Agreement on climate change, despite President Donald J. Trump’s announcement last June that the United States would withdraw. Schultz shared some of the progress already seen in large cities such as New York, which has saved $1.5 billion through a green stormwater management infrastructure, and Mexico City, which has reduced transportation spending by $65 million following the installation of bike lanes.

“Cities are the confluence of where things happen,” Schultz said. “Cities are where change happens first, where there’s a concentration of people and a density of infrastructure. Cities have not been debating whether climate change is happening. They’ve been dealing with its consequences.” 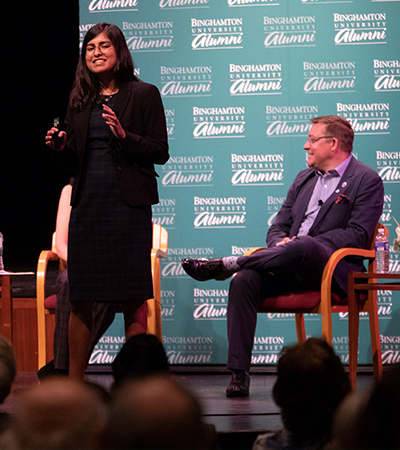 Tasfia Nayem '14, graduate student at Duke University's Nicholas School of the Environment and former climate change communicator with the federal Environmental Protection Agency, said climate change isn’t a concern only for large cities or coastal areas. People in landlocked states, she says, deal with prolonged allergy seasons and increased incidence of Lyme disease because of climate change. Why isn’t more being done? She says there’s too much apathy and too little conversation.

“[Most] Americans acknowledge that climate change exists,” she said. “People are simply not talking about climate change. The more we talk about it…the more we recognize the connection between climate change and the activities we are doing. That recognition leads to us taking action in our own lives.”

TIER Talks®, introduced at Homecoming 2014, leverages Binghamton alumni and faculty to share knowledge on hot topics with the campus and global communities. Michelle DiGiacomo ’15, manager of the M&T Bank branch in Kirkwood, said the company is proud to sponsor the program because it showcases the best of what the University has to offer.

“M&T prides itself on being a community bank,” she said. “To have these alumni come back for TIER Talks, this is a wonderful resource for our community.”

James Pitarresi, vice provost and director of the Center for Learning and Teaching, was the moderator for the session.