Ryan Omoruyi ’15 is one of many Binghamton University students to take advantage of the opportunity to study abroad during his college career. Having studied Japanese for nearly a year and a half at Binghamton, he quickly decided on a program with Kokugakuin University in Tokyo, Japan, hoping to improve his Japanese language skills. The experience turned out to be more beneficial than he could have hoped for. 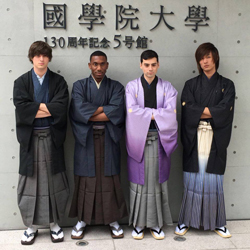 “I realized that when I was learning Japanese in a classroom setting in America, it was very limited. We would spend an hour or so going over verbs, grammar and pronunciation, and we would have a few conversations here and there, but after the class is over, you don’t really have any time to practice or any experience with the language any more. Japanese stays in the classroom; you have to use English when you go back to the real world. It was very limited learning the language in a closed environment like that. But when I went to Japan, I was immersed in Japanese all the time. I was there for six months, and I feel like I learned so much more in those six months than in a year and a half taking classes.”

And while he was in Japan, Omoruyi says he noticed that the Japanese students he became friends with were just as interested in practicing their English with him as he was in practicing Japanese.

“That really struck a chord with me. I was interested in how people can learn so much more being immersed in [the language], being able to interact with people who are native speakers. That led me to this idea—I know a lot of people don’t have the time or resources to study abroad and immerse themselves completely in a new culture and a new environment where they can speak the language all day long, so I decided I wanted to try to simulate that environment by having a program where you can actually interact with native speakers [without having] to study abroad.”

Omoruyi began by reaching out contacts he had made at Kokugakuin University, asking if there was interest among students there for a program like this. The director of the program he participated in as an exchange student recruited a number of interested students, and they decided to test the idea out on a small scale to start. Omoruyi recruited a few friends and acquaintances with Japanese language experience to volunteer as teachers and in June of 2017, he held his first week of WordTango classes, using Skype to hold two half-hour classes of eight to ten students a day over four days. And it wasn't only college students who were interested in the opportunity to practice English with native speakers.

"We actually had another woman who wasn't a student, who was a bit older than the other college students we talked to. She was really interested in the program. It just goes to show that learning never stops. People still want to practice a language they've been learning and use it, whether they want to study abroad or just go visit a different country and interact with the locals."

The first set of classes included conversations covering a wide variety of topics, including fashion, food, baseball, music and television shows. In addition to practicing language skills, he sees this as an opportunity to connect different cultures.

"Some students said they would love to learn more about the food in America, like the different types of food in the midwest, the south, the northeast. So we would ask the teachers if they could have a conversation about food they've eaten when they went to New York City, or maybe in Pennsylvania they had a Philly cheesesteak and it was so delicious... So it's not a very strict classroom setting; it's a very informal, conversational environment, because that's how it was for me in Japan. When I was walking around Japan and talking to random people, I was still getting an education. I was still learning a lot by conversing with local people in a sushi restaurant. And maybe [the students and teachers will] make a new connection. Maybe they'll share contact information after the class and keep in touch. It's another way to create a global community."

Omoruyi counted that week as a success, saying that the students and teachers enjoyed the conversations and felt that it was a great way to learn without the pressure of being in a formal class. "It's easy to learn English and be able to read it and understand when someone is talking, but when you have to communicate and have the right pronunciations, that's something that's very difficult for people learning a new language."

While the WordTango program is still in early stages now, Omoruyi has big plans. "I want this to become something that lots of colleges can use all over the world." He would like to branch out beyond Japan to other countries, and also create a reciprocal relationship where American students can also practice their language skills with native speakers. This kind of growth would only be possible if he is able to automate the process, though, creating a web portal where students and teachers can connect on their own. He is hopeful that after completing the coding program he is currently enrolled in, he can use those skills, along with his background in graphic design, to get a website up and running. He also realizes that while the program is currently volunteer-based and free for students, he may eventually need to compensate the teachers in order to scale up the number of participants.

For now, though, he is planning another round of classes similar to the first round. But before he can reach more students, he needs to find more volunteer teachers. While having some background in education is a plus, he says teachers don't really need any background knowledge or special language skills, just a desire to help and a willingness to talk. He is hopeful that current Binghamton students will continue to show interest in volunteering.

"I wouldn't have had this opportunity without Binghamton University. That whole experience of going abroad to Japan is what sparked this idea, so I would love for fellow Binghamton students to take part in this initiative and let them be the first ones to have a go at this."