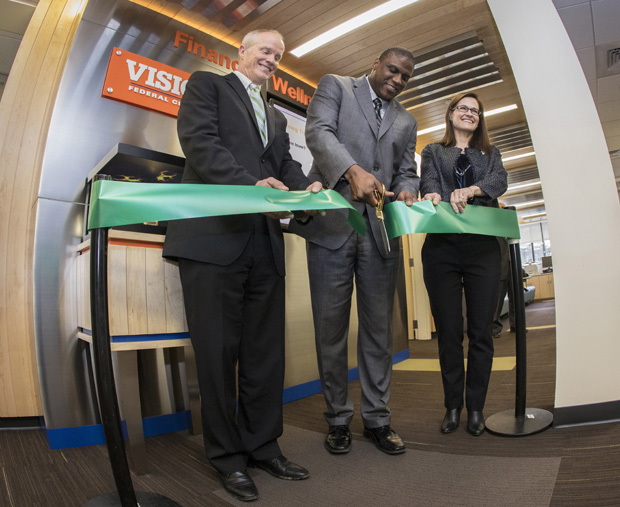 Students, University leaders and employees, and Visions officials took part in a ribbon-cutting ceremony Jan. 19 to mark the opening of the Financial Wellness Center. Located just inside the Fleishman Center entrance in the University Union, the Financial Wellness Center features an interactive display with web modules about topics such as budgeting, credit cards, saving, insurance, student loans and investments.

“What better place to learn how to manage your future finances or current finances than the place that’s trying to get you ready for your next job or perhaps all of your jobs for the rest of your life — right here at the Fleishman Center,” Binghamton University President Harvey Stenger said.

Kelli Smith, director of the Fleishman Center, said the center is “absolutely thrilled to shepherd this program.”

“We are one of the only — if not the only — career center in the country leading a financial wellness center,” Smith said. “The missions of career centers are changing and expanding. We have expanded the wealth of programs we offer so (students) can be successful when they leave Binghamton University. If they can’t manage their finances, it’s going to be difficult to secure a job or negotiate a salary and benefits.”

“The fact that we are able to work with (Barton) and tailor programs for our students is fantastic,” Smith said.

The Financial Wellness Center opens at a time in which seven in 10 college students in the national class of 2015 borrowed for their educations, owing more than $35,000 on average. Binghamton University students owe about $23,000 on average, Stenger said. The center and its workshops will not only educate students about loan repayments and saving money as adults, but also benefit students in their initial months at Binghamton University, Stenger added.

The center “could touch students from the time they are freshmen thinking: “Which meal plan should I choose?’ or ‘Should I live on campus of off campus next year?’” Stenger said. “Or ‘If I have a car, how can I manage those finances?’”

Founded in 1966 and headquartered in Endwell, Visions is a not-for-profit financial institution that features 44 branches and 180,000 members. For Visions President and CEO Tyrone Muse, the Financial Wellness Center is “a great opportunity” to partner with Binghamton University.

“We want to do something special,” Muse said. “When you bring all these students and recruits in, we want to show them why we think you are special and have something unique that nobody else around the country can say they have.

“This is just the beginning of how we can give back,” he added. “Now we have a home to point people to and an example of how we are trying to give back.”

“It takes vision to understand how important it is for a local community bank to come in and help us,” he said. “They are the experts. The contributions of Visions Federal Credit Union are greatly appreciated.”