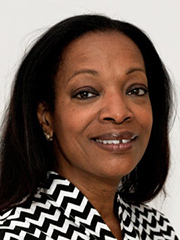 Prof. Patti Sellers (she/her) is an international criminal lawyer.  She is a Visiting Fellow of Kellogg College at the University of Oxford, where she teaches the Fundamentals of International Human Rights Law and the International Criminal Law course in the Master of International Human Rights Law program. She is also a Practicing Professor at London School of Economics and a Senior Research Fellow at the Human Rights Center of the University of California, Berkeley. In 2021, she was appointed as the Special Advisor for Slavery Crimes to the Office of the Prosecutor of the International Criminal Court. She was Special Advisor on Gender to the Prosecutor of the International Criminal Court from 2016-2020. Prior to that she was the Legal Advisor for Gender, Acting Head of the Legal Advisory Section and a prosecutor at the Yugoslav Tribunal (ICTY) from 1994-2007 and the Legal Advisor for Gender at the Rwanda Tribunal (ICTR) from 1995-1999.  Prof. Sellers was a prosecutor on the trial teams of Akayesu, Furundzija, Kunarac, Nikolic and Oric.  She has developed legal strategies that led to landmark decisions regarding sexual violence as constitutive conduct of war crimes, crimes against humanity, genocide, torture and enslavement under international criminal law.

Prof. Sellers advises governments and civil society entities and lectured extensively on international criminal law.  She has authored numerous articles, including, ‘Missing in Action: The International Crime of the Slave Trade’, 'Wartime Female Slavery: Enslavement?' and, forthcoming, 'The International Crimes of Slavery and the Slave Trade: A Feminist Critique."   She has testified as an expert witness before the Inter-American Court of Human Rights in the cases of J. v. Peru, Favela Nova Brasilia v. Brazil, Albarracín v. Ecuador and Lima and Others v. Colombia. She   is the recipient of the prestigious Prominent Women in International Law Award by the American Society of International Law. She holds an Honorary Doctorate in Law from the City University of New York, as well as an Honorary Fellow for Lifetime Achievement from the Law School of the University of Pennsylvania, her alma mater.

Prof. Sellers is a dual citizen of the United States and Belgium. Her partner is Dr. Pierre Viseur.  They have an adult son, Asres Viseur.  She enjoys reading, listening to spoken poetry and jazz. She eternally struggles with drafts of her writing yet persists.  She enjoys theatre and dance as well as the visual arts such as painting and sculpture.