Students who live on campus wait in line in the Mandela Room on Tuesday, Nov. 8, 2016 to vote in the general election. 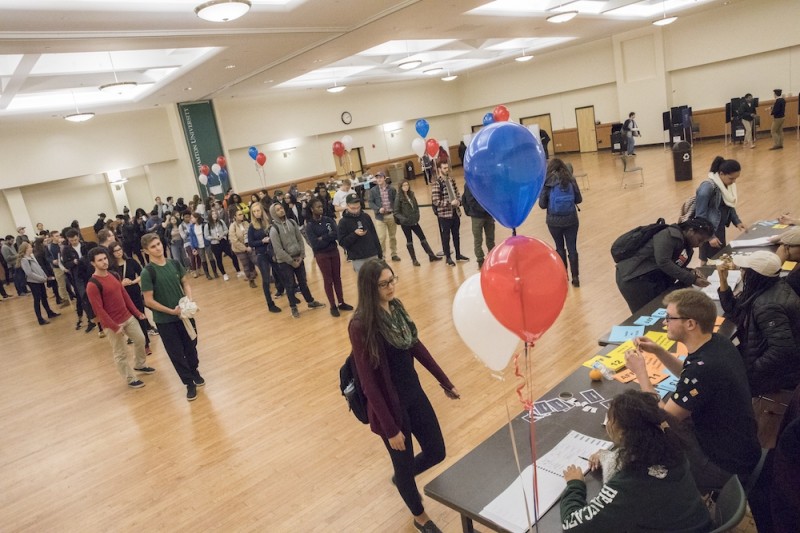 Students who live on campus wait in line in the Mandela Room on Tuesday, Nov. 8, 2016 to vote in the general election.

BINGHAMTON, N.Y. – The Binghamton University Center for Civic Engagement (CCE) will host an Election Day party at the on-campus polling location in the Tillman Lobby and Old Union Hall, in the University Union. Polls are open from 6 a.m.-9 p.m. Tuesday, Nov. 6; the main celebration takes place from 9 a.m.-6 p.m.

The goal of the Election Day party is to get students excited to participate in the political process. The party will also serve as a celebration of democracy and the efforts that students have made leading up to the election to engage their peers in the democratic process. There will be pizza, music, a politically themed selfie station and more.

The CCE’s nonpartisan political engagement coordination team — which includes Vote Everywhere Ambassadors sponsored by the Andrew Goodman Foundation, as well as other student interns and volunteers — has worked with student groups on campus, faculty members and community organizations (including the League of Women Voters and the Broome County Board of Elections) to help 2,787 students register to vote and request absentee ballots leading up to the mid-term election.

The CCE registered over 730 incoming students to vote during summer orientation sessions. Members of the political engagement coordination team also held mini-voter registration information sessions in classes, tabled in public areas on campus and participated in campus-wide voter registration events such as National Voter Registration Day on Sept. 25. In an effort to help students make informed choices, the CCE also partnered with Pipe Dream, the student newspaper on campus, to reach out to candidates likely to appear on students’ ballots in nine federal, state and local races with a questionnaire, asking them to discuss their platform, experience and campaigns.

For more information about the Election Day celebration or other voter engagement initiatives on campus, contact the CCE at 607-777-4287 or via email at cce@binghamton.edu. To learn more about the CCE, visit http://www.binghamton.edu/cce/.