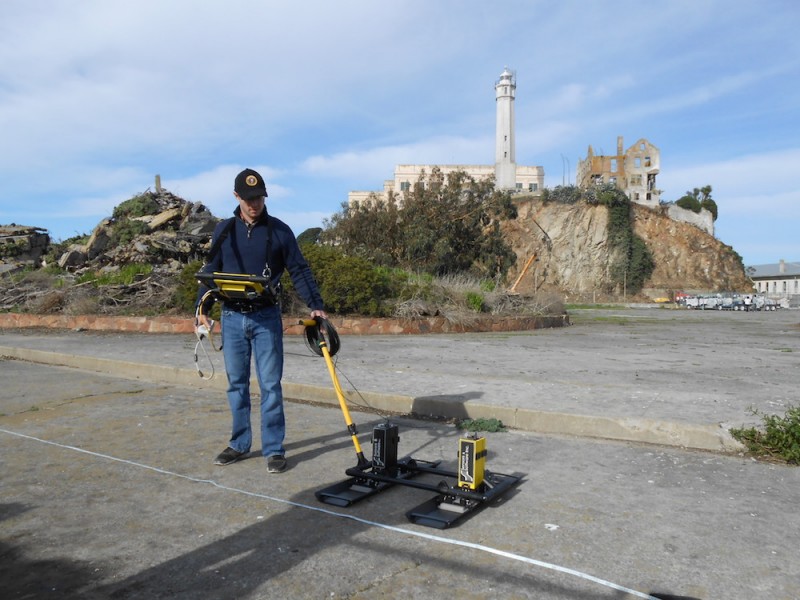 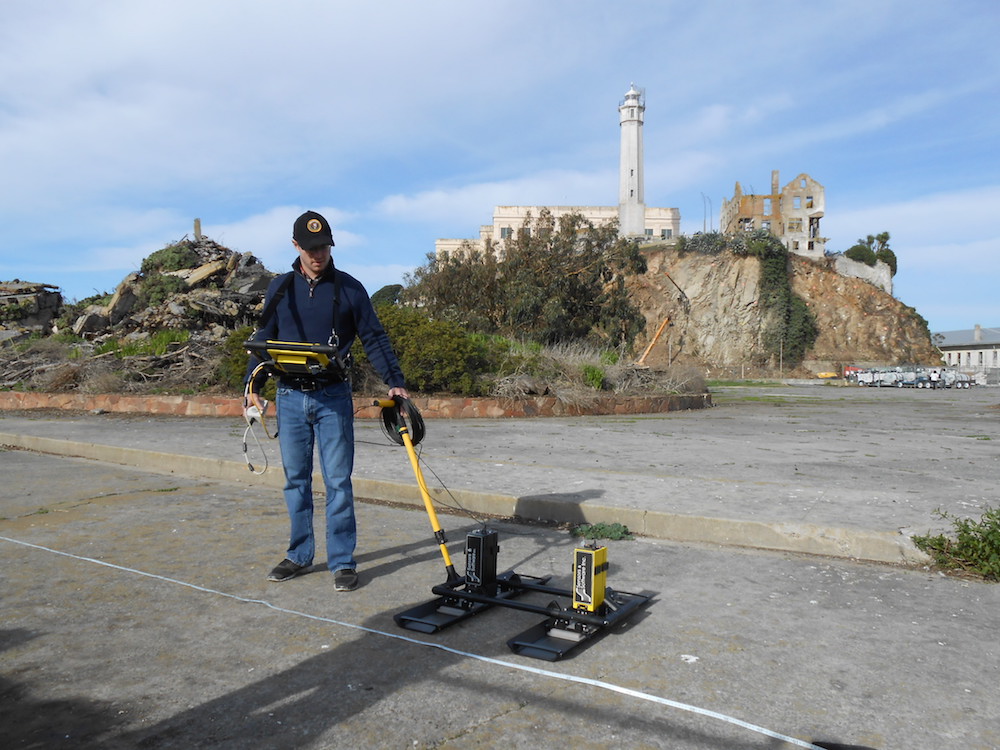 Binghamton University archaeologist Timothy de Smet and colleagues used terrestrial laser scans, ground-penetrating radar data and georectifications (the process of taking old digitized maps and linking them to a coordinate system so that they can be accurately geolocated in 3D space) to locate and assess the historical remains beneath the former recreation yard of the Alcatraz penitentiary. Image Credit: Timothy de Smet.

BINGHAMTON, NY – High-tech radar and laser scans have uncovered a hidden military traverse underneath the infamous Alcatraz penitentiary, according to research led by faculty at Binghamton University, State University of New York.

Binghamton University archaeologist Timothy de Smet and colleagues used terrestrial laser scans, ground-penetrating radar data and georectifications (the process of taking old digitized maps and linking them to a coordinate system so that they can be accurately geolocated in 3D space) to locate and assess the historical remains beneath the former recreation yard of the Alcatraz penitentiary. This unique, nondestructive research method revealed that remnants of buried structures, including a “bombproof” earthwork traverse along with its underlying vaulted brick masonry tunnel and ventilation ducts, ran east to west beneath the recreation yard of the Alcatraz penitentiary. de Smet said he was shocked to discover that the historical structures were maintained in such good condition.

“I was surprised for several reasons,” said de Smet. “The remains of these historical archaeology features were just a few centimeters beneath the surface and they were miraculously and impeccably preserved. The concrete veneer of the Recreation Yard floor is incredibly thin and, in fact, in places sitting directly atop the architecture from the 1860s. We also learned that some of the earthwork traverses were covered over with thin concrete layers through time, likely to decrease erosion on the rainy windy island. It was wonderful to find the history just beneath our feet that we can visualize for the public.”

Alcatraz Island is best known as a former high-security federal penitentiary that once housed many of America’s most notorious gangsters and criminals. Today, it is a National Historic Landmark that attracts several tourists in its location adjacent to the Golden Gate Bridge in scenic San Francisco Bay. While people flock to the island for its reputation as America’s strongest prison, many overlook Alcatraz’s former military role as a 19th century coastal fortification. The fortification, featuring underground ammunition, is important from a military history perspective as it marks the transition to earthen structures from the traditional brick and masonry constructions that characterized earlier 19th century coastal defenses.

Since Alcatraz had been converted to a prison after its military debut, researchers were interested to see if there were any historical remains left of the fortification.

“During the construction of the now-infamous Alcatraz prison in the early 1900s, there was only one regulation and protection of cultural heritage in the US: the American Antiquities Act of 1906. And even so, Alcatraz would not have been considered under it, as it was so young and seemingly insignificant,” said de Smet. “As such, the area was essentially bulldozed from the former military installation to the modern prison we see today. In converting the area to a prison, the vast majority of the previous military history of the island had been erased, but we wondered if perhaps something of that significant time in both the islands and American history remained, but buried and preserved beneath the subsurface. As such, we sought non-invasive, non-destructive means to ascertain if any historic archaeological remains lay beneath several parts of the island, like the Recreation Yard of the infamous US Federal penitentiary. We did not know what to expect. We did not know if there would be any extant subsurface architecture of these historically significant remains, or if there was anything left, what their extent and integrity would be like.”

The noninvasive process used by researchers permits accurate spatial identification of these and other 19th-century architectural structures depicted in historical documents. With this new breakthrough, the approach can be applied to subsurface investigations at other important cultural landmarks worldwide. de Smet said the results prove that archaeologists can detect historical structures in a gentler manner.

“With modern remote sensing methods like these, we can answer fundamental archaeological research questions about human behavior, social organization and cultural change through time without costly and destructive excavation, thereby preserving these non-renewable archaeological resources in the ground - or in situ as we say in the field - for future generations,” he said. “These results are significant in that they show how modern technology can be used to answer fundamental questions of archaeological importance without any destructive excavations. This research shows that best practice approaches can be used to non-invasively non-destructively investigate the archaeological record with remote sensing alone.”

de Smet hopes to conduct further research on the topic and is currently preparing a manuscript for submission to the Journal of Cultural Heritage on terrestrial laser scans and ground-penetrating radar from the remnants of the former Citadel beneath the prison.

The paper, “The fate of the historic fortifications at Alcatraz island based on terrestrial laser scans and ground-penetrating radar interpretations from the recreation yard,” was published in Near Surface Geophysics.