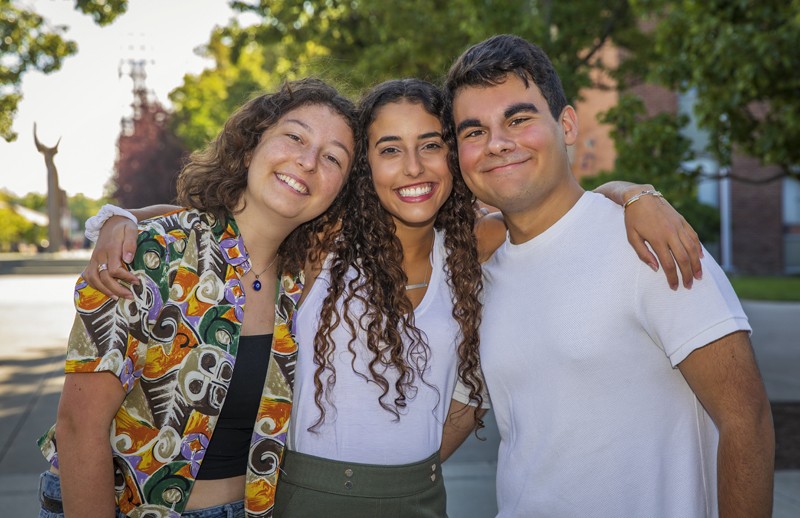 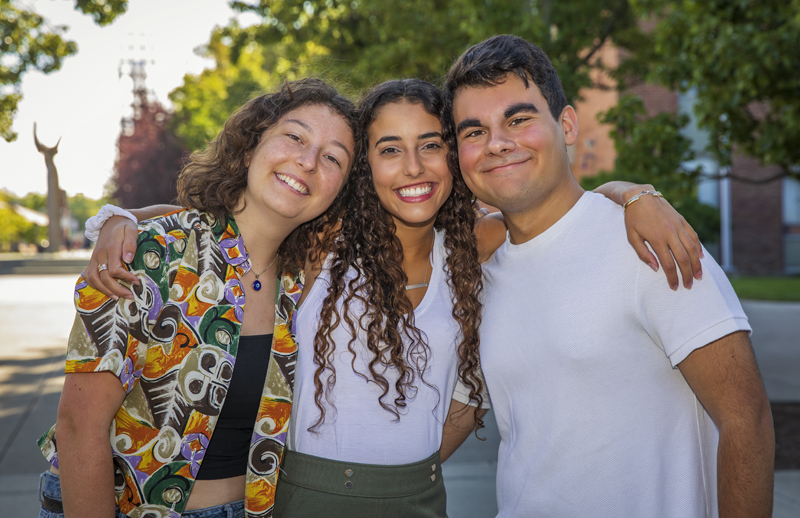 Three Harpur College students were able to make a “real-world impact” during their summer pre-law internship by helping refugees in Great Britain seeking to reunite with their family members.

“You often think about how privileged you are compared to someone who has to flee their country,” said Rachel DiSibio, a philosophy, politics and law (PPL) major. “But when you are face to face with refugees and they are pouring out their story about fleeing a political prison or being victims of sexual violence, nothing matches that experience.”

DiSibio, Lizzie Nutig and Daniel Singh Guzman spent six weeks at Sheffield Hallam University, one of the largest schools in the United Kingdom. The three worked with the university’s Refugee Family Reunification Clinic, conducting casework for refugees from countries such as Ethiopia, Eritrea, Yemen, Nigeria, Togo, Syria, Cameroon and Kuwait.

The internship, which marked the first international placement by the Harpur Law Council Pre-Law Public Interest Internship Program, was offered through a partnership between the Harpur Law Council and Binghamton University’s Human Rights Institute. The institute has a connection with the Helena Kennedy Centre for International Justice at Sheffield Hallam, as the institute and centre are planning an April 2020 international conference at Binghamton University on women, peace and security.

“Working at the clinic gave students first-hand experience with one of the most pressing human rights crises of our time: the challenges faced by those fleeing persecution or ruin in their home countries who have gained asylum in Britain, but whose families have not been resettled there,” said Alexandra Moore, co-director of the Human Rights Institute. “Our students were outstanding at using their intellect and their compassion in working with clients who very much need assistance, but not pity.”

“Students like those here at Binghamton University remain committed to using their education and skills to sustain efforts and create prospects for a brighter future for hundreds of millions of people around the world,” he said.

For the students, the first day at Sheffield Hallam was memorable.

“It was amazing because they threw us right in,” said DiSibio, a senior from Bethpage, N.Y. “When you get a (law) internship at this age, you are filing paperwork or typing up a legal brief. At Sheffield Hallam, it was apparent from the first day that we would be doing actual casework.”

“I hoped it wasn’t going to be like (the movie) ‘The Devil Wears Prada,’ and I’m running around, making coffee and fearing for my life!” Singh Guzman said. “But that wasn’t the case.”

The students’ responsibilities ranged from interviewing refugees to gathering evidence such as birth and marriage certificates, photos and other documentation to filling out visa forms for family members. The students then wrote reports to the British government about the refugees and the family members who were seeking reunification.

“It was empowering work,” said Nutig, a junior PPL major from Tarrytown, N.Y. “When I got to England, I thought: ‘OK, I’m interested in helping refugees.’ But I didn’t know I’d play such a major role in (the process).”

Sheffield Hallam was on summer break, so the Binghamton trio were the only students helping refugees. They were supported, though, by a small team of solicitors who operate the clinic.

“We got to work with lawyers who have a lot of experience,” Nutig said. “They taught us about British law and what it means to be a refugee and have asylum status.”

While the internship experience proved invaluable, the students admitted that there were challenges — particularly on the emotional side.

“Clients come in and tell heart-wrenching stories about how they were separated from their families and how family members were killed,” Singh Guzman said. “You had to sit there and take notes. You could not break down in tears with them. ... You have to give of yourself mentally and emotionally.”

DiSibio recalled learning that a refugee would be unable to reunite with an adopted child.

“I’m not ashamed to say that there were times I went home and let it all out,” she said. “I cried because there was a child who couldn’t come. There’s a family suffering in a refugee camp that you can’t help at that moment.”

“We were encouraged to talk openly about the challenges in our work,” said Nutig, who added that they also produced weekly reports to Moore.

The students also admitted that they felt uneasy returning to Binghamton knowing that their cases were unresolved. The refugee reunification process usually takes more than three months, Nutig said.

“It was a shock to me,” DiSibio said of the fall semester. “I’ve always loved school. I’m a senior. I’m applying to law school. Coming back was the first time I wasn’t excited about sitting in a classroom and absorbing knowledge. I was using knowledge and doing something (at Sheffield Hallam).”

Singh Guzman, who has lived in Spain with his family and worked with the Red Cross there, compared his feelings to returning to Binghamton University after being in Barcelona during the August 2017 terror attacks.

“How am I at (Binghamton) when there are people suffering?” he recalled saying to himself at the time. “I should be back there helping out.”

Moore praised the trio for making a direct, positive impact on the world’s refugee crisis and said she expects Sheffield Hallam to welcome more Binghamton University students in the future.

“I think the students were terrific,” she said. “This position calls for a great deal of maturity, self-reflection and passion for justice. I could tell the students were completely engaged in their work by reading their weekly reports, but more importantly, their supervisors at Sheffield Hallam University were deeply impressed by our students and their commitment to the project.”

The summer also solidified the students’ hopes of pursuing careers in law or international service.

“I’m now passionate about refugee rights,” said Nutig, who is also a Harpur Edge student associate and a team leader in the Center for Civic Engagement’s political-action program. “I’d love to use this experience to volunteer at a refugee organization. I know there are plenty in the U.S.”

DiSibio, who spent part of her time at Sheffield Hallam working on the Justice for Her project as a Binghamton University Kaschak Grant recipient, said something as simple as a hug from a client was meaningful.

“My first client was illiterate,” she recalled. “If this client’s children can come (to Great Britain), they would have the opportunity to be the first literate people in the family. You are helping to change the course of people’s lives and futures.”

Singh Guzman, who also speaks Spanish, Italian and French, hopes to get a job after graduation working with a nonprofit or nongovernmental organization in Europe.

“I’ve seen and experienced so much,” he said. “I can’t complain now that my coffee is too cold or the blinds aren’t sufficient enough to block out the light in the morning. People are fighting to live and see their (families).

“We have so much to give as First World citizens. I think it’s our duty to give as much as we can to people in need of help.”