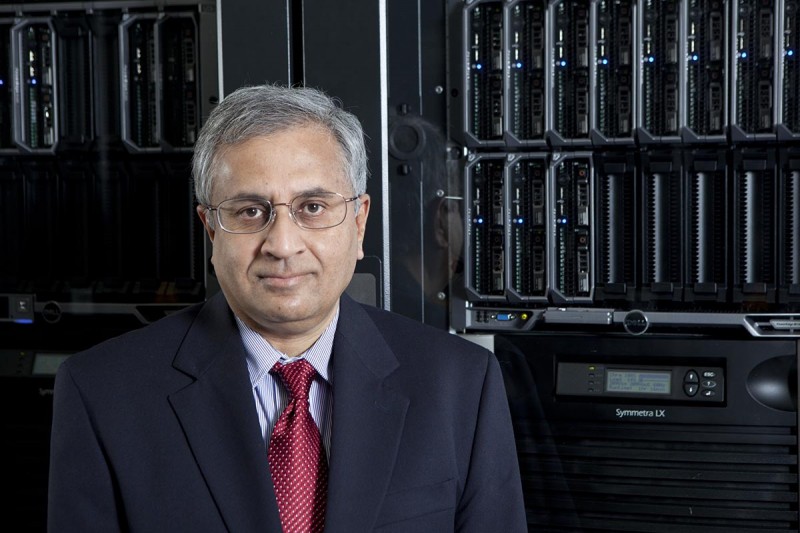 Binghamton University now has another distinguished professor among its ranks.

Kanad Ghose, who has been a faculty member for the Department of Computer Science at the Thomas J. Watson School of Engineering and Applied Science for more than 30 years, received the honor late last week from the State University of New York.

Promotion to distinguished professor is the highest faculty rank that SUNY awards, and it is reserved for those who have achieved national or international prominence and an exemplary reputation within their discipline.

Ghose has been hailed as an internationally recognized academician and a thought leader in key technology areas, including energy-aware computing and architectures, systems security and sensors for monitoring human biometric parameters. He holds 25 patents that improve technology in each of these areas, and he has established startup companies in the realm of energy-efficient computing.

In addition to his numerous scholarly publications, Ghose has received millions of dollars in research awards from federal, New York state and industrial sources. He also served as chair of Binghamton’s computer science department for more than 17 years.

He co-founded and serves as the Binghamton University site director for the Center for Energy-Smart Electronic Systems, an National Science Foundation Industry-University Cooperative Research Center (I/UCRC) shared among five universities and 22 industry partners.

Colleagues from outside Binghamton University offered letters of support for Kanad Ghose’s elevation to SUNY distinguished professor. Here are just a few quotes.

“I would rank Dr. Ghose in the top 5% computer architecture researchers worldwide in terms of his technical achievements and contributions. His leadership is well recognized by his peers.”

“Professor Ghose has made important contributions to the field of computer architecture where he has shown a very high degree of originality. He has also achieved national prominence as a leader for large research centers, an entrepreneur and inventor, and has been an effective educator at the undergraduate and graduate levels. He has also provided outstanding service to his department. His leadership across a wide range of endeavors is truly remarkable.”

“Professor Ghose has clearly demonstrated that he is a first-class researcher with outstanding creativity and excellent abilities to lead and perform research projects of extremely high relevance and impact.”

“I have always been impressed by the high quality of his research. He has attacked important problems, such as synchronization and interconnection network design, and produced significant, innovative, practical results, that have been designed and analyzed in a rigorous manner.”

“Professor Ghose has always represented the best values of this state’s public mission to its own people, and all peoples of the world,” he said.

“For the many times that he has conceived, imagined and pioneered ways to benefit society and improve lives through persistent attention to energy efficiency; for his diligent, rigorous research investigating thorny problems in need of innovative solutions; and for his transformative leadership, recognized and respected by a global community of colleagues in academia, students in the laboratory and industry leaders in the field, he is most worthy to be promoted to the rank of SUNY distinguished professor.”

Watson School Dean and Distinguished Professor Krishnaswami “Hari” Srihari added: “Professor Ghose is a researcher par excellence — famous in his field, tremendously successful in both publications and funding. As a leading academician, his work has drawn national and international attention, and he has helped to attract world-class scholars to our campus.”

Interviewed after the announcement, Ghose said he is grateful for the honor but added with a laugh, “I don’t feel any different at all. Business goes on!”

Ghose earned his bachelor and master of technology degrees in electronics engineering at the University of Calcutta, then his master of science and PhD in computer science at Iowa State University. He joined the Binghamton University faculty in 1987, where he secured research funding right from the start.

“IBM used to have a processor development lab in town, designing microprocessors and processing platforms. That was my specialization area at that time,” he said. “I used to know an IBM gentleman who said, ‘We’ll provide you with research funding from day 1.’

“I had offers from 15 other schools, because this was a pretty hot area of research, but at Binghamton I saw an opportunity to go and do something. I would not be a faceless name — I could make a mark.”

In the 1980s and ’90s, Ghose was an early champion of energy-efficient computing at a time when most researchers focused their attention on increased processing speed no matter the cost in energy use.

“I could see signs in industry and in academia that we would hit this energy wall that would limit everything with how we do business,” he said. “Being ‘green’ at that time was not fashionable. I had papers turned down from top-notch conferences with a little note that ‘this is not of primary interest to us.’ But things changed and people became more aware of what was going on.”

Ghose chaired the Computer Science Department from 1999 to 2016 while still continuing his research pursuits. During his tenure, he has mentored 21 computer science PhDs and numerous MS students who have gone on to prestigious industry jobs or successful industry jobs.

“This honor is really like a celebration of the accomplishments of my students,” he said. “Without them, I would not be where I am today. Plain and simple. I also have good colleagues. They have provided the environment where I can do things well.” 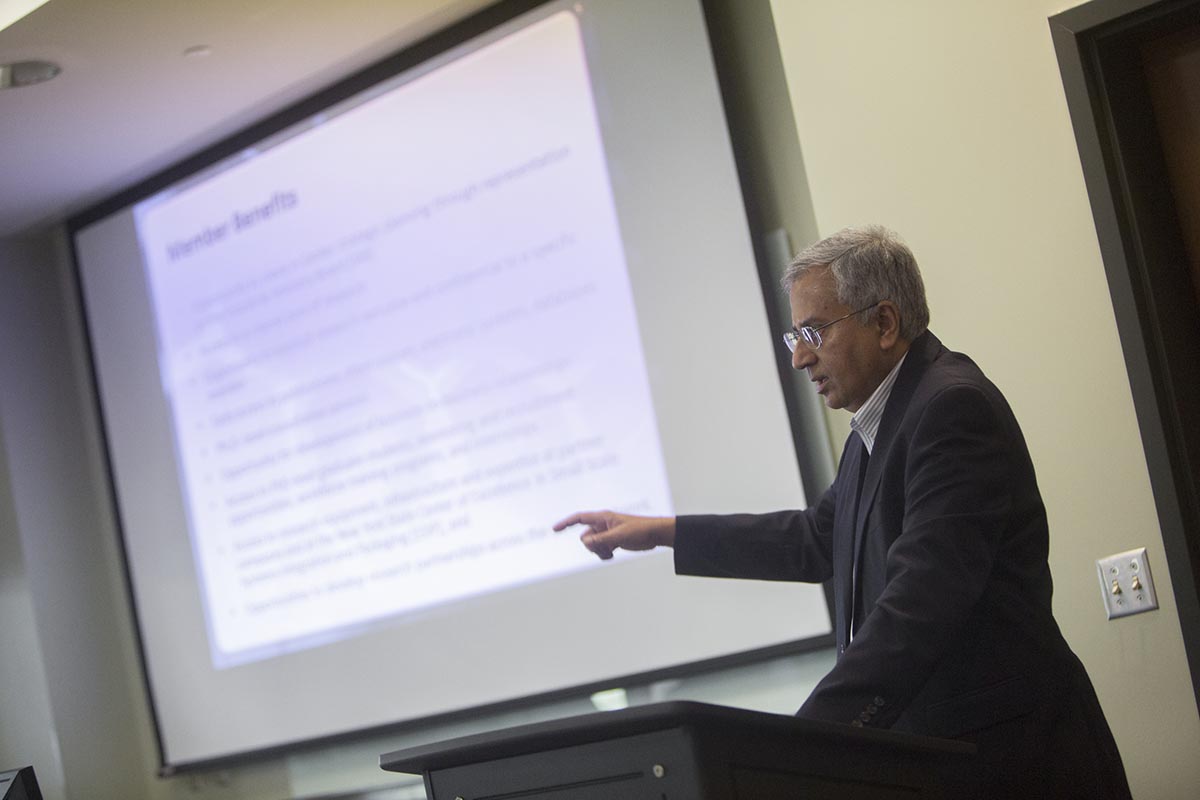 During his time in academia, Ghose has seen research become increasingly interdisciplinary to find the best solutions to perplexing technology problems.

“Ten years back, researchers would stay in their own silos,” he said. “Now, we are more willing to cross boundaries and join hands with those in other disciplines. I could do some of it myself because I’m an electrical engineer by training as well as a computer science PhD, so that made sense.”

As an example, he points to his own work with Distinguished Professor Bahgat Sammakia, who serves as Binghamton’s vice president of research and director of the Center for Small Scale Systems Integration and Packaging (S3IP). Together, they are exploring a holistic approach to data centers could result in millions of dollars of savings and a far smaller carbon footprint.

“I started to collaborate with Bahgat in the area of data center power management through really casual conversations in the hallways,” he said. “For seven years, we had polite discussions but didn’t really talk about technical things. That blossomed into a very successful partnership.

“Everything centers on the need to conserve energy or be energy efficient. Any problem that you see today, energy is the big constraint.”

While Ghose is humble about his many accomplishments over the past 30-plus years — “I call myself a ‘jack of all trades and a master of none’! And I’m proud to say that” — he also appreciates the opportunities he has earned through his proven record of research success.

“At this stage in my career, I can afford to take a chance that junior faculty can’t,” he said. “Many of these are high-risk projects that may not pay off, but I can offer to work on them because I am a tenured professor and I can take that risk. I also have a broad perspective on many things that wisdom brings with the white hairs over the years.”