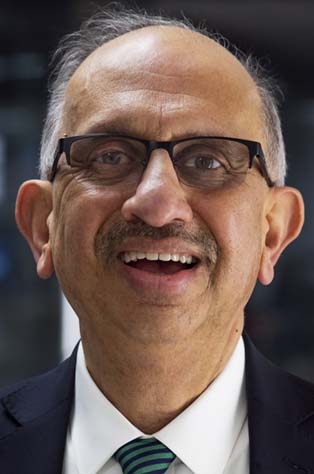 Distinguished Professor Krishnaswami “Hari” Srihari was appointed dean of the Thomas J. Watson School of Engineering and Applied Science at Binghamton University in June 2009. A prolific scientist, Srihari is known as an expert in many diverse aspects of electronics packaging and manufacturing. Over the past seventeen years, he has also pioneered research focused on the use of systems engineering principles in enhancing efficiency in health care delivery.

Srihari joined the faculty of the Watson School in 1988 where he served as chairman of the Department of Systems Science and Industrial Engineering.

He has played a key role in the creation of university-industry partnerships as director of the Watson Institute of Systems Excellence (WISE).

He has published over 475 technical papers in leading peer-reviewed journals and at conferences, and authored over 1,000 technical reports. Srihari has directed and graduated over 160 MS graduate students and over 40 students at the PhD level.

Srihari has secured over $40 million dollars in external sponsorship. Srihari earned the academic rank of distinguished professor. Granted only by SUNY trustees, it is the highest academic rank possible and is conferred on individuals who have achieved national or international prominence. Srihari was named an IIE Fellow in 2014. He has also been recognized with the Chancellor's Award for Excellence in Scholarship and Creative Activities, the University Award for Excellence in International Education, and APLU’s Michael P. Malone International Leadership Award.