Friend of the Earth: The Binghamton community remembers Dick Andrus 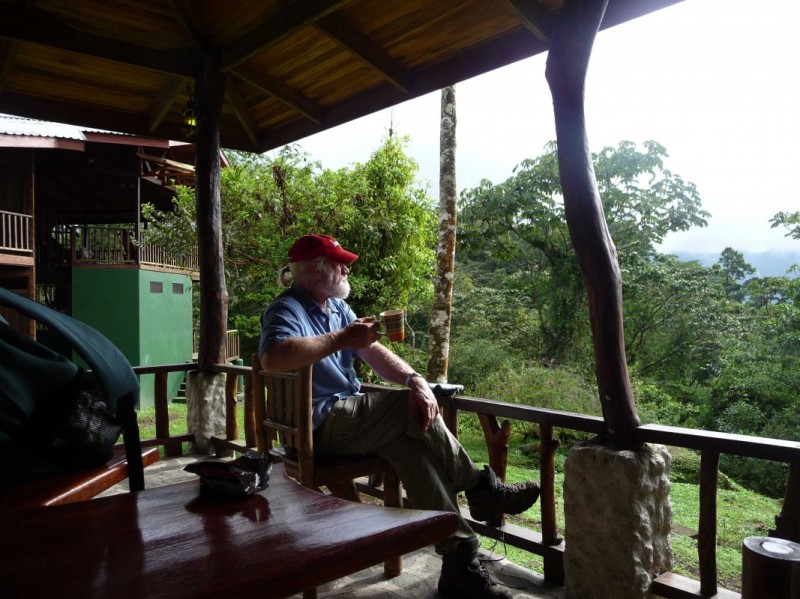 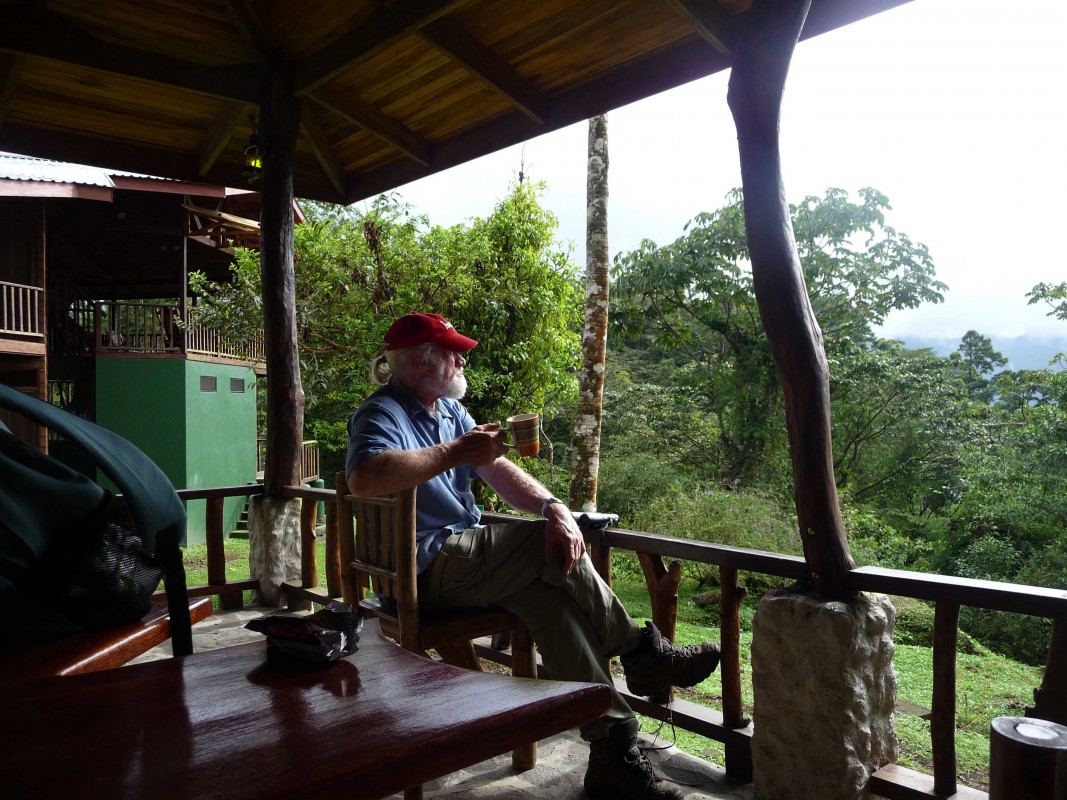 Richard “Dick” Andrus spoke for the trees — and the birds, the community gardens and the many varieties of sphagnum moss, which he described as “the most important plant in the world.”

A botanist by training, he came to Binghamton University in 1973 to establish its environmental studies program and changed the lives and paths of many students, planting the seeds of a more sustainable world.

Andrus earned his PhD in botany from the SUNY College of Environmental Science and Forestry and was a global expert in bog mosses, particularly sphagnum, which plays an important role in ecosystems and in fixing carbon. He was mainly a taxonomist, identifying and categorizing different species, and traveled the world to collect previously undescribed species of sphagnum; he ultimately donated his massive specimen collection to Duke University.

He helped shape Binghamton’s Nature Preserve, worked to protect the environment and encourage the local food movement in his own community, and was a devoted family man.

“He really lived the life he preached. In all the aspects of his life he considered and acted on environmentally sustainable ways of doing things,” said Associate Professor of Biological Sciences Julian Shepherd, who first met his colleague and friend in 1975.

Upon his retirement, Binghamton University established the Dick Andrus Field Ecology Research endowment, which ensures training for the next generation of environmental scientists and field ecologists.

Memorial gifts can be made to the Binghamton University Foundation, P.O. Box 6005, Binghamton, NY 13902, with “Andrus Field Research Program” written in the memo line.

Before they began their long association in the classroom, Andrus and Shepherd connected outside campus, quite literally: running trails through the countryside and exploring the natural environment. They paired up for a course on ornithology in 1979, which they then co-taught for nearly three decades.

In 1991, they took a trip to Costa Rica, where Andrus had intended to collect mosses; after his guide fell through, he invited Shepherd on the trip instead to study birds. Starting a few years later, the two co-taught a course on tropical ecology and conversation for 20 years that included a 10-day trip to the Central American country, known for its biodiversity.

One of Shepherd’s photos captures the essence of Andrus: sitting on the deck of Poco Sol, a research station in Costa Rica and one of his favorite birdwatching spots in the world, coffee in hand. It’s early — too early for the students, who are missing a treat: anywhere from 30 to 50 different species of bird, singing as a new day begins. In another photo, Andrus is surrounded by students at another favorite spot in Costa Rica — a bog filled with sphagnum moss, unusual for the tropics — wearing a purple t-shirt with the words “Sphagnum happens.”

Andrus preferred classrooms without walls, taking his students on frequent field trips and often to the campus Nature Preserve, where they learned about birds, forest and wetlands ecology, and other topics. Along the way, he would pick up a walking stick and use it to tap on standing dead trees, home to many animals, remembered Valerie Imbruce, an environmental studies alumna and director of the University’s External Scholarships and Undergraduate Research Center

He was looking for one species in particular: flying squirrels. Rarely seen due to their nocturnal habits, they seemed mythical to Imbruce and her classmates, but Andrus insisted on checking.

“And one day, he woke one up with his furious tapping and out came the flying squirrel!” she remembered. “Not only was that a magical moment, one that really confirmed my love of being in the woods, but it taught me about the persistence and patience it takes to observe nature.”

Andrus was extraordinarily effective in changing students’ outlook and the actions they took later in their lives, Shepherd pointed out. And belying his public reputation as a curmudgeon, he was a deeply caring individual often sought out by students for advice.

One of his protégés, Victor Lamoureaux, followed his footsteps as a biology professor and steward of the natural areas for SUNY Broome Community College.

At Andrus’s suggestion, Lamoureaux started the Friends of the Nature Preserve at the University, a group that still exists today. As a senior, he joined Andrus and Shepherd for the first Big Bird Days challenge, identifying as many bird species as they could on a single day —tallying 100, after hearing the distinctive call of the prairie warbler in a field above campus.

He went to Costa Rica with Andrus and Shepherd three times, later leading his own trips there as a professor. After he earned his doctorate — with Andrus as a member of his committee — the two stayed connected. They went birdwatching together, and Lamoureaux regularly consulted him about teaching.

“I learned trees, birds, many plants, environmental science and advocacy, and an overall philosophy about much of life and what I do as an educator from Dick,” he said.

Initially a student in the School of Management, Valerie Imbruce transferred to Harpur College and environmental studies after taking a course with Andrus in the fall of 1996. He introduced her to ideas about society that she had never encountered before as a native of suburban Long Island — not only about ecology itself, but how to make a difference in the place where you live.

When she was a senior, Andrus gave her the opportunity to join an unconventional study abroad program in a cloud forest preserve in the Ecuadorian Andes. Imbruce learned Spanish and began to study tropical botany, later leading to her doctoral studies at the New York Botanical Garden. She later became an economic botanist who studies food systems, and now develops innovative programs for undergraduates in the effort to pay her experiences forward.

“We need people like him in our society to temper the human drive to meet our needs above other species,” Imbruce said.

While the Nature Preserve predates Andrus’ arrival at Binghamton by three years, he and Shepherd were among those who shaped it into the place it is today, performing maintenance and organizing crews of students to work on trails and signs. In the 1990s, they contributed to the expansion of the preserve, which now totals 182 acres.

“They really took it upon themselves to take care of the Nature Preserve and natural areas for decades before I took on the job. I find evidence of work that they have done years ago, and I am amazed at how much they accomplished as volunteers,” said Dylan Horvath, steward of the natural areas.

In fact, Horvath’s position was facilitated by Andrus. The professor was instrumental in approaching local businessman and nature enthusiast Robert Schumann, whose donation sponsored the steward post and who later left the 75-acre Nuthatch Hollow to the University.

Andrus and Horvath enjoyed a 20-year friendship, dating back to the time when the latter was a graduate student and teaching assistant. They enjoyed long talks and worked alongside one another in the preserve, building boardwalks, spreading woodchips or conducting invasive species management with the help of volunteers. The bird habitats that Andrus and Shepherd created and maintained there have drawn more than 200 species of birds, many of them migratory, through the years.

And Andrus was tough, Horvath recalled: At the age of 70, he threw a 60-pound log over his shoulders and carried it a mile uphill to build a boardwalk, passing students who were attempting the same feat. He could build a boardwalk by himself faster than a team of five, and cut down the phragmites — an 8-foot-tall species of invasive grass — from the wetlands.

“He taught students to think differently, to look at issues from different perspectives,” Horvath reflected. “Caring about the environment is caring about people as well as the plants and the animals. It’s amazing how many people I meet in the community who were taught and inspired by him.”

Outside of the University, he was also instrumental in growing Broome County’s local food movement, particularly Volunteers Improving Neighborhood Environments (VINES), a local organization focused on community gardens, urban agriculture and community green spaces. He cleared trees and established a community garden across the street from his own house, and exposed local youngsters to the wonders of nature, taking them on educational walks through the woods via the Grow Binghamton Youth Program.

“He helped found VINES and the Corbett Ave Community Garden, spread his love and knowledge of gardening, and inspired a countless number of people to embrace sustainable agriculture,” said Amelia LoDolce, executive director for VINES. “Binghamton won’t be the same without him, but his legacy will live on for generations to come.”

Andrus also served on the board of the Northeast Organic Farming Association-NY organic farm certification program, worked with the City of Binghamton’s Shade Tree Commission and was involved in the Binghamton-El Charcon Sister Cities Project with his wife, Jane. A frequent face at the Binghamton Farmers’ market, he supported the area’s folk music scene as well, serving on the board of Six on the Square in Oxford.

And that’s leaving a lot out. Above all, he was a friend of the earth.

Like many environmentalists, Andrus sounded the alarm about the impact of overconsumption, population growth, climate and the destruction of natural habitats — a warning call that wasn’t always welcome. Last year, Imbruce asked him what inspired him to keep going. His answer: “The students do.”

“He channeled his energy to build a better world into the classroom, to develop the next generation of thinkers and of citizens of the world,” she said.