Dare to learn: Irem Ayan scores her goals in translation, research and more 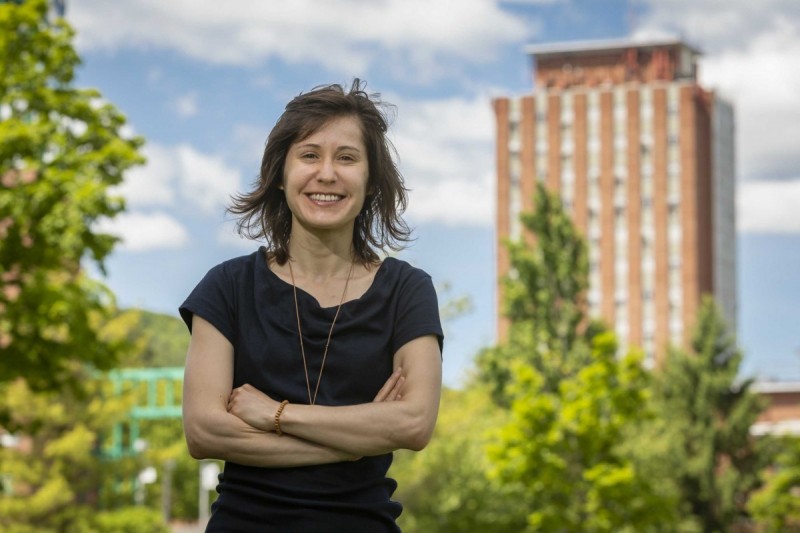 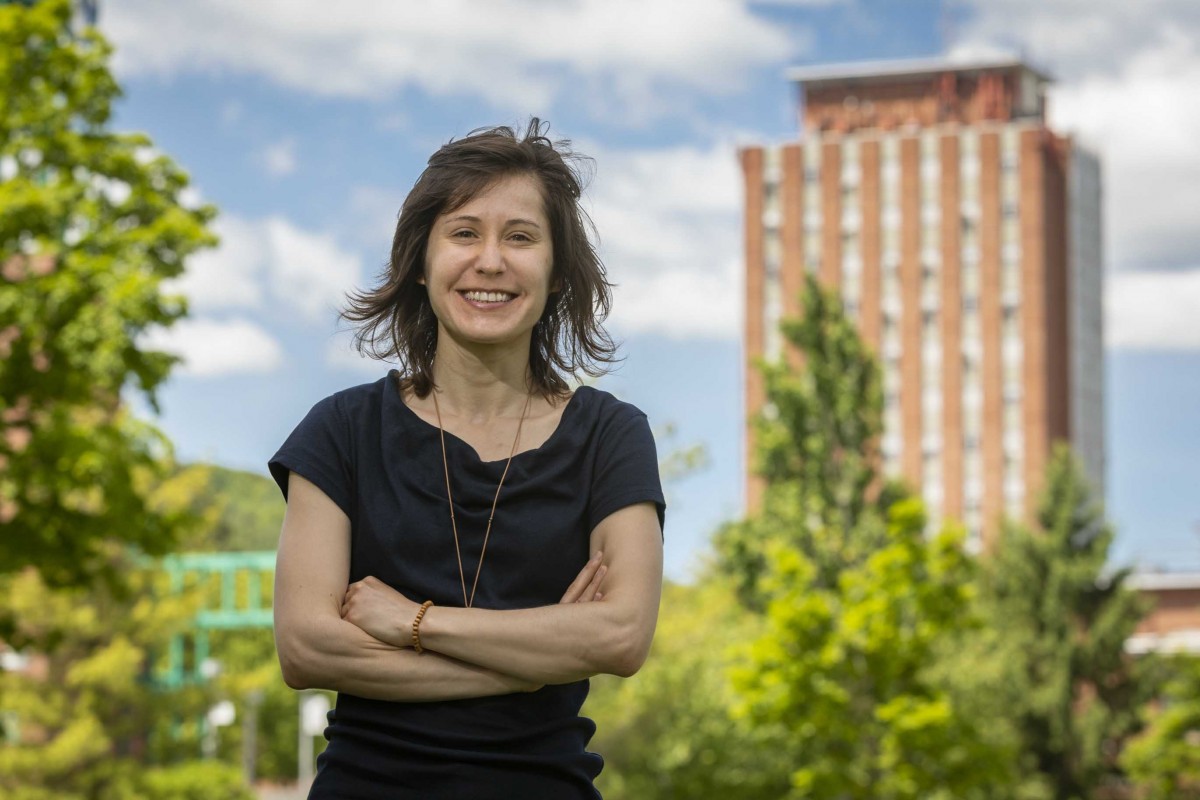 When you first approach a new language, you will make mistakes — many mistakes — as you begin to experience how these new words capture thoughts and ideas. But the best way to learn is to immerse yourself, to strap on the skates and step on the ice, both careful and bold.

Irem Ayan knows that well. She currently speaks “4.2 languages” — Turkish, English, French and Spanish fluently, and intermediate Chinese. Originally from Istanbul, she came to Binghamton University’s Translation, Research and Instruction Program (TRIP) as a Fulbright Scholar and earned her doctorate in translation studies in August 2019. Not many American universities offer doctorates in that field, she pointed out, and Binghamton’s PhD program was the first in the country.

She also, as it happens, knows a bit about ice skating. Just like learning a language, it quickly became evident that she needed to master the basics if she wanted to succeed. She found that out quickly when she accepted her roommate’s offer and attended her first hockey practice in college.

“I took my first step on the ice, grabbed the trainer as I fell and pulled him down with me,” she remembered. “Somehow, I said, ‘I want to do this.’ I fell in love and I took it very seriously.”

She hit the ice at 5 a.m. every morning before class, and then again for practice with the team in the afternoon. Her hard work paid off: She played for the first women’s national hockey team in Turkey in 2007 and competed in the 2008 World Championships and the 2008 European Women’s Champions Cup, scoring the very first Turkish goal in the latter tournament.

She has shown the same dedication both as an interpreter and in academia. Before she decided to pursue her graduate education, Ayan worked as an English, Turkish and French interpreter, and has since added Spanish to her repertoire, noted her advisor, TRIP and sociology Professor Joshua Price, who describes her as a committed scholar and thoughtful teacher.

“Dr. Ayan is exceptionally smart, engaging and thoughtful. She has great potential, given her scholarly and linguistic depth and refreshing intellectual curiosity,” he said.

Irem Ayan has loved foreign languages and cultures for as long as she can remember, but — as she reminders her students in her Binghamton classes — she had to start somewhere, too. English was her first foreign language, which she began learning in middle and high school. She studied French at Hacettepe University in Ankara where she also took elective classes in translation.

She initially considered studying sociology in China, but a favorite professor recommended that she consider a career in conference interpreting instead. He recommended a master’s program at Institut Libre Marie Haps in Brussels, a suggestion that Ayan ultimately followed.

It represented a new chapter in her life. While she was invited to join the national hockey team again in 2011, she opted instead for an interpreting internship at NATO. In these internship arrangements, the students interpret for real meetings but in a dummy booth with no microphone, often with their professor next to them, she explained.

After completing her master’s, she worked as a staff interpreter within the Foreign Relations Department of Istanbul Metropolitan Municipality, as well as a freelance translator and interpreter for the United Nations and the European Union. In addition to TRIP’s solid reputation, she was drawn to Binghamton by geography: The Southern Tier is a bus trip away from New York City and United Nations headquarters — a major draw for a translator.

Her doctoral dissertation — which she is now developing into a book — tackles the concept of emotional labor and sabotage in conference interpreting. Ethical norms require interpreters to impartially translate someone else’s words and voice, she explained. And these interpretations rely on a type of identification; when the speaker says “I,” the interpreter also says “I,” referring not to herself, but the speaker.

“Interpreters sell their voices for someone else’s benefit. Those thoughts and those words are not ours originally,” Ayan explained. “We have to recreate the same meaning and feeling in another language. That requires some emotional management. That, at times, requires interpreters to hide their feelings and thoughts and opinions.”

What happens, then, when the speaker says something that goes against the interpreter’s deepest held beliefs? Or when the translation calls for words that are lies, or tantamount to exploitation or harassment? Interpreters whom Ayan interviewed shared stories about how they dealt with the dark moments of discipline, including acts of sabotage, and Ayan also discussed her own experiences as an interpreter.

Sometimes, the subject matter is disturbing — for example, a courtroom reporter interpreting accounts of rape, domestic violence or torture. But even a simple business setting, such as conferences, can have its moments of alienation and tension, when interpreters are called to make problematic statements. It’s a topic that Ayan would like to see incorporated into training programs for interpreters.

“The training focuses on neutrality and impartiality. This issue needs to be incorporated into that training in depth and detail, since you can’t hire interpreters based on their ideology or gender,” she said.

In 2019, Ayan won the Distinguished Dissertation Award in the category of social sciences for her research, as well as the Graduate Student Excellence in Teaching Award that same year. Her “thorough and path-breaking research has given us an astonishing and original piece of scholarship in Translation and Interpretation Studies,” Price noted.

In TRIP, she learned a good deal from Price, whom she described as having “an extraordinary intelligence.” Another mentor — both professional and musical — is Associate Professor Dana Stewart, graduate director for the Department of Romance Languages.

Ayan plays bass in Stewart’s blues-rock jam band, Voodoo Highway. While it may seem counterintuitive, rocking out made Ayan a better graduate student by prompting her to organize her time more efficiently.

“I work on my dissertation, go to band practice and then a gig. It made me more disciplined,” she said.

Irem Ayan has been teaching French and Spanish at Binghamton since 2015, as well as courses in translation that she designed, including the craft of translation, notetaking for consecutive interpreting and Spanish financial, medical, film and theater translation. In addition to turning her dissertation into a book, she also hopes to obtain a tenure-track position, take a trip to China to improve her Chinese and, of course, learn a few other languages, too.

She reminds her students that she, too, was once a beginner in the languages she now speaks fluently, including English. Like ice-skating or bass playing, you have to start somewhere and put in the work, but she loves it.

“I love sharing my passions in foreign cultures and translation. I enjoy preparing my students for real-life situations,” she said.