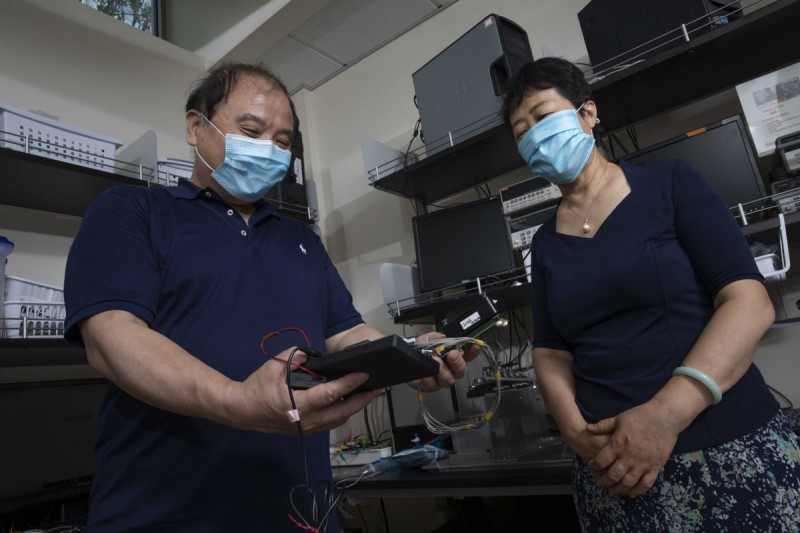 Lung cancer kills more people than any other cancer type because it sneaks in silently, often presenting few symptoms until the disease is too advanced to cure. Only 16% of lung cancer cases are diagnosed at any early stage and more than half of people who receive a diagnosis die within a year, according to the American Lung Association.

Those are statistics that Chemistry Professor Chuan-Jian “CJ” Zhong would like to change.

Zhong is an expert on sensors, super-small devices that can detect external molecules. He has worked in the sensor field for around 15 years, focused on a variety of uses, from detecting the chemicals in air pollution to health indicators. For the past six years, he and his research team have been working to develop a sensor that can detect the biomarkers from cancer from human breath. That could lead to an early screening tool in a medical setting — potentially saving lives.

“Typically, cancer is discovered at too late a stage,” Zhong says. “Early detection can lead to a higher survival rate.”

Clues in the breath

Human breath contains volatile organic compounds that provide clues to the inner workings of the body. For example, diabetic patients can release acetones in their breath, indicating high glucose levels and a potentially life-threatening condition called ketoacidosis. Other compounds are associated with conditions such as cancer.

“A sensor is basically a transducer that sends chemical information to something readable,” Zhong explains. 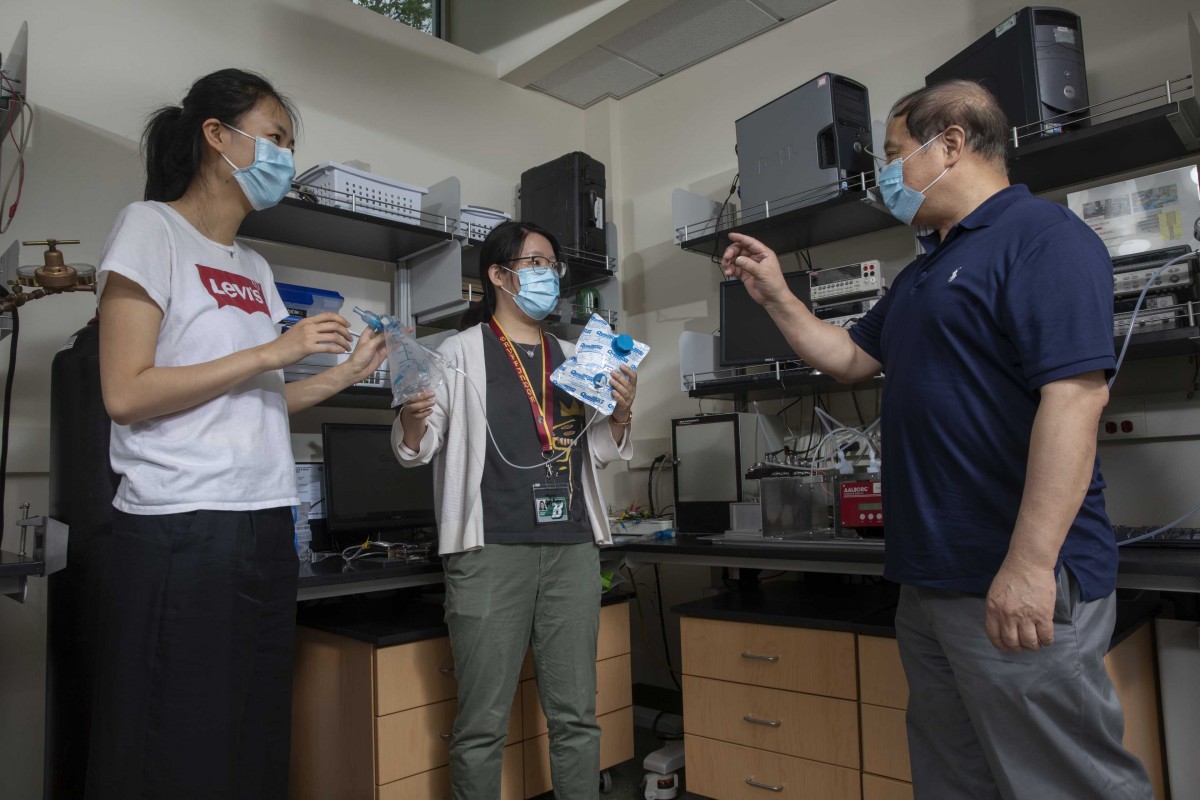 Graduate students Stacey Shan Wang and Sally Guojun Shang with Chuan-Jian Zhong, professor of chemistry, photographed at Zhong’s laboratory in the Smart Energy Building at the Innovative Technologies Complex. Image Credit: Jonathan Cohen.
The sensors are an example of nanotechnology that involve particles so small that they cannot be seen by the human eye. In fact, that’s the key to how they work: On the nanoscale, metal particles act like semiconductors, extremely sensitive to any change.

You can use sensors in a variety of ways, such as detecting biomarkers in a blood sample. Zhong’s cancer-detection prototype operates like a whistle: The patient blows into the device, sending the breath’s volatile compounds across the sensors. If the biomarker is detected, it creates an electrical signal that can be read on a portable handheld device.

In addition to the sensor, hardware and electronics, the system also requires a database of information that the system can read. On that end, Zhong’s research team is collaborating with Lu, an expert in database pattern recognition. Along with building a bank of information for the device to read, this part of the project involves using artificial intelligence to analyze the data.

“The human breath is very complex. It’s affected by age, whether you’re a smoker or not, your medical history; there are many aspects to it. That’s why we need a database to do the analysis,” Zhong explains. 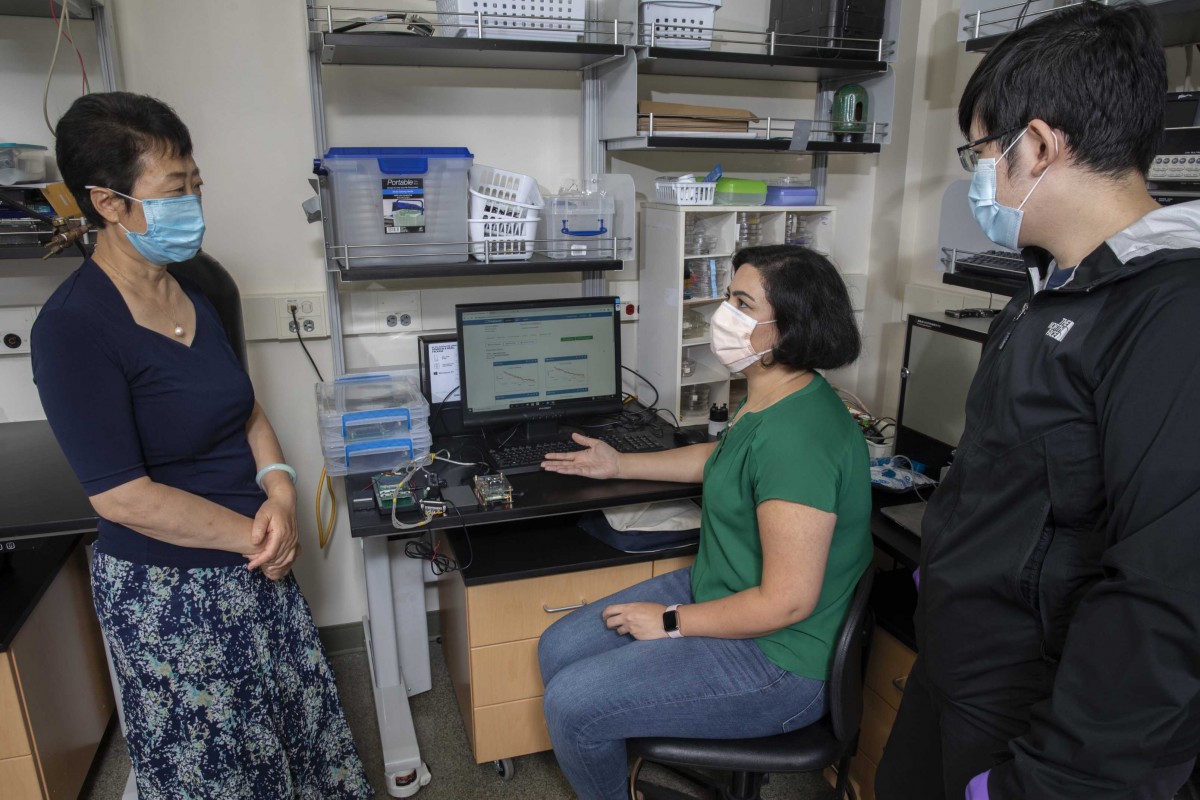 Susan Lu, professor of Systems Science and Industrial Engineering, with her graduate students, Dong Dinh and Behnaz Malaei, in Chuan-Jian Zhong’s laboratory in the Smart Energy Building at the Innovative Technologies Complex. Image Credit: Jonathan Cohen.
For its research, the team is currently using lab molecules that simulate human breath. A clinical research team at Broome Oncology LLC collaborated with the Binghamton University team and provided the project with data from limited cancer patients so that construction of the database could begin. A much larger pool of patients is needed to bring the project to fruition, however.

“The medical signal is complicated,” Zhong says. “Some patients may have an early stage, some a later stage, or they might be on different medications, but the database will allow us to analyze the data for cancer screening. We have the portable device; what’s missing is the data we can collect from patients. We hope to get more funding and expand this.”