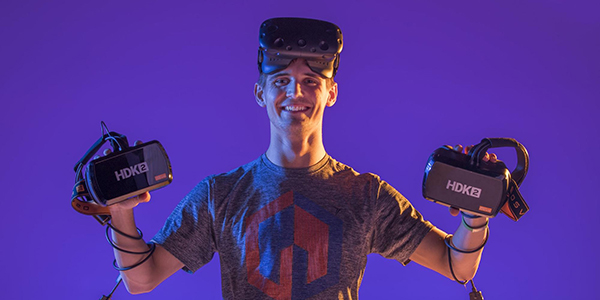 Matthew Gill ’18, MS ’19, was recently named the 2020 Technology Entrepreneur of the Year by the New York Small Business Development Center (NYSBDC) for his work developing virtual reality simulators for education experiences, such as those for school environments and for recruitment into trade disciplines.

Gill is the founder and lead developer of Enhance-VR, a small company headquartered in Binghamton University’s Koffman Southern Tier Incubator that creates content through virtual and augmented reality technology. The company originated from a HackBU skiing simulator project in 2015, and was officially launched in 2017, one year before Gill graduated from the Thomas J. Watson College of Engineering and Applied Science with his bachelor’s degree in electrical engineering. He earned his master’s in the same field in 2019.

“Essentially, Enhance-VR makes things virtual. We work with virtual reality technology and augmented reality technology,” Gill said. “We do work with companies for enterprise applications, whether it be for a trade show or virtual-reality training operations, that’s the kind of work that we do. We make fully immersive, 360-degree models, where you can interact with them.”

Since his first year at Binghamton, Gill has participated in hackathons that the University has held, giving him experience in the world of creating simulations. He began by making virtual-reality projects — one a race car simulator made with PVC pipe, duct tape, wood and bicycle parts in just 36 hours.

He also has received help from the University’s Office of Entrepreneurship and Innovation Partnerships, as well as the Small Business Development Center (SBDC) at Binghamton University. During Gill’s time at Binghamton, he was able to lay the foundation for his future career, both academically and professionally.

“Immediately, Binghamton made the connections for me to pursue entrepreneurship, which I didn’t even think was a possibility for me,” Gill said. “Through the entrepreneurship office and atmosphere at Binghamton, I was getting involved in that world constantly. And then the engineering program prepared me academically to understand the work that I now do.

“I do electrical work, like programming and 3D modeling. Through and through, Binghamton University, from the entrepreneurship office to the engineering school and the University as a whole, constantly provided the resources to me to be successful in what I wanted to do.”

Gill was nominated for Technology Entrepreneur of the Year recognition by Bob Griffin, a certified small business advisor at the Binghamton SBDC, who currently assists Gill with operational guidance, testing different business models and more.

“In terms of technology, Matt has been incredibly creative,” Griffin said. “He is very adaptable and amenable to change, and changing market conditions. We all believe that he is incredibly deserving of this award. I’ve always been impressed with him and the work he does.

“I think he is a classic entrepreneur in terms of his energy and optimism. His attitude set him apart when we were contemplating nominees,” Griffin added. “We felt that we needed to nominate him, and he is definitely a deserving award winner.”

Even though there was not a physical awards ceremony due to concerns over the coronavirus, Gill received his award on a Zoom call with the other winners from a variety of fields, such as childcare and restaurant businesses.

“It was so humbling and it was such an honor to receive this award from the NYSBDC,” Gill said. “During COVID, our business and a lot of others got quiet and we don’t have the same workload as before, so having this and receiving this award was such a breath of fresh air. It’s so amazing that people see what we do and like what we do. I’m thankful for all the support that I’ve been given.”