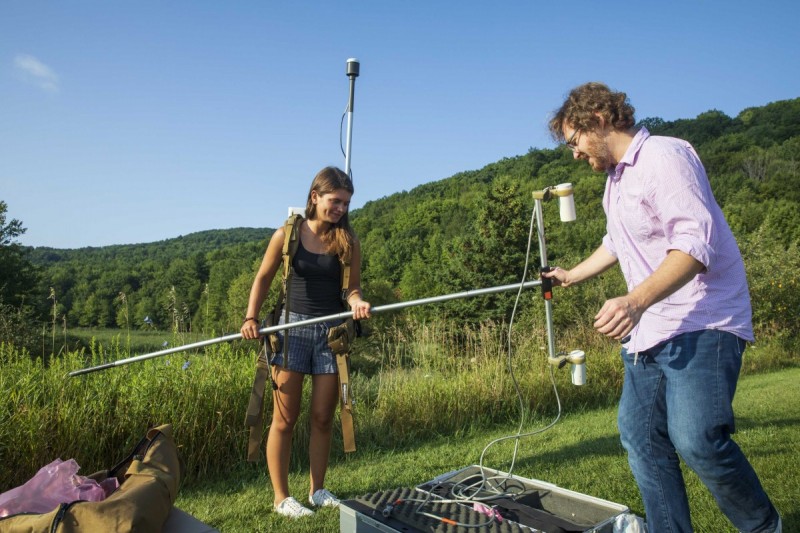 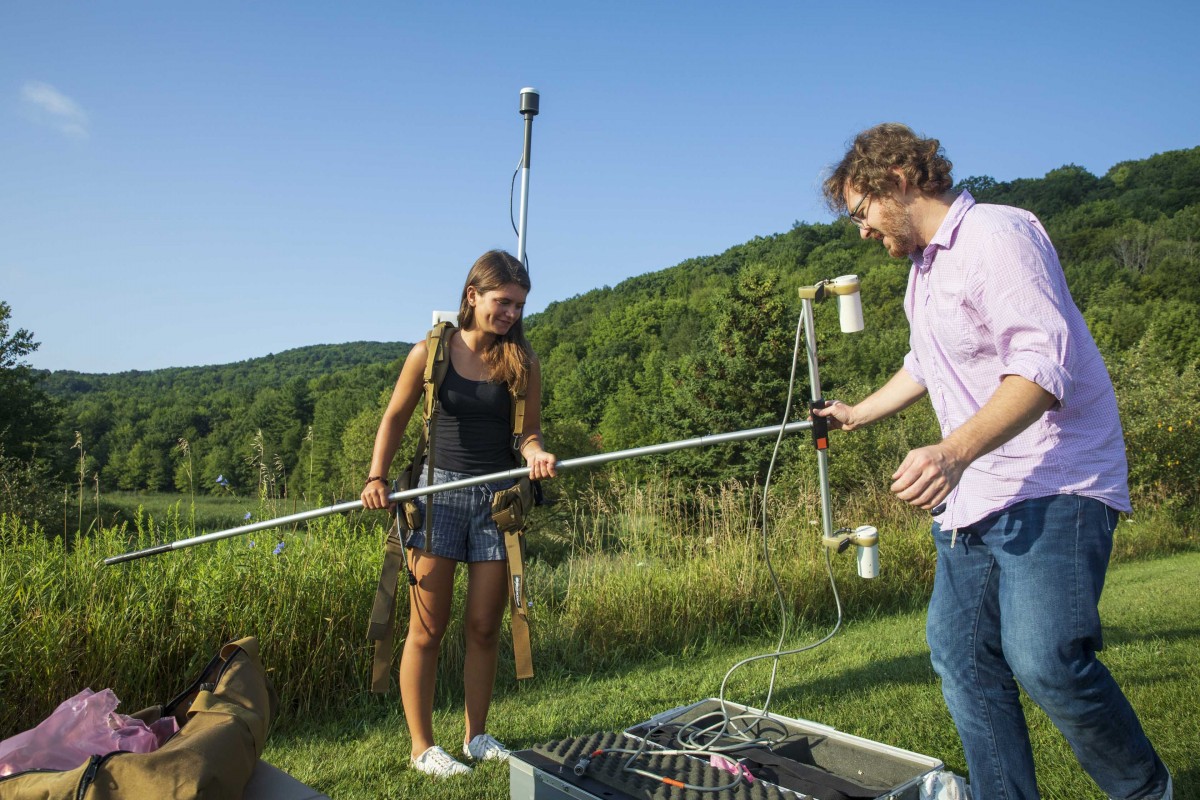 America’s first oil and gas rush began before the Civil War, with New York and Pennsylvania at the forefront. In 1821, the country’s first gas well was drilled in Fredonia. The first oil well came to Rushford in 1860.

As the wells went offline through the years, some were plugged with materials ranging from bowling balls to tree trunks. Others simply disappeared from view, their locations lost and overgrown.

Binghamton University geophysics researchers are at the forefront of a new way to locate these abandoned wells safely using drones, and recently published their findings in the Journal of Applied Geophysics. Co-authors of “Successful application of drone-based aeromagnetic surveys to locate legacy oil and gas wells in Cattaraugus County, New York” include Geophysics and Remote Sensing Laboratory Director Timothy de Smet, Assistant Professor of Geological Sciences and Environmental Studies Alex Nikulin and then-graduate student Natalia Romanzo, as well as Nathan Graber and Charles Dietrich from the New York State Department of Environmental Conservation (DEC) and Andrii Puliaiev of the drone company UMT.

New York State has an estimated 35,000 abandoned oil or gas wells, while Pennsylvania has more than 600,000 dating back to the early days of drilling. Overall, the United States has an estimated 2 million orphaned wells.

These wells pose multiple risks. They release methane into the atmosphere, a far more potent greenhouse gas than carbon dioxide, along with chemicals such as benzene, carbon tetrachloride and chloroform. Through sunlight-driven chemical reactions, methane also increases tropospheric ozone, which is considered a pollutant connected with respiratory distress.

“If all the orphaned and abandoned oil and gas wells in New York state were plugged, the equivalent of nearly 750,000 metric tons of carbon dioxide could be removed from the atmosphere, which is the equivalent of removing the cars of Buffalo for one year,” de Smet said.

There are economic reasons to plug gas wells, too; left uncapped, these wells make it difficult to re-stimulate older oil fields with newer technologies such as hydraulic fracturing, according to the article.

Plugging the wells is the right thing to do — but first you need to find them.

Send in the drone

In 1879, New York state became the second state in the country to require plugging wells after their useful life has ended. But that plugging requirement was poorly enforced until modern regulations came to the state in 1963, and what constituted “plugging” in those early days was crude by modern standards.

The greatest concentration of unplugged wells lies in the western part of the state, especially near the border with Pennsylvania and in southwestern counties such as Cattaraugus. Currently, state Department of Conversation staff must go out on foot to identify and plug these wells, an incredibly slow and inefficient process for even a small area.

Long before the invention of satellites and global positioning systems (GPS), locations were recorded on crude hand-drawn maps, which are often inaccurate, de Smet said. Sometimes these maps under-report well sites, or record wells that ended up never being drilled. That is, where the maps exist at all.

To find abandoned wells, researchers outfitted a drone with a magnetometer that can detect magnetic anomalies in the wells’ metal casings, pinpointing their location.

But before the technology could be deployed in the larger field, they first needed to do multiple smaller test trials to ensure that the process works as intended. For example, every drone has a unique magnetic and electromagnetic interference signal that needs to be compensated for, de Smet explained.

Nikulin and de Smet have been testing the technology as a way to detect unexploded ordnance in Ukraine, and used advanced signal processing methods to determine the optimal parameters necessary to increase the signal-to-noise ratio. In previous experiments, they also tested flight elevations over the tree canopy.

They finally tried out the well-detecting drone at a Cattaraugus County site where 11 wells had previously been mapped on foot. It worked: In just over three hours, they located 72 wells.

“We could actually have flown the drone faster and for longer missions, but this was actually the first time we’d tested this, so we were pretty conservative with mission planning,” de Smet said.

Long-term, the DEC plans to adopt this strategy to locate abandoned wells, which the agency will then plug.

“Our method is pretty much the most reliable method to find them,” de Smet said.