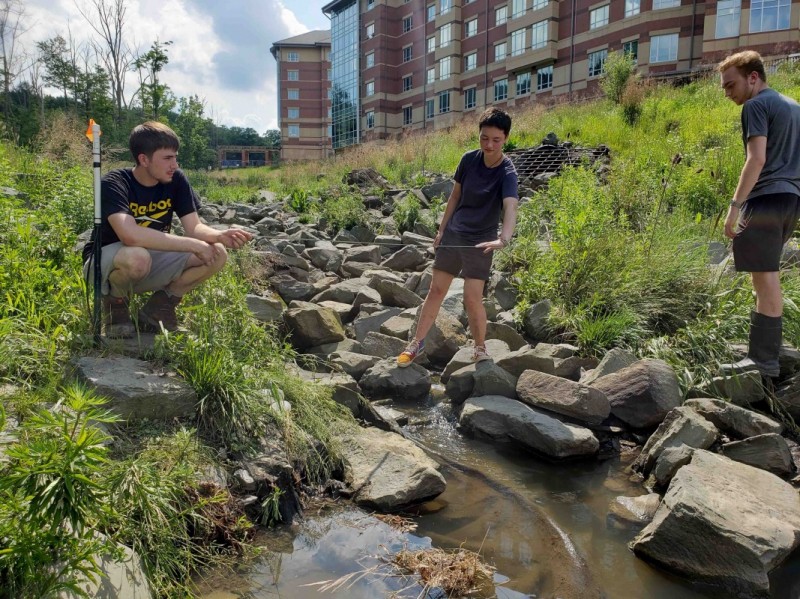 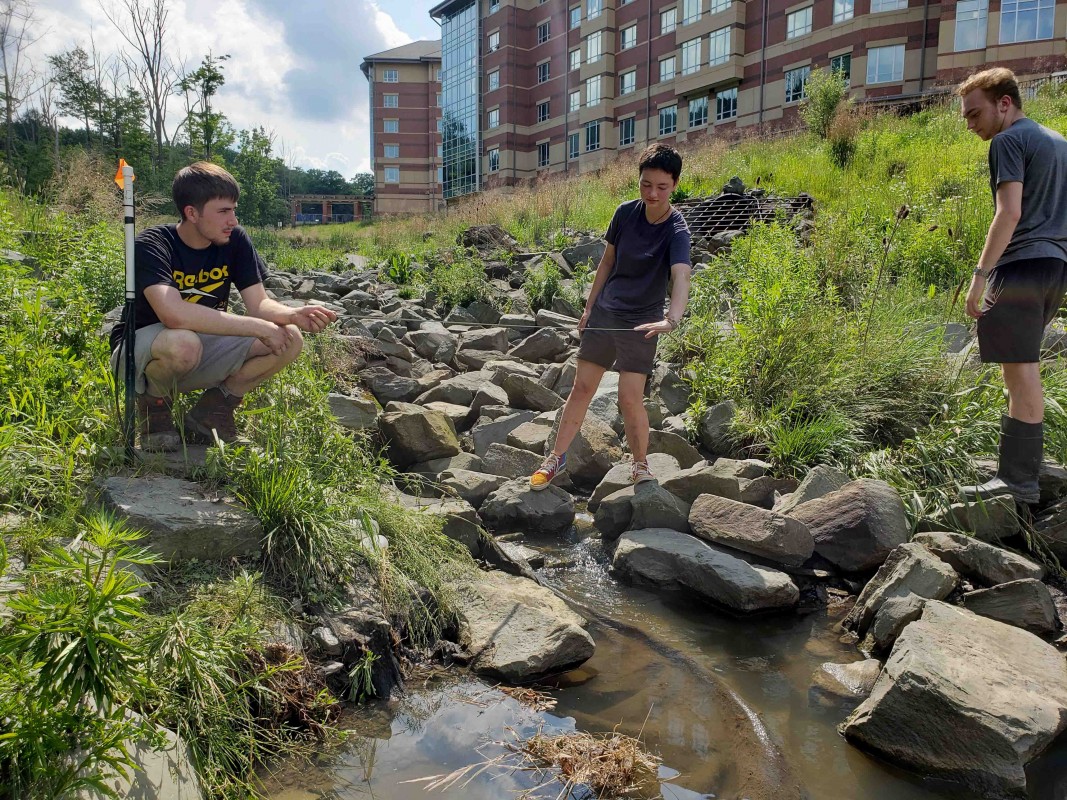 After a hard rain, water roars through roadside channels and culverts, often eroding the ground it touches with sheer force. The more paved surfaces in an area, the faster the flow and the deeper the problem.

It doesn’t have to be this way.

Wetlands provide a space for water to spread out, slow down and filter out contaminants, while providing needed habitat for wildlife. Students in the biogeochemistry track of the First-Year Research Immersion (FRI) program have had the opportunity to see this process firsthand.

Expanding the ecosystem of learning

During the course of the National Science Foundation’s Geopaths grant, Binghamton University hosted a trio of summertime wetland and watershed workshops for high school science teachers, drawing 22 teachers and 41 students from a dozen school districts in the region.

They learned about field experiences and activities that they could take back to their own classrooms to deepen their knowledge of the environment.

Five years ago, Professor of Geological Sciences and Environmental Studies Joseph Graney and his co-principal investigators received a $377,000 National Science Foundation (NSF) Geopaths Award to support the biogeochemistry program, the only NSF grant awarded in Binghamton’s history to an individual FRI stream. The grant has allowed students to work on research related to seasonal changes in water quality and quantity through field-based activities, an important skill set for both geoscientists and environmental scientists.

Of the 120 first-year students who completed the second semester in biogeochemistry, 95% have chosen to pursue majors within science, technology, engineering and math (STEM) fields, and 35% have chosen either geological sciences or environmental studies. The program has also helped increase gender diversity in STEM: 60% of the participants over the last five years were women, and today, 67% of environmental science and geosciences majors from this FRI track are female.

More than a third of participants have disseminated their research results at regional and national conferences by the end of their sophomore year. Thirty students also have received grant-sponsored summer research support, mostly in the biogeochemistry program, although students in other FRI streams have taken advantage of this opportunity.

“The grant helped to fund the participation of students at research conferences, and provided the ability to fund up to eight students each year to work on their research projects in the summer,” Graney said. “Students from other FRI tracks were often included in these summer research teams.”

Summertime projects have included restoration work on the Bartle wetlands, constructed in 2018 on a former grassy lot near the soccer and softball fields. The Committee for the University Environment advocated for the creation of the wetlands to capture storm water runoff from nearby parking lots, which travels through culvert systems under Bartle Drive; part of this runoff has now been diverted into the Bartle site.

“We knew about the plans for the wetlands when we wrote the grant, and always planned to include this site as a part of the FRI summer and year-round research activities,” Graney said.

FRI researchers and students in Graney’s environmental hydrology and environmental measurements classes use the site to study the physical, chemical and biological benefits derived from green infrastructure.

To that end, Graney installed a series of sensors that monitor the quality and quantity of the water as it enters and leaves the wetlands. This summer, the students were learning how to download and interpret that data, and also collected samples at the wetlands’ inlet and outlet to determine changes in the chemistry of the water samples. They will continue sampling in the fall to examine seasonal differences, he said.

Students also conduct research at Lake Lieberman near the residence halls and Nuthatch Hollow off Bunn Hill Road. This fall, they will be working on an erosion-control project near Nuthatch Hollow’s Living Building site, a collaboration between Binghamton University’s Center for Integrated Watershed Studies and the Upper Susquehanna Coalition (USC).

“It is a common practice to channel storm water into roadside ditches during storm events. Often this storm water is then channeled through culverts under the roads onto the adjacent property,” Graney explained.

At Nuthatch, the storm water has cut an erosion channel through the glacial till on its way to the large pond there. The USC wants to return the channel to its pre-erosion state, while creating more wetlands and small ponds along its path to increase habitat diversity.

The erosion problem in roadside ditches and culverts is extensive throughout the Southern Tier, Graney noted, and the project could prove an apt demonstration of ways to correct the problem in an environmentally friendly manner.

“The importance of green storm water infrastructure is of ongoing interest in all urban areas, and it is great that Binghamton has several locations where students can learn about these practices,” he said.