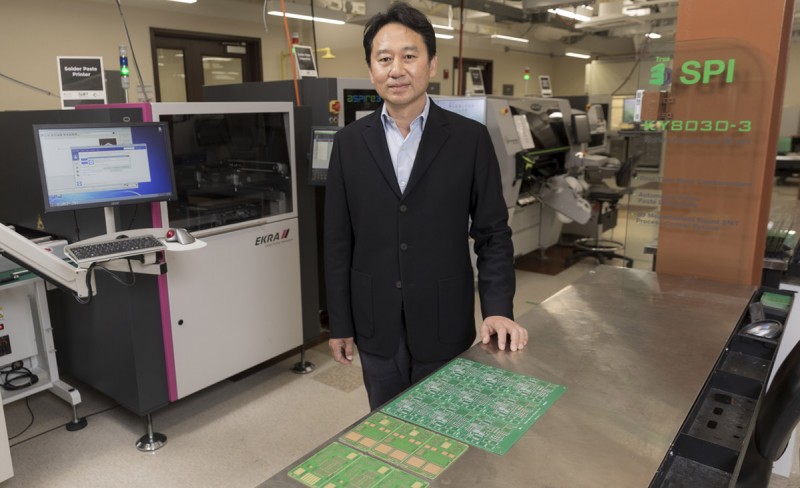 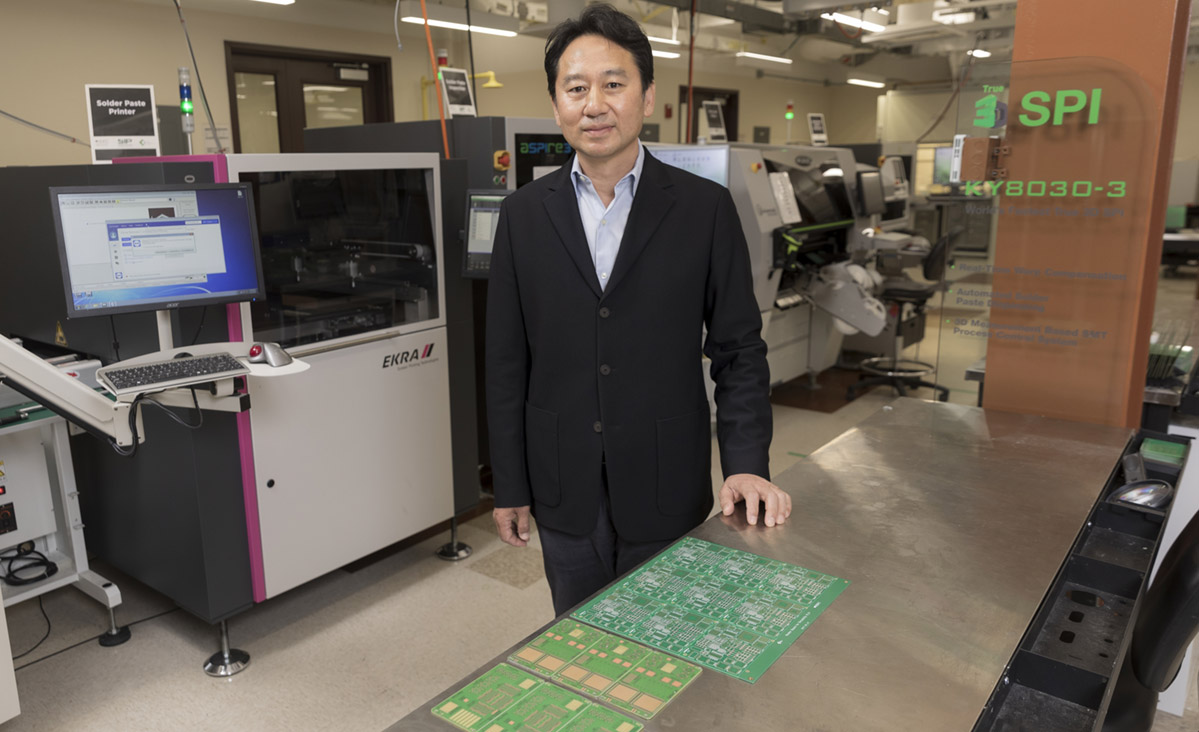 SB Park, professor of mechanical engineering at the Thomas J. Watson College of Engineering and Applied Science and the director of the Integrated Electronics Engineering Center (IEEC), was recently named a fellow of the American Society of Mechanical Engineers. Image Credit: Jonathan Cohen.
By Chris Kocher

Moore’s Law — packing twice as many transistors on the silicon every 18 months — has driven our technological revolution over the past 50 years. The processing power that once took entire buildings of computer banks now fits into the palm of your hand, giving smartphones access to all the knowledge of the internet.

In the past few years, though, as semiconductor manufacturers are making circuits measured in single nanometers, Moore’s Law appears to be coming to an end. (For scale, 1 nanometer is a billionth of a meter, smaller than a strand of human DNA.)

To accommodate consumer expectations for smaller and more powerful devices, researchers are increasingly looking to electronics packaging — a term that encompasses everything apart from the chips themselves. The field always has been important to ensure the proper functioning and longevity of devices, but now it is more critical than ever.

Professor SB Park — a faculty member in the Thomas J. Watson College of Engineering and Applied Science’s Department of Mechanical Engineering — has researched electronics packaging for nearly 30 years. As the director of Binghamton University’s Integrated Electronics Engineering Center (IEEC), he and his team have made key discoveries that improve how everyday devices work.

In appreciation for his groundbreaking research and contributions, the American Society of Mechanical Engineers (ASME) recently named Park a fellow of the organization, which includes more than 90,000 members in 135 countries worldwide. Only about 3% of members become fellows.

Park said he is honored by the recognition and hopes that it brings more attention to the research being done at Watson College.

“It is a meaningful recognition, and also a way of promoting my ideas and my University’s division to the wider world,” he said. “To be promoted to fellow, you have to proactively reach out to the technical communities by organizing conferences and symposiums, and by promoting a certain technology or bringing more attention to a certain field.”

Park earned his BS and MS from Seoul National University in his native Korea, and his PhD at Purdue University. Before coming to Binghamton in 2002, he worked on electronics packaging for seven years at IBM Corp.’s Microelectronics Division, but he originally had a very different career path in mind.

“When they approached me and offered the job as a packaging engineer, I knew what IBM was — but because I was an aerospace engineer, I didn’t have any clue why they would need me. Is IBM packaging chocolate cake or something?” he thought.

“In fact, they were doing something very similar, trying to protect electronics from drop shock and packing more into each device without ruining the electronics by the heat generated internally. I studied fracture and failure in aircraft, and they recognized that my background and expertise could effectively contribute to solving the problems they faced.”

Although he works in academia now, Park believes the experience and knowledge he acquired during his time in industry has been vital to the success of IEEC, his colleagues and students. Many others on his IEEC team have similar experiences working at tech firms.

“About 70% of my research group’s projects are associated with industry, and we have weekly meetings with the sponsoring companies,” he said. “All of my graduate students are directly connected with industry on a weekly basis. It is not just theoretical engineering — it is real engineering as they work toward their dissertations. They know the industry languages and what the ‘hot topics’ are at their companies, which could be their future employers.”

To explain the challenges that electronics packaging faces, Park makes an analogy to an automobile: When you build a car with a powerful engine, such as a 500-horsepower engine, you need stronger axles to handle that strain, a top-notch steering system that keeps you on the road and excellent brakes that will stop the car before a collision. Similarly, as silicon chips get smaller and powerful, the accessories that help it to maintain its level of performance must also shrink and be resilient.

Much like an urban area with a growing population occupying a finite amount of space, one way to make everything fit is to start thinking three-dimensionally, but stacking components faces one big problem: How to dissipate the heat buildup?

“Heat is the biggest threat for any electronics,” Park said. “When creating a three-dimensional design, how do we take the heat out? For the topmost component, we can use conventional methods, but what about the middle ones? It’s going to be well cooked in the middle!”

Finding solutions for future generations of electronics is a daunting mandate to fulfill, but Park is always looking ahead and eager for what comes next.

“Every day, the research is fun, and that is making me busy with joy,” he said. “I’m really grateful to be having this opportunity in my life.”