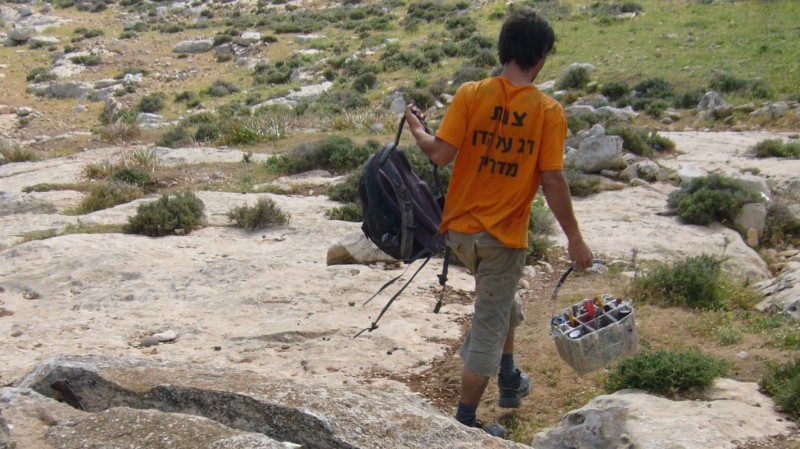 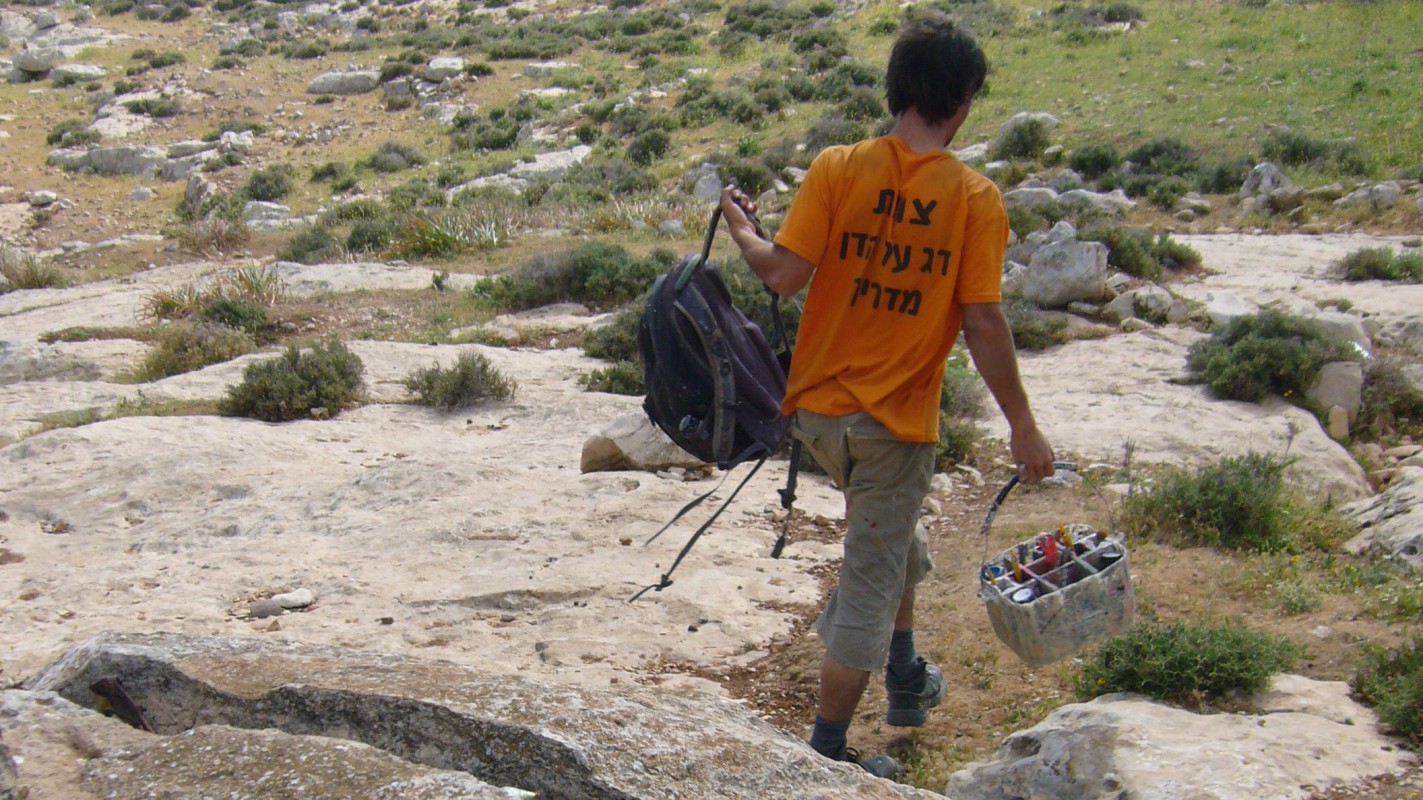 An Israeli waymarking crew member walks down a hiking path after he just painted a blue blaze on a rock. Image Credit: provided photo.
By Jennifer Micale

Pandemic aside, millions of tourists typically head to Israel each year. But almost all of them fail to find one of the Holy Land’s hidden wonders: a network of hiking trails that threads across a dazzling variety of landscapes, rivaling the great trail systems of Europe.

Approximately 6,000 miles of hiking trails lace a country the size of Massachusetts, spanning deserts and coastlines, farm fields and forests. Until very recently, all the maps, guidebooks and almost all the websites were solely in Hebrew, which deterred widespread international interest.

“Israelis love their country and these trails are almost like a private space for them; they don’t think of them as a commodity for tourists to explore,” said Binghamton University Assistant Professor of Israel Studies Shay Rabineau.

The trail system is the topic of his new book, Walking the Land: A History of Israeli Hiking Trails, which will be published this year by Indiana University Press. The book explores the environmental relationship between the Israelis and their country, but also the trails’ intersection with national identity, territory, politics and the military. For Israelis, hitting the trails has a meaning beyond just a great hiking trip, he said.

Now associate director of the University’s Center for Israel Studies, Rabineau first discovered the trail system just after college, when he spent a few years leading Holy Land tour groups in the country.

“Even after having extensively traveled the country over a period of three years, I literally didn’t know that any of these trails existed,” he recounted.

He learned about the trails from Israeli friends after he asked them about good places to hike. In 2006, Rabineau took his brother and best friend to walk on the Israel National Trail, a 631-mile-long trek that runs from the Lebanese border at Dan in the north to Eilat, located on the southernmost tip of the country on the Red Sea.

The Israeli National Trail is that country’s equivalent of the Appalachian Trail, although it lacks the amenities — such as official campgrounds — of its older American counterpart. Hiking the National Trail is a rite of passage for Israelis after they finish their military service, Rabineau said.

Hikers often rely on an informal system of “trail angels” who volunteer their help in towns along the way. The key to accessing that hiking culture: knowing Hebrew.

Hiking and the state

Looking at the number of trails per square kilometer of land area, Israel’s system is on par with countries like Germany and Switzerland, considered the origins of the European hiking tradition. While trail-marking in those countries goes back 140 years, Israel built its system rapidly from the early 1960s through the late 1980s, in terrain far different from its European counterparts.

But its roots are decades older.

Before Israel’s establishment, the Zionist movement had been trying to build a quasi-state under British rule after the first World War. The population in what was then known as Palestine was about 90 percent Arab, although that was shifting as Jews emigrated from Europe.

They brought hiking with them as a popular pastime. It also proved a cheap and effective way to familiarize themselves with the landscape and begin asserting control over territory.

Before Israel became a state, it didn’t have the capacity to build an army — but it could build a cadre of elite hikers. Future members of the special forces, these young men and women knew the land intimately and used their hikes as clandestine reconnaissance missions starting in the 1930s.

Jewish hikers marked the first trail in the future national system in 1947, literally one week before war broke out between Jews and Arabs, which culminated in the creation of the state of Israel.

The trail-marking was intended to keep hikers safe while finding their way through the desert. Through the years, some hikers lost their lives after running out of water, falling off cliffs or in connection with weapons-training out in the desert. There was another reason, too.

“The other thought was that marking a path would also mark territory and make this a place where Jews were free to walk,” Rabineau said.

If one looks closely at the history of the 1948 war or the Six-Day War in 1967, almost all the Israeli military leaders came from these hiking and scouting clubs. The Israeli military uses hiking as a prime training tool until this day, doing long treks on the trails toting full equipment.

Rather than the scenic hills outside cities that draw families and picnickers, the trail system began in the frontier-area border zones. The first trails laced across the Judean Desert east of Jerusalem, where David hid from King Saul in Biblical times and Jewish rebels hid from Roman legions. Bedouin treasure-hunters searched for Dead Sea scrolls there, and hikers were hit by sniper fire in the 1960s.

“The Judean Desert is this space empires had always failed to control,” Rabineau said.

Over time, the network of trails spread inward, eventually penetrating the metropolitan areas of Jerusalem, Tel Aviv and Haifa. But amid the ongoing Israeli-Palestinian conflict, trails are still political and national phenomena, and they remain spaces where Israelis seek to answer existential questions about themselves and the Jewish state.

Rabineau thought back to his own experience on the trails, which exposed him to an Israel that few foreigners have the opportunity to experience.

“You spend a lot of time in the desert, but you also visit little villages and small towns. You sleep on soccer fields and the corner of people’s farms,” Rabineau said.