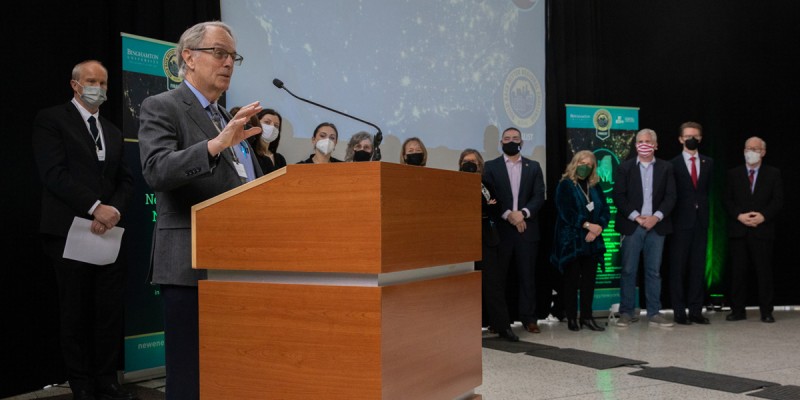 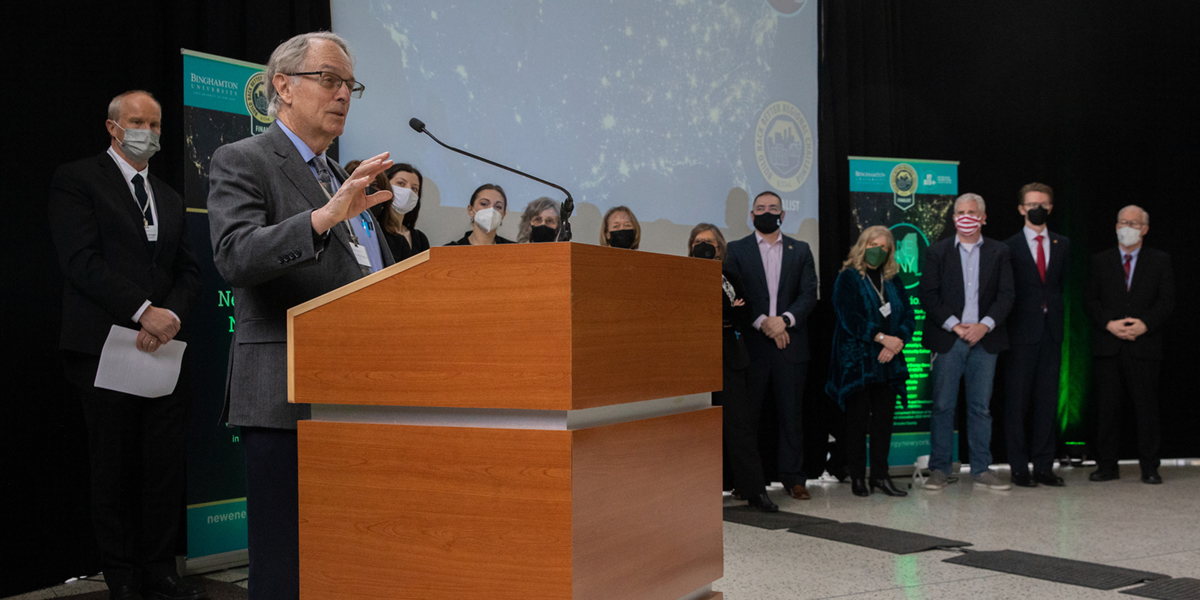 Distinguished Professor M. Stanley Whittingham, winner of the 2019 Nobel Prize in Chemistry for his role in the creation of lithium-ion batteries, spoke to a meeting of the New York New Energy (NENY) coalition on Thursday. Image Credit: Jonathan Cohen.
By Chris Kocher

Speaking to a room full of public officials and business leaders at Binghamton University on Thursday, Distinguished Professor M. Stanley Whittingham asked who had a lithium-ion battery on them at that moment.

Nearly everyone raised their hands. Our favorite portable gadgets — mobile phones, laptops, smart watches and more — rely on these batteries, not to mention electric cars and other larger devices. Whittingham knows that better than anyone — he won the 2019 Nobel Prize in Chemistry for his role in creating the now-ubiquitous power source.

Very few lithium-ion batteries are manufactured in the U.S., though, and that’s something that the New York New Energy (NENY) project is hoping to change.

The coalition, led by the University and the New York Battery and Energy Storage Technology Consortium (NY-BEST), hopes to establish a national hub for battery innovation, manufacturing and workforce development in upstate New York. NENY was selected as one of only 60 awardees in Phase 1 of the American Rescue Plan’s Build Back Better Regional Challenge. There were more than 500 Phase 1 applications. The University received $500,000 to develop a full proposal to compete for up to $100 million.

In addition to the economic benefits for the Binghamton region and the climate-change push away from fossil fuels, Whittingham pointed to the COVID-19 pandemic as another reason why the U.S. can’t rely on manufacturing sources in Asia or other parts of the world.

“We’ve seen what’s happened with COVID. Supply chains don’t work when they’re too global,” he said. “We have to get localized supply chains and make things for ourselves, not rely on others. The goal with New Energy New York is to make it here so we can say it’s made in America.”

Thursday’s meeting at Binghamton’s Innovative Technologies Complex invited dozens of local stakeholders for information sessions about NENY’s vision for battery production, which could provide thousands of new jobs in manufacturing, assembly and distribution. Also discussed were the current state of the battery industry and how the plan utilizes ideas about environmental justice and equity.

“This is a big deal,” said University President Harvey Stenger. “It’s an exciting and historic time for Binghamton University and for the Southern Tier, as well as the Finger Lakes region of upstate New York. Today’s convening of the New Energy New York coalition marks the next step toward making our region a national and international leader in the next generation of battery research, design, manufacturing and workforce development.”

Per Stromhaug, the University’s associate vice president for innovation and economic development, believes that NENY is “uniquely positioned” to lead the way in lithium-ion technology.

“The Southern Tier Regional Economic Development Council has defined energy storage as one of the potential growth areas for this region,” he said. “We have a battery gigafactory coming online later this year, right here in Broome County. We have resources and programs as educational partners in New York state, and we have a Nobel Prize winner.”

State Sen. Fred Akshar, R-52nd District, praised NENY’s focus on economic resurgence as well as the leadership of the University and Stenger in the Build Back Better Regional Challenge application, which is due March 15.

State Assemblywoman Donna Lupardo, D-123rd District, invoked Binghamton’s past achievements as the birthplace of IBM Corp. and encouraged the coalition partners to aid the next generation of innovation through lithium-ion batteries.

“New York State has established one of the most aggressive climate goals in the country, and a lot of people have expressed worry about how we’re going to achieve this without disrupting the quality of life that we’ve come to know,” she said. “It’s crucial that we communicate to the public that battery storage is one of the essential keys to a carbon-free power grid.”

Broome County Executive Jason Garnar — the government sponsor for the NENY project — appreciates the spirit of collaboration among all the stakeholders: “We didn’t use to do these types of things 15 years ago, but we do now. The potential for job growth here is almost limitless. We have the opportunity right here for thousands of people to work right here in Broome County. It’s hard for me to express in words how important this is to our community.”

NY-BEST Consortium Executive Director William Acker looked ahead to the greener future led by battery technology, which would affect everything from our vehicles to the power grid.