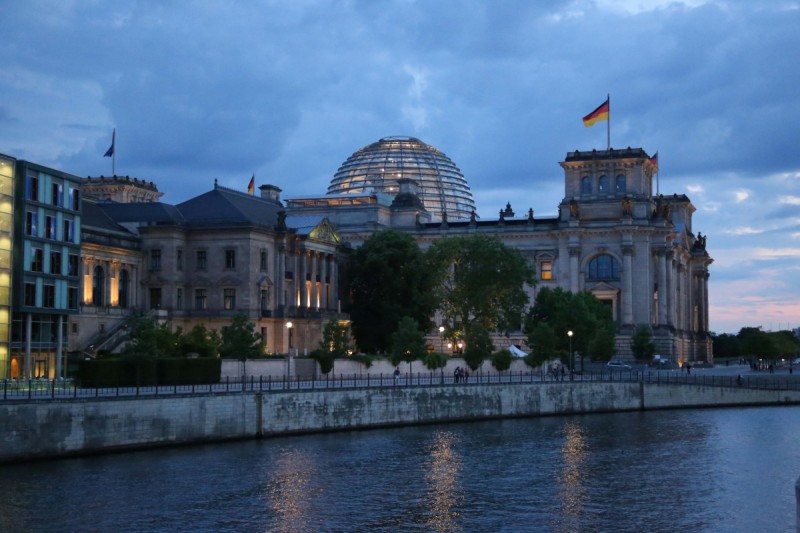 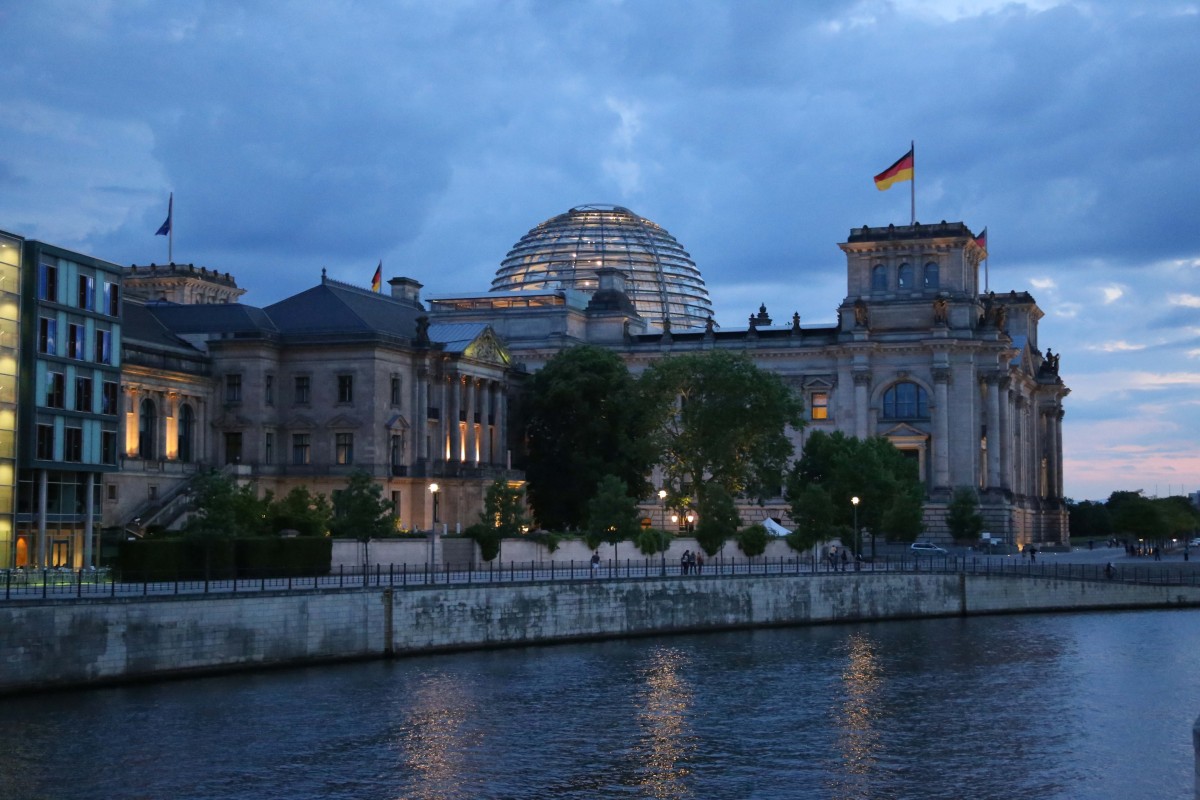 The Reichstag building seen at night in Berlin, including its illuminated dome. Image Credit: Wikimedia Commons.
By Jennifer Micale

After the famous wall crumbled, a global tide of investor money washed over Berlin. And then the cranes moved in.

The reunification of Germany transformed this storied city into an increasingly contemporary metropolis. Private corporations such as Mercedes-Benz and Sony built new complexes. New housing and cultural institutions arose. The air was full of excitement; it felt like anything was possible.

“Berlin is a fascinating city. It bears the brunt of these brutal conflicts in the 20th century, is divided and then is reunited, but still bears scars,” reflected Binghamton Associate Professor of Art History Julia Walker.

In her new book, Berlin Contemporary: Architecture and Politics After 1990, Walker explores the years following reunification, when Berlin became the largest construction site in Europe. Striking new architecture proliferated throughout the city in the 1990s and early 2000s, including highly contested projects under the aegis of the national government.

As an architectural historian, Walker is fascinated with the culture of blockbuster contemporary architecture, the kind that features large commissions and prominent architects. Eye-catching designs allow emerging or changing nations to promote an image of themselves, in effect promoting their political aspirations.

Sites such the Reichstag, the Chancellery and the reconstructed Berlin Stadtschloss, now known as the Humboldt Forum, demonstrate the complexity of Berlin’s political and architectural rebuilding, including its negotiations with a painful past. The national government sponsored a series of massive design competitions, the largest ever held in the world; one drew more than 1,100 entries.

“The message was that Germany was trying to rebuild responsibly, with an eye toward its international reputation in this increasingly globalized moment,” she said.

“Even when it seems like buildings are trying to ignore the past, that’s a historical position,” she said.

After the first wave of contemporary projects, history made a resurgence. Architects were called to design projects that dealt with the Berlin’s complex past in some way, and the competitions swirled with discussion.

One of the most iconic buildings in Berlin is the Reichstag, constructed in the late 19th century for the newly formed German parliament. With its eclectic mix of styles, it was considered rather ugly in its early days. In some senses, so was the government it housed; first under the Kaiser, then under the Nazi regime and later with its eastern half under Soviet control, Germany didn’t function as a full democracy for long periods.

“There was a lot of debate about whether this building would house the new parliament of a reunified Germany. It was decided that it would, but it needed to be adapted to suit this new, reunified nation and its hopes,” Walker said.

A massive design competition ensued, won by British architect Norman Foster. His winning idea: Rather than the historical dome, considered a totalitarian symbol, the building would be covered by a massive canopy. It would make the Reichstag appear almost like it was preserved in a museum display case.

Then the German government changed course. The project budget was slashed and the canopy wouldn’t work. Instead, it was replaced by what Foster called a lantern: a glass dome with a mirrored cone at its heart. Visitors can go up onto the building’s roof and see the parliament debating below reflected in the glass dome, albeit in a kaleidoscopic, fragmented view.

It’s a visual metaphor, in fact: a kind of visual dialogue between the heavy stone of the past, surmounted by the lightness of possible futures. Today, the Reichstag is the single-most visited tourist site in the country and essentially the symbol of Berlin, shared on social media feeds.

“Instead of the old, aggressive dome, this is meant to be a dome of the people. This is a lantern of democracy, a beacon,” Walker explained. “It’s one of contemporary architecture’s biggest success stories.”

Not every building project has a happy conclusion; Walker ends with the troubled Berlin-Brandenburg Airport, meant to consolidate the region’s three airports into a stand-out international hub.

“The word ‘debacle’ does not even begin to cover what happened with this airport,” she said.

She recited a litany of woes: A flurry of lawsuits, failed privatization, massive cost overruns, a confusing design, delays spanning nearly a decade, dubious aesthetics. And then there was period in which the airport was essentially running all its energy systems 24 hours a day, but no flights were leaving — draining not only money but resources in a sustainability-obsessed country.

Opening day finally arrived — in October 2020, just months after a pandemic shut down travel across the globe.

Overall, Walker’s research shows that architecture involves more than planning new buildings; it’s a very public way of coming to terms with the history of a community or nation.

With Berlin’s boom drawing to a close, Walker is now considering her hometown: Austin. The Texas city exploded during the past two decades because of the tech industry.

“I’m keeping an eye on what Austin can tell us about architecture and its relationship to the past. Any place that’s experiencing a building boom can tell you a lot about history,” she said.