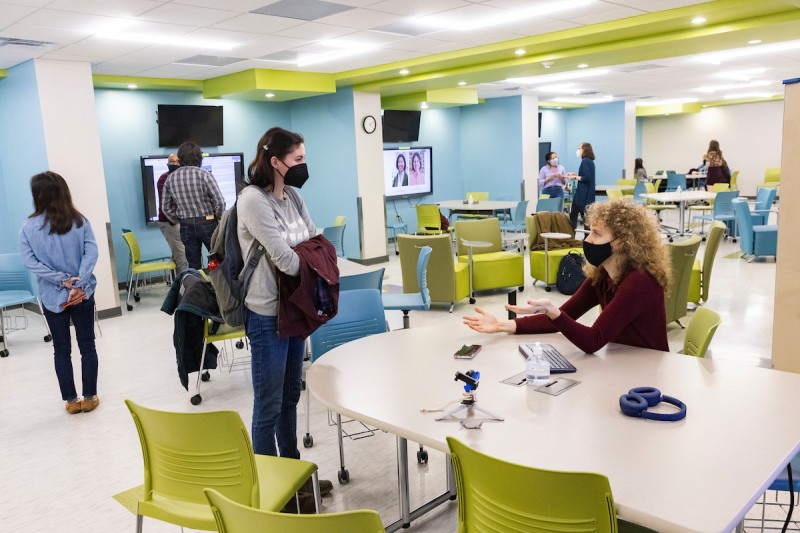 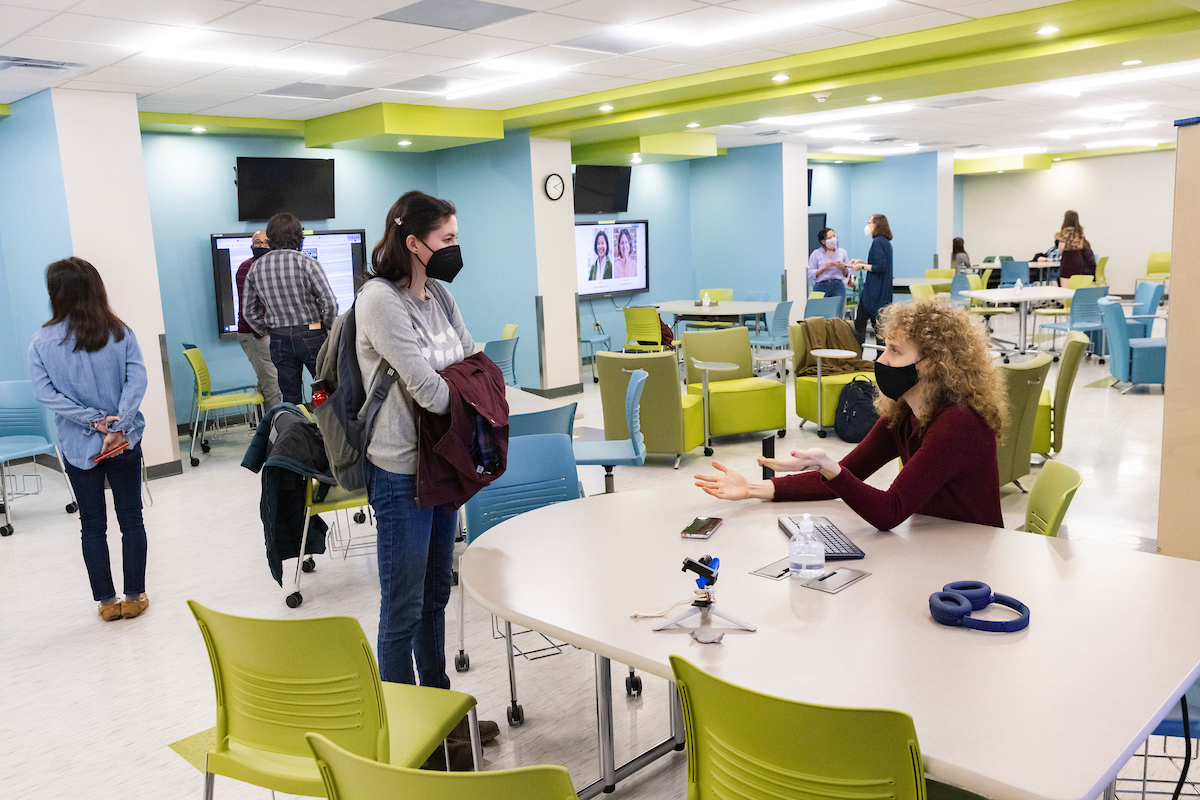 Academic papers aren’t the only way to share discoveries in the liberal arts and sciences. On March 25, Harpur College professors and graduate students shared their digital storytelling strategies with the campus community, hoping to spark interest in new platforms and methods. The event was a precursor to a hands-on digital storytelling workshop, which will be held from Aug. 8–12 this year.

“Digital storytelling is a new way for people to communicate their research,” explained history lecturer Chelsea Gibson, who organized the showcase. “We want to encourage faculty to use these strategies in the classroom.”

The showcased projects were wide-ranging. Assistant Professor of Art and Design Gökhan Ersan demonstrated the use of graphic design to illustrate complex concepts in chemistry and physics, while John Lee highlighted efforts to compile a multigenerational archive of the Binghamton punk scene. Sparked by last fall’s Binghamton University Art Museum exhibit on punk, “Now form a band,” the archive collects and preserves materials digitally, and includes audio interviews.

“We want to make it so that anyone who has been part of the scene can connect to it without giving up any of their material,” said Lee, stacks maintenance coordinator with the libraries.

Comic books — or graphic novels — are also being used to communicate complex ideas and relationships. The format may make these ideas more accessible to a larger population, such as children or people with learning challenges.

While such projects can be assembled by hand, software makes their creation easier, and innovations such as Discord servers can give subjects a space to interact and share their own stories, said Anthropology Professor Joshua Reno, who shared graphic novels created by his students at the event.

In one, the graduate student author illustrated an ethnographic study that involved a former boyfriend of hers, originally from the Middle East; the first frame shows the two talking together in bed, with the subsequent frames flashing back to his experiences in his home country. In a second example, student Annabel Fair ‘20 ran a Discord server to collect monster-themed stories from the LGBTQ community, and then created a ’zine with the help of participants in that online community.

“I encourage students to create projects that can do some of the same work that anthropology does in written form,” Reno said.

The goal is to have the children assist in collecting amphibian biodiversity data for a community science initiative, she said. Her students also use social media and memes to summarize concepts and findings.

Biological sciences graduate student Theresa Kadish showcased the opportunities available on TikTok, a highly popular short-form video platform. In addition to being active on TikTok herself, Kadish has taught a crash course through Harpur Edge on using the medium to communicate work and career goals. Kadish, whose academic discipline is mycology (the study of fungi), was also a teaching assistant in a class that had students create TikTok videos describing mushroom species.

A good TikTok video can attract a massive amount of views; in her most popular post, Kadish garnered 11 million, she said. But there are downsides to the platform, too; TikTok can delete posts without warning or explanation, probably because of the massive amount of material uploaded every day. The videos are also short, although the company recently expanded the maximum length to 10 minutes.

“It’s a platform that gives me the opportunity to reach millions of people, but you have to fit TikTok’s parameters,” she said.

Podcasts are a popular option to share longer-form digital narratives. Doctoral candidates Shruti Jain and Le Li have created one called “Immigrants Wake America” in partnership with the Tenement Museum in New York. The two are international students; Jain is from India and studying English, while Li is from China and part of the Translation, Research and Instruction Program (TRIP). The podcast showcases stories about immigrants, with a particular emphasis on women; there are three episodes so far, Jain said.

Jain mastered the skills she needed through an introductory course in podcasting offered through the English Department. Sarah Bull, a lecturer with the Writing Initiative, teaches the undergraduate version of the course Writing and Producing Podcasts; in her class, Bull’s students examine 10 different genres of podcasts, analyzing the rhetorical strategies, narratives and more. For class presentations, some even create their own podcasts to offer analysis on other podcasts.

Students working on their own podcast or video projects can take advantage of a recording studio in the Bartle Library, a space that includes microphones, a camera, backdrops, access to software and more.

Bull actually has a comedy podcast of her own, How It Came to Be, about bizarre origin stories. In class, she draws on that experience to discuss the challenges of writing for the medium.