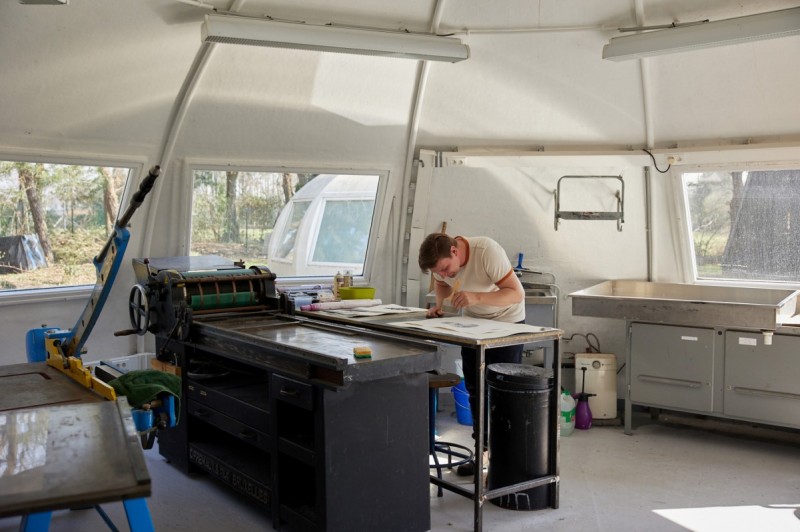 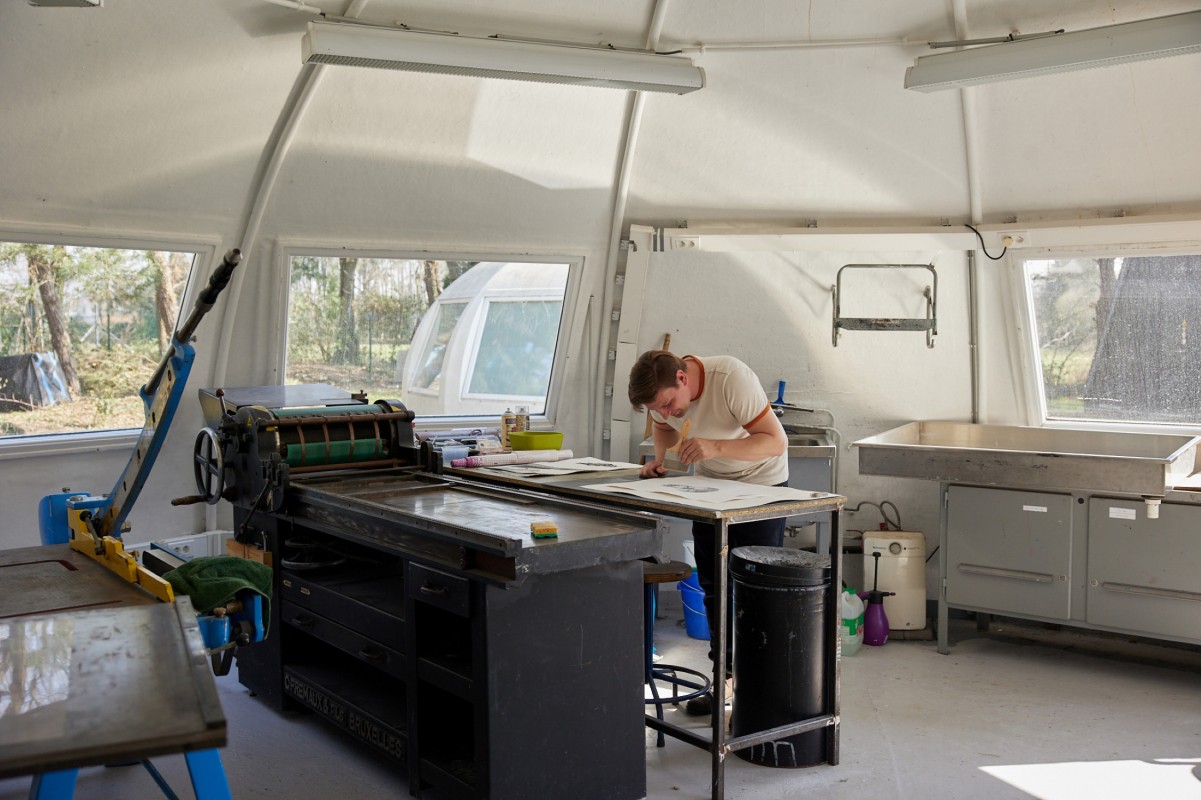 The impact of human activity continues to send global temperatures climbing. Can geoengineering save us from a warming world?

Intended to combat or otherwise technologically adapt to climate change, geoengineering technologies have a dystopian sci-fi feel, reflected Assistant Professor of Art and Design Colin Lyons, who explores the connecting between climate engineering and alchemy in his art installations.

In his projects, Lyons seeks to capture the tensions and possibilities of geoengineering, which involves radical strategies that are, at present, years away from implementation. One such proposal, for example, would use high-altitude jets to spray sulfur particles into the stratosphere to reflect sunlight away from the Earth, mimicking a process seen in volcanic eruptions. Another would construct a giant sunshade around the planet, Lyons explained.

Lyons’ artistic exploration will take him around the world during the next year during four artist residencies, all supported by a Research and Creation grant from the Canada Council for the Arts.

He began the spring in Belgium, working on an experimental printmaking project. This summer, he heads to New Hampshire, before ending the year on a remote island off the coast of Finland. And that’s not all: next spring, he’ll be on a Barquentine sailing vessel [a vessel with three of more masts] in the Arctic circle.

“Geoengineering has a messianic tone to it, a way of absolving us from the sins of the Anthropocene,” he said. “A lot of projects that I’m working on also have a ritual undertone, which is obviously divorced from science and engineering.”

At Frans Masereel Centrum in Belgium this spring, Lyons worked on a series of etchings combining elements of geoengineering technologies with alchemical imagery. He began with a handmade etching, then layered it with odd inks made of iron sulfate, crude oil and sulfuric acid.

Much of the imagery comes from Hendrick Goltzius, a 16th-century Dutch engraver and alchemist who did a series of images based on Ovid’s Metamorphosis featuring detailed cloudscapes. Rather than gods, Lyons populates the cloudscapes instead with technological images — a visual commentary on the hubris of those who seek to use them.

“I was thinking about geoengineering as a kind of contemporary alchemy with, in some ways, similar goals,” he said.

While in Belgium, he planted the seed for future installations by researching Kelmis, also known as La Calamine, an old zinc mining town. Until it was annexed by Belgium after World War I, Kelmis was a disputed territory between several nations known as Neutral Moresnet.

“It was just a wild place; utopian ideas were being developed there,” Lyons said. “They had a push to make Esperanto the official language. A lot of things were happening there that wouldn’t be possible in a nation-state; it existed as a kind of company-town-city state, I guess you could say.”

Because of mining-related contamination, plants grow in Kelmis that have adapted to high zinc levels. Lyons is fascinated by the unusual adaptations that happen after industry, in both human communities and the natural world, he said.

In June and July, he will take part in another residency at MacDowell in New Hampshire, where he will focus on a solo project called the “Alchemical Valley Geoengineering Seed Vault.”

Then, in December, Lyons will head to Finland for a residency at ÖRES, located on Örö Island, a former military fortress island turned nature preserve in Finland’s Archipelago National Park. Projects there focus on experimental fields of art, art-science collaboration and interdisciplinary projects. For much of the time, he will share the island with only one other person, another artist in residence.

While there, he will work on a project called “Operation Habakkuk,” which centers on competing geoengineering technologies being proposed for the Arctic. In one, wind-powered water pumps would bring warm water up to the surface and mist it in the air, thickening the ice during winter. Another would create artificial icebergs by desalinating Arctic Ocean water and recasting it into hexagonal ice-forms. And then there’s the proposal to sprinkle silica sand — essentially tiny glass beads — over the Arctic to make it more reflective.

Lyons will combine these proposals into a single art installation: the creation of an ice-raft based on the one-man rafts used by the military. The title references a special operation during World War II, for which the Canadian government made a scale prototype of an aircraft carrier built out of a combination of wood pulp and ice.

“I was thinking about the convergence between these geoengineering technologies and the history of militarization,” he said.

His world tour wraps up in spring 2023, when he will board a Barquentine sailing vessel in the Svalbard Archipelago with other artists and scientists as part of The Article Circle Residency. The artists and scientists will spend two and a half weeks on a sailing ship that leaves from Svalbard, where the global seed vault is located.

Lyons isn’t yet sure what artwork will be sparked by this trip, although it meshes well with his interest in the Arctic, climate change and the landscape — and geoengineering.

“I think nobody wants to see these things implemented, but we’re moving in a direction where they are becoming scarily realistic,” Lyons said.