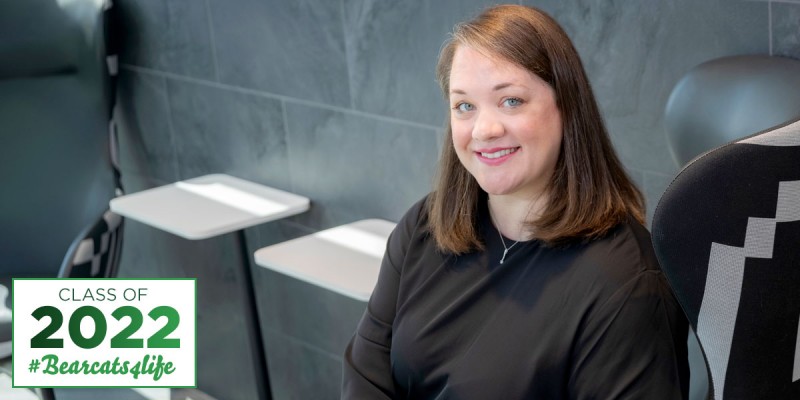 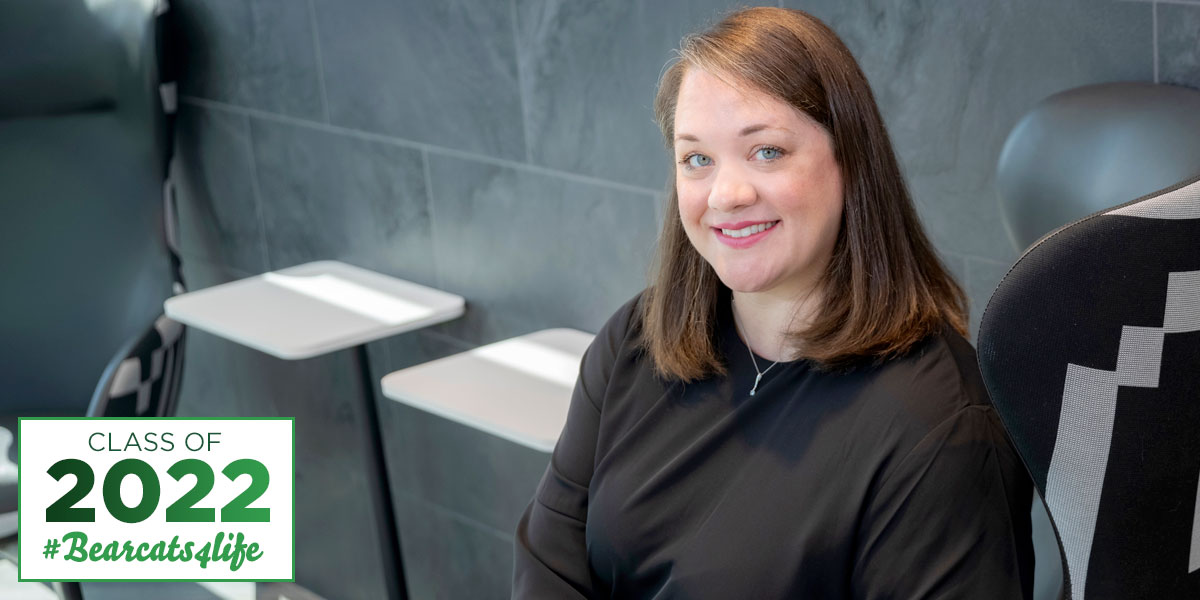 A registered nurse, wife and mother, Annie DePugh chose to study part time for a graduate degree in public health since it fit in better with her personal and professional schedules. She is graduating in May 2022 with a Master of Public Health (MPH) degree. Image Credit: Jonathan Cohen.
By Natalie Blando-George

In high school, she dreamed of working for the American Red Cross and encouraged her classmates to become organ donors. So, when a recruiter at the University at Buffalo suggested a major in nursing, DePugh took the advice.

She did well in nursing. She loved her fellow students, the program and her professors, but she was most intrigued by the courses in community health.

DePugh began applying to graduate programs in public health in her senior year and was accepted into the University at Albany’s Master of Public Health (MPH) program.

“I love being a nurse, but direct patient care was never the end goal for me,” DePugh said. “I knew that my next step was not going to be working on a nursing floor in a hospital; I wanted to get an MPH. I wanted to look at aggregate community wellness.”

DePugh graduated from Buffalo in May 2008 with a bachelor’s degree in nursing and passed the National Council Licensure Examination (required to become a registered nurse) that summer. By the time her MPH classes started at Albany, she had a graduate assistant position and had started to put her RN license to good use, securing a job administering flu vaccines for Maxim Healthcare Services.

“I was getting to use my nursing degree, but in a community health way. It was really wonderful,” she said.

While working as director of clinical services for Maxim Health Services in 2011, DePugh gave a flu shot on air to none other than Anderson Cooper on the Anderson Live show! The segment also featured CNN’s Sanjay Gupta, MD, who talked about the importance of getting a flu shot.

Then, the U.S. economy crashed and DePugh noticed the MPH students who were graduating were struggling to find jobs in the field. With the future uncertain, she applied to a hospital in Albany and was quickly hired as an RN on a critical care unit.

She decided then to put her graduate program on hold, though she expected to return within a year or two.

Over the next few years, DePugh left the hospital and rejoined Maxim Healthcare Services, working in home care. She was promoted to director of clinical services and moved to White Plains, N.Y., before leaving Maxim to become a discharge planning nurse at Blythedale Children’s Hospital in Valhalla, N.Y.

“Once again, I was straddling acute care-community care nursing,” DePugh said. “I had my nursing license and I had a year of MPH under my belt, but I was taking a new approach to using my RN license and my skillset.”

A visit home changed everything

During a visit to her hometown of Vestal, N.Y., DePugh reconnected with a man she had known since they were middle-schoolers. The two fell in love and began applying to jobs near each other.

DePugh soon got a call from UHS (a healthcare system in the Binghamton area) and was hired as a nurse care manager for a program called Medicaid Health Home.

Almost 10 years and a couple of promotions later, DePugh is now a system director in UHS’ Population Health Management Department.

“Keeping patients safe, happy, healthy and as independent as possible is something I feel very strongly about,” DePugh said.

In 2018, Binghamton University President Harvey Stenger gave a presentation at UHS about the University’s expansion plans into the health sciences. That’s when DePugh learned Binghamton had launched a Master of Public Health program the previous year.

“When I heard that, I knew I couldn’t pass up the opportunity to finish my MPH degree,” she said.

Before she applied to the program, DePugh met with Yvonne Johnston ’93, MS ’97, associate professor and founding director of the Division of Public Health at Binghamton’s Decker College of Nursing and Health Sciences. DePugh was curious about her options and acutely aware that: 1) It had been a decade since she completed her first year of the MPH program at Albany, and 2) Earning a graduate degree would be a challenge with a full-time job, a husband and a child.

At the meeting, DePugh found Johnston and Christine Podolak, associate director of experiential education, Division of Public Health, extremely supportive. “I remember driving home after that meeting thinking: I have to do this. I want to do this,” she said.

Ready for whatever may come

“Annie has been an excellent student,” Terriquez-Kasey said. “Her focus has allowed her to grow in the program and her views have helped the other students have a different perspective.”

DePugh began the MPH program in fall 2019 with an added consideration: She was pregnant with her second child. Then, the COVID-19 pandemic hit. She initially planned to take the fall 2020 semester off for maternity leave, but since the University was fully online that semester, she continued the MPH program without requiring a break.

Binghamton’s MPH program offers a part-time option, which enabled DePugh to work around her family and full-time job at UHS. It was a challenge, she admitted, as was the fact that DePugh is older than her classmates.

“There is definitely a noticeable age gap, but it isn’t something that was disruptive,” DePugh said. “It didn’t bother me and I hope it didn’t bother the rest of the cohort.

“I’ve got at least 10 years of occupational experience. I’ve been through H1N1 and Ebola, so I feel like that was my contribution to discussions in classes,” she added.

That vast experience was put to good use during DePugh’s three MPH internships, which focused on developing and running a high-risk COVID vaccine clinic at UHS. The initiative came about early on during COVID vaccinations as healthcare workers were among the first eligible to receive vaccines. UHS recognized the need for a safer vaccination setting for employees with a history of allergy or severe asthma. The clinic was located opposite the Emergency Department at UHS Binghamton General Hospital, making it faster and easier to get care if an individual were to go into anaphylaxis or have another negative reaction to the vaccine.

It was a great idea, and didn’t stay under wraps for long. Soon, staff at the state-run mass vaccination clinic in Johnson City, N.Y., were sending people over based on their medical history or their negative response to the first dose of the vaccine. DePugh said more than 200 people were sent to UHS’ high-risk clinic, where she also served as a vaccination nurse.

COVID was also the focus of DePugh’s MPH capstone project. She created a survey that evaluated occupational attitudes and behaviors toward the COVID-19 vaccination.

“It has been really fascinating, and of course, tragic, to live and breathe this pandemic and have the opportunity to work so closely with the COVID vaccine,” DePugh said. “And, I have come full circle because when I was in my first MPH program, my initial occupational experience was giving flu and H1N1 vaccines.”

Later this month, DePugh will finally have her MPH degree. What’s next for her?

“I’m blessed in that I’m already working in population health and occupational medicine, but I think [the MPH degree] can only open new doors,” she said. “In this post-pandemic world, I’m open to whatever, how ever, I can serve the community.”