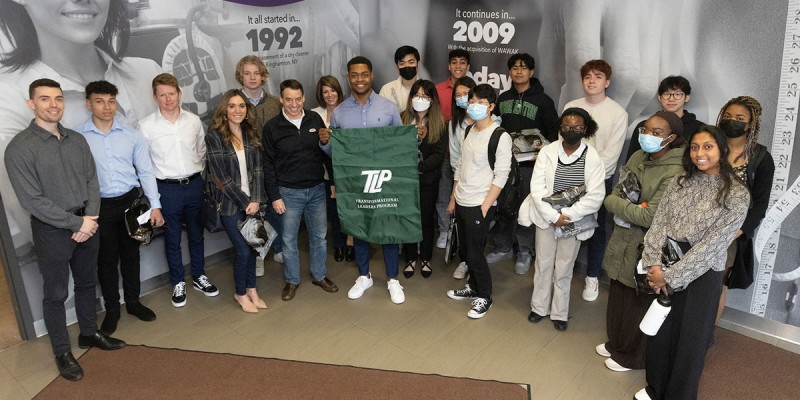 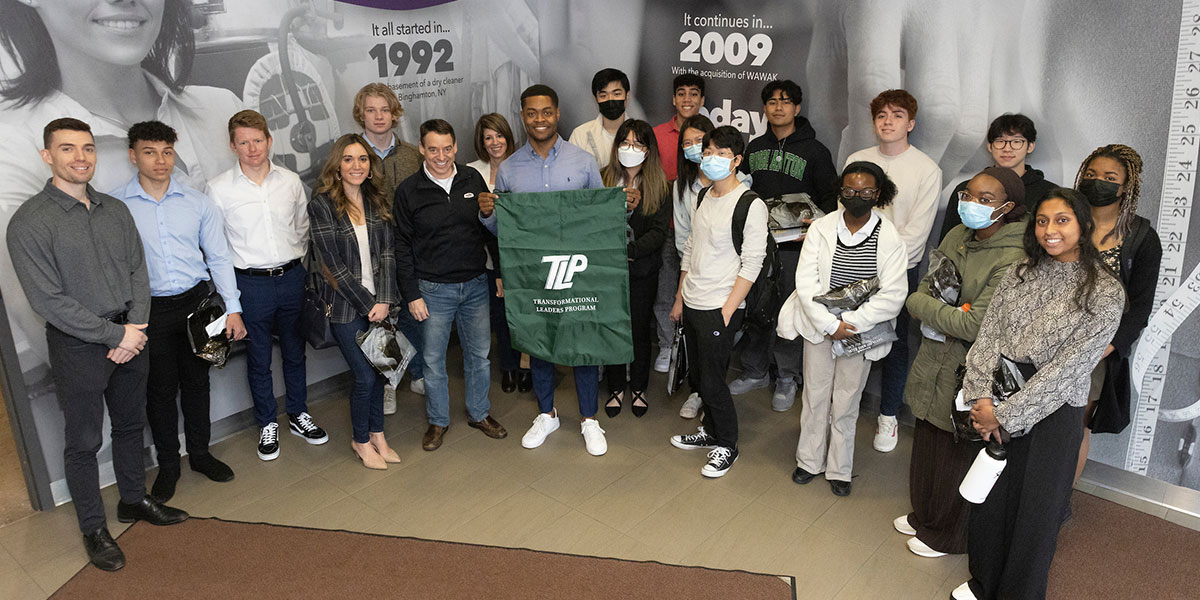 When looking back on her first few days at Binghamton University, Yuliah Johnson recalls feeling how different college was than high school.

“The biggest difference was the sudden accountability of having to do your work and keep up with your schedule. You had to be disciplined and know what needed to be accomplished each day,” says the Oneonta, N.Y., native.

Navigating the fast-paced environment of college sometimes makes it easy to lose sight of the big picture. Students may not realize how habits and decisions made in the present can impact the future.

An ambitious new program in the School of Management (SOM) is helping students keep that big picture in mind. Launched in fall 2021 and currently in its second year, the Transformational Leaders Program is already reaching its goals of developing the next generation of leaders both on and off campus.

“The program has had an impact on me,” says Johnson, an accounting major. “It allowed me to reflect on myself and think about how I want to move forward in the future.”

The seeds of the Transformational Leaders Program were planted years ago in conversations between Upinder Dhillon, former SOM dean, and alumnus Mark Zurack ’78, LHD ’03. Both wanted to craft new ways to further the school’s mission of accessibility.

“They recognized the importance of public education and wanted to address the profound barriers that many still have to overcome to get here,” says Dean Shelley Dionne.

The resulting three-year program enrolls students who are from underserved populations or may be facing economic challenges. By leveraging the school’s strengths in the area of leadership studies, the program provides personal, academic and career development opportunities tailored to individual needs.

The program is overseen by Jerah Reeves, a former college football player who planned to continue his athletic career until disruptions caused by the COVID-19 pandemic led him to a different path. He enrolled in a sports administration master’s degree program instead, and served an internship as a student athlete development assistant that had a major impact on him.

“You get the opportunity to focus holistically on the student athlete. You learn, and put into practice, what it takes to make a successful person on and off the playing field,” Reeves says. “It gave me an idea of how to take that template from athletics and apply it elsewhere.”

The experience caused him to take a further interest in leadership development. When he found out about the Transformational Leaders Program, he knew he couldn’t pass up the opportunity to serve as the program coordinator.

Reeves translated that passion into crafting the curriculum for the program, and was able to turn to the Bernard M. and Ruth R. Bass Center for Leadership Studies (CLS) for help. Housed in SOM, the center was founded by Bernard Bass, who was widely recognized as a preeminent scholar in the field.

“The CLS is home to world-renowned leadership professionals. The fact that I am able to pick their brains and ask about anything I needed for this program is an unfair advantage,” Reeves says.

Before he knew it, the 20 students enrolled in the inaugural year of the program, including Johnson, arrived on campus.

“I don’t know exactly what I expected out of the program, but it sounded interesting,” Johnson says. “I decided to have an open mind to whatever was to come.”

Each year of the Transformational Leaders Program focuses on the development of a specific skill set. This is accomplished through activities such as classwork, one-on-one mentorship, networking opportunities, employer visits, community service and professional development workshops.

The first year centers on self-knowledge by focusing on oral communication, goal setting and accountability. Year two prioritizes working effectively within teams and groups, while the final year of the program is about coaching and mentorship. Students eventually become mentors to new students in the program and are encouraged to take on leadership roles around campus.

“We want students to take what they learn and put it into practice. We want them to lead organizations and teach others about conflict management and accountability,” Reeves says.

It all starts with personal habits though, which is the focus for new students in the program — most of whom are new to college.

“We talk a lot about our values and what we hold true to ourselves,” Johnson says. “We talk about having a growth mindset and what success means. We’re building a foundation of knowledge of ourselves and how we should carry ourselves through life.”

“When I talk with students, the first thing we do is a wellness check to see where they stand, and then discuss why that is,” he says. “We’re not just focusing on academics. We’re focusing on sustaining progress and sustaining relationships and taking a step forward in all those areas.”

Professional experiences are also an important part of the program. Students take part in industry visits and meet with top executives from major companies.

“Exposure leads to expansion. I want you to see yourself shaking the hands of CEOs and leaving an impression on them,” Reeves tells the students. “Once you expose yourself to that, you change your behavior to achieve that feeling in that environment again.”

As for what’s next, Johnson looks forward to mentoring first-year students in the program.

“I want to help students make sure that they’re not as lost and as scared as many people are when they first come into college, because it’s a big change. It’s definitely different than the lives that they were used to,” she says.

Now a sophomore, Johnson believes the program has been integral to her college experience.

“I feel like if I hadn’t joined the program, I really don’t know what my life would look like right now,” Johnson says. “It’s helped me set goals and work toward those goals.”

Seeing the impact it has made on students like Johnson, Reeves is optimistic about the positive effects the program will have on the campus community.

“You realize that there are people with some unreal potential that just needs to be pulled out of them. We’re helping them do that,” he says. “It changes everything, and Binghamton University will see the fruits of that shortly.”