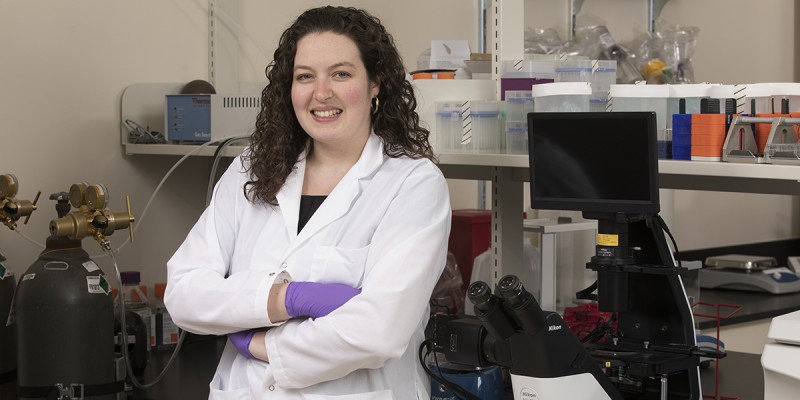 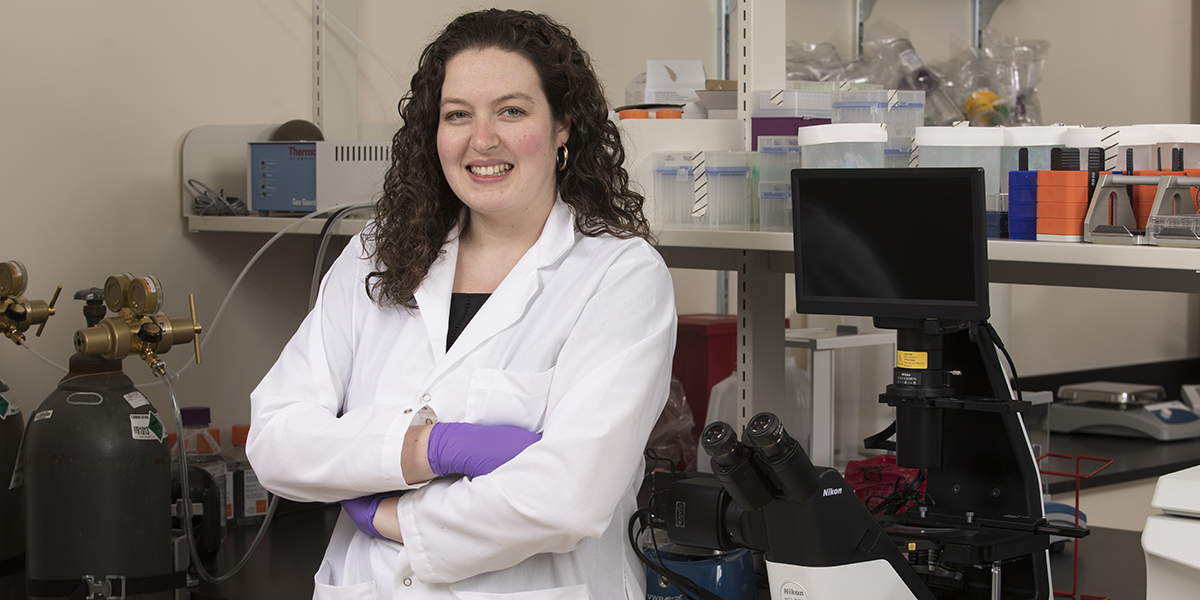 Considering that the heart is the most critical organ in the body, there are still many things we don’t know about how it works.

As a member of the Binghamton University faculty for the past five years, Assistant Professor Tracy Hookway has received funding from the National Institutes of Health and other sources to create 2D and 3D models of human cardiac cells and investigate their functions.

She will continue that important research thanks to a five-year, $500,000 National Science Foundation CAREER Award that will explore the role of autonomic neural stimulation on the function of engineered cardiac tissues. A CAREER grant supports early career faculty who have the potential to serve as academic role models in research and education.

Hookway will study the interplay between the sympathetic neurons that speed up the heart’s beat rate and the parasympathetic neurons that slow it down. She calls it the “fight or flight” response versus the “rest and digest” response. Measuring heart rate variability — as our Fitbits and smartwatches do — is a key metric for overall cardiac health.

“If you look at the research that’s published in this field, there’s very little attention paid to this particular cell population, but it plays a critical role to keep your heart constantly beating,” said Hookway, a faculty member in the Thomas J. Watson College of Engineering and Applied Science’s Department of Biomedical Engineering.

Click here to find out about past winners of the NSF CAREER Award from Watson College.

“Electrical signals from the nervous system stimulate a particular location in the heart, but neurons throughout the entire heart help to fine-tune your beat rate.”

She sees a couple of reasons why this type of cardiac research has not been done to any great extent. For one, bioengineers mainly have focused on paring down their understanding of human cells to the basics.

“That’s a great starting point,” she said. “We’ve been there for a decade or two, but we’ve started to realize that we can only recapitulate function to a certain point. How simple is too simple, and what else affects function?”

Also, because she works on human tissue models, cardiac cells are especially challenging to get: “I can’t just get a biopsy of someone’s heart and start growing it in a lab — even if I could, those particular cells don’t divide and can’t be expanded in culture. It’s only been in the last five to 10 years when the stem cell-derived populations have started to get traction, and it’s hard and expensive to do.”

Hookway hopes that understanding more about the push-and-pull of the sympathetic and parasympathetic nervous systems will lead to increasingly accurate lab models of heart cells. That knowledge could help with heart transplants, neurodegenerative diseases, stem-cell therapies and pharmaceutical research.

“Liver and heart toxicity are the two biggest reasons that drugs fail, so drug researchers need good platforms to test all the candidate pharmaceutical compounds,” she said. “Sometimes it’s done on cell cultures and sometimes it’s done on animal models, but there is a big disconnect between animal models and how humans respond.” The human-based stem cell models she is developing may be the key.

As part of the educational component of the NSF grant, Hookway will develop game-based educational modules for high school students and undergraduate students incorporating tissue engineering, cardiovascular physiology, biomanufacturing and stem-cell biology. She loves games and sees this as a good way to promote a greater interest in science.

“I specifically want to target some of the rural communities in our region that don’t have access as easily to some of the programs that we have on campus,” she said.

Hookway is grateful for the support not just from her BME colleagues and students, but also Watson College and Binghamton University as a whole. She especially credits the Commit to Submit program from the Division of Research’s Office of Strategic Research Initiatives for helping her with the NSF CAREER application.

“It helped to keep me on track and made sure I was meeting milestones to get this done,” she said.

She also appreciates that the NSF chose her for a CAREER grant on her first time trying for it: “It’s validation that the questions you’re asking are truly important and other people see that. I think that is a confidence boost. It also gives more flexibility to go after collaborations more easily because some of the basic questions that we want to ask can be answered under this grant.”