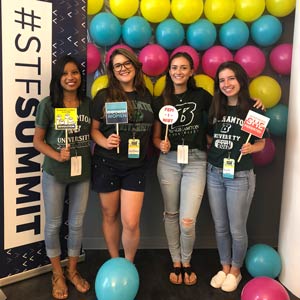 Katherine Scott, a senior double majoring in political science and graphic design, is the President of Binghamton University's chapter of She's the First, a national nonprofit organization that sponsors scholarships for young women in low-income countries to become the first in their family to receive a high school education. She's the First works with NGO partner organizations around the world to identify girls to support based on scholastic merit and financial need in countries such as Ethiopia, India, Peru and Nepal.

Scott initially found out about the organization last year when a classmate in her women's studies class announced that She's the First was having a general interest meeting that night. Excited about the opportunity to pursue her interests in women's education and equality, Scott decided to go and ended up becoming an active member of the club. Not long after that, she joined the executive board as a social media expert and has since become the president.

In order to sponsor scholarships for these girls, Scott and fellow members of She's the First fundraise throughout the semester, mainly in the form of bake sales on campus. Recently they have expand their fundraising efforts, though, organizing their first 5K last spring and more recently holding a self-defense training event in honor of domestic violence awareness month. Donations were welcomed from attendees at both of these events.

Scott says that it only costs around four hundred dollars to support one girl for a whole year — a goal that the Binghamton University chapter has already met this semester. Even though She's the First supports these girls financially, Scott stresses that they do not use the word charity to describe this organization.

"We just see ourselves as giving money to these girls who have to then work for themselves to get the education they need." She emphasizes that these girls love learning and have a hunger for knowledge and that they are the ones who have to work hard to use the money that She's the First gives them to empower themselves and get their education.

Once they find out what girls the money they raised has gone to, She's the First members develop relationships with them by writing letters and attending annual summits in which they can meet in person. Summits take place in the summer in New York City and give members a chance to see for themselves what the scholarship recipients have accomplished. Scott says they've seen scholars who have gone on to be valedictorians of their classes and have amazing career goals. She describes them as "sweet, gentle, intelligent women."

In addition to fundraising for these girls, She's the First also works to educate themselves and others about women's education and equality. "She's the First is definitely [focused on] fundraising, but we also want to educate our members about feminism and class and equality and things like that [both locally and] around the world." As part of their Global Awareness Program discussion series, Scott gave a presentation at last month's meeting on political leadership. "Not only are we fundraising for these great ladies in these countries to get an education," she says, "but we're also learning so much ourselves about things we may not have really deeply thought of before or really know much about."

Scott demonstrates passion for this club and is thankful for the experiences it has provided her, describing it as "such a treasure." She says members are working to expand the number of people who know what She's the First means and that it has been an honor being able to help these girls who are so hard-working and driven to get an education and do great things. "It's been very eye-opening, being a part of this organization. It's definitely [an experience] that I'm very happy to have been able to get."

Email She's the First to join their listserv and receive information about how you can become a member.