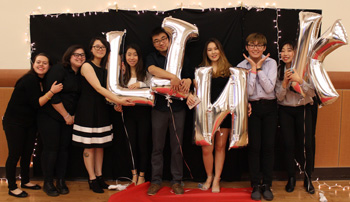 Liberty in North Korea (LiNK) is an international non-profit organization based in California with student-run rescue teams across different college campuses. They work to change the narrative surrounding North Korea "from politics to people," shedding light on the dire situation affecting its citizens, while fundraising to rescue North Korean refugees. Andrew Kang, the president of LiNK at Binghamton University, says the organization focuses on humanizing North Korean people, instead of only viewing them as a political entity through the distorted lens of the media.

"The purpose of LiNK is really just to change the perspective about the everyday lives of North Koreans," explains Kang. "Most of us - because of the media - think of North Korea as some corrupt, destitute place where all the North Koreans are brainwashed, and just because of the government they have no say in anything. But that's not really the case when you look at documentaries and look more in depth at the lives of the people themselves. They're just people trying to enjoy everyday life, and they're just born into some very unfortunate circumstances where they have a corrupt government."

Rather than focusing on the politics surrounding North Korea, LiNK aims to bring attention to the plight of its people. Binghamton University's LiNK organization hosts events to raise awareness around campus and develop funds to help liberate North Korean refugees. Once a refugee escapes to China, they face forced repatriation if arrested by the Chinese government, which guarantees extreme punishment, such as torture and prison camps. Their illegal status also makes them vulnerable to exploitation. But many refugees lack the resources and connections to get out of China. Donations raised by LiNK help bring refugees to freedom safely using established relationships with brokers and escape routes through China and southeast Asia. The money also helps support refugees with food, shelter and other necessities until they can get back on their feet.

The Binghamton rescue team recently started hosting more large-scale events to engage a larger audience and increase awareness about the club and its mission. Last semester LiNK hosted a male beauty pageant called Mr. Liberty, where six contestants showcased their fashion and talent and participated in a variety of games. A key portion of the event was answering questions about North Korea to provide the audience with information about the country and give some context into their lives. They provided surprising answers to questions, such as "What common article of clothing is banned in North Korea?" - denim jeans, in an effort to crack down on Western fashion.

LiNK's most recent fundraiser was a Korean food delivery service. They put together a menu of typical Korean street food, including kimbap, tteokbokki (spicy rice cake), Korean pancakes, gimmari (fried glass noodles in seaweed) and rice balls, and collected orders via email and Facebook. They made each order by hand and delivered them to students both on campus and off campus. Over 50 people ordered food, and the club raised about $800.

During the fall semester, LiNK invited a North Korean refugee to speak to students over Skype. "We invited people from the club to talk to [her] and just ask questions about what living in North Korea and growing up there was like," says Kang. "She shared her perspective and her own life story. We thought hearing the perspective of someone who has lived there directly might be interesting and be more effective."

Since its inception 11 years ago, the Binghamton University LiNK rescue team has donated about $10,000. They are currently on track to send over another $3,000, which is the approximate cost to save a North Korean refugee's life.

Kang says LiNK's short-term goal on campus is to gain more members. By building a larger audience, he believes the club can generate more awareness about the humanity of North Koreans. However, the long term goal is focused on the bigger picture. "[We need to] get past that barrier where people think of North Korea as that horrible, destitute, corrupt place where every North Korean citizen is bad - that kind of perspective that the media often portrays. Once we get past that, I think that will be the best milestone, and from there it'll be much easier."