Binghamton University junior Morgan Wood has been named as one of the 268 students who will make up the organization's 2018 cohort of Newman Civic Fellows. The Newman Civic Fellowship, named for Campus Compact co-founder Frank Newman, is a one-year experience emphasizing personal, professional and civic growth. Through the fellowship, Campus Compact provides a variety of learning and networking opportunities, including a national conference of Newman Civic Fellows in partnership with the Edward M. Kennedy Institute for the United States Senate. The fellowship also provides fellows with access to apply for exclusive scholarship and post-graduate opportunities. 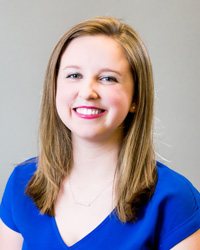 As a high schooler in Endwell, N.Y., Morgan Wood identified a strong passion for ensuring that women and girls around the world are healthy, safe and have access to education and leadership opportunities that will allow them to realize their own power and impact the world around them in positive ways. And ever since, she has been making impressive strides in realizing far-reaching change in these areas, on local, state and international levels.

Global advocate for women and girls

Wood's commitment to women's issues began in Maine-Endwell High School, where she started the first Girl Up club in Upstate New York. Girl Up supports United Nations programs promoting the health, safety, education and leadership of girls in developing countries. She was soon chosen as a Girl Up Teen Advisor, which meant she represented her school, state and country at events around the world, where she spoke to audiences alongside internationally recognized women's rights advocates such as Malala Yousafzai and Ellen Johnson Sirleaf, the president of Liberia and first elected female head of state in Africa. 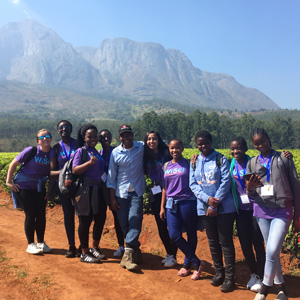 By the time she started at Binghamton University as a freshman, she had established the Upstate NY Coalition of Girl Up, which, under her direction, has grown to include thirty club chapters and hosted the largest coalition summit in the country in 2016. This past summer, Wood completed an internship with the U.S. Department of State and Girl Up, during which she helped plan and run a WiSci STEAM Girls Camp in Thyolo, Malawi, for 98 high school girls from across the African continent, empowering them with the knowledge and skillsets to be competitive with their male counterparts and providing them with access to high-tech resources, like-minded peers, impactful business connections and inspiring mentors.

"The experience changed my life," says Wood. "It solidified my belief that if we continue to uplift girls from all around the world, we will solve the world's biggest problems — not only issues of gender inequality, but also issues like climate change and closing the digital divide globally."

It's On Us — sexual assault prevention

On campus, Wood has also channeled a good deal of her energy and passion into the It's On Us (IOU) campaign, which is a national movement launched in September 2014 following recommendations from the White House Task Force to Prevent Sexual Assault. Wood is a member of IOU's National Student Board and is the campus organizer for Binghamton. She also acts as campus organizer on campuses where none exists and serves as a mentor for other campus organizers within our region. Additionally, Wood helped build the IOU coalition for all sixty-four SUNY schools, for which she was invited to meet Vice President Joe Biden in August 2016 at an event at his home recognizing student leaders who supported IOU on their campuses.

Wood's commitment to civic engagement has largely reflected her passion for creating a new global generation of strong female leaders, but it does not end there. She is also actively involved in the fight to address climate change. As a global strategy intern for the Citizens' Climate Lobby, she attended the 2015 United Nations Climate Change Conference (COP 21) in Paris, France. During the conference, she was chosen to introduce a "Youth Charting the Course" panel, which featured UN Secretary General Ban Ki Moon, UNICEF Executive Director Anthony Lake and other youth leaders on the future of climate change. Locally, Wood works on fostering campus and community coalitions with local government through her involvement with organizations such as CARE Action! and the Roosevelt Institute.