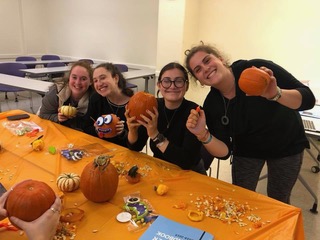 Randi Traison, a sophomore in the Decker School of nursing, has been an active member of her community long before coming to Binghamton. With aspirations of working in prenatal care, she has always had a passion for helping others. Originally from Michigan, Traison was a youth ambassador for the Juvenile Diabetes Research Foundation (JDRF) throughout high school, representing the Metropolitan Detroit area. Upon graduating from high school, she took a gap year to study abroad in Israel where she took coursework and volunteered with an ambulance service. Diabetes research has always been a very personal cause for Traison, though, who was diagnosed with type 1 diabetes at age four.

Traison has no recollection of life without the disease. Her parents raised her to believe that while it should always be on her mind, it shouldn't take over her life. "Growing up, I was always taught that I can do anything I want — I just have to remember to check my blood sugar." Since Traison was young, her family has always been active in supporting the JDRF. Traison eventually decided to become a part of their youth ambassador program because she realized it was important to help other people. As an ambassador, she attended conferences and spoke on the news and at fundraising events. Traison has also raised money on her own for the JDRF with the help of her family by writing letters and emails, posting on social media and even hosting fundraisers at her high school. She said that the majority of the money raised goes straight to research with some being used to educate the public.

On her first day at Binghamton, Traison happened to meet two other students who also had type 1 diabetes. This was the first time she'd had diabetic friends her own age, and they quickly decided to form a College Diabetes Network (CDN) chapter at Binghamton, of which she has since become the vice president.

At first, as part of the CDN, Traison and fellow executive board members put on events to educate others and eliminate common stereotypes associated with diabetes. Realizing it was more important to create a community in which type 1 diabetics could feel close, they started focusing their efforts on putting on events to help members get to know each other and have a source of support. In addition to the time they set aside to get together, the support system they have created also involves a group chat in which they can stay in touch.

"Our main goal is to create a supportive atmosphere where we can reach out to each other," she says, "because it can feel lonely when you're away from home." She goes on to explain that a lot of people in the CDN are actually newly diagnosed, so it is also a great tool for them to learn directly from other type 1 diabetics how to manage the condition.

Recently, Traison and her fellow e-board members have started talking about ways to develop and participate in community outreach programs in order to extend this support system to local community members who are also affected by type 1 diabetes.

They are in the midst of planning a spring event for local families, which was inspired by a local parent who reached out to them on social media, asking them to put on events for the community in order to show her child and other children in the area that they can achieve anything despite having diabetes. Traison says they hope to include a panel discussion in which she and other CDN members can tell their stories and answer questions. Such an event will help to further build and strengthen the community of support Traison has helped develop. She thinks it is very important for kids to have people to look up to who understand what they go through. They have also considered starting a mentoring program for type 1 children in the Binghamton area.

Traison and the CDN have come a long way since their establishment and will continue to work on expanding the success they have already experienced. She is proud of her accomplishments thus far, mentioning the success of the CDN's most recent event, which gave her the sense that this year the CDN will be a close-knit community, whereas last year they had to focus mostly on the logistics of getting it started. All of their hard work has been well worth, and Traison is looking forward to what is still to come.

Follow Binghamton University's College Diabetes Network on Facebook to learn about their upcoming events. Email the CDN or Randi directly if you are looking for support or to get involved.

Nov. 14 is National Diabetes Day. The CDN will be turning the Bartle Library Tower blue to raise awareness for type 1 diabetes.