Although it is a student run group, Harpur's Ferry is also a non-profit agency serving not just the on-campus population, but also anyone in need in the Broome County area.

"Most collegiate EMS agencies don't actually have ambulances," explains Baumgarten, "which is kind of ironic. Most of them are first responders: they get a call and they show up there first, and then local fire departments or ambulance services will show up and transfer care."

"In Harpur's Ferry, we have our own advanced life support ambulances that treat any campus community members, anyone in downtown Binghamton or Johnson City and any off-campus students — anyone from the Broome County area." For example, in March of this year, Harpur's Ferry provided assistance to community members during the blizzard.

"The most meaningful part of Harpur's Ferry is we get called on people's worst days on a regular basis," says Stephen. "No one likes calling an ambulance; it's a big deal whenever people call one. We're showing up and helping people on their worst days. We're able to make a difference and make that person's worst day a little better." 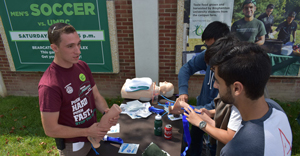 Harpur's Ferry holds general interest meetings and accepts new applications at the beginning of each fall and spring semester. Every year at the Welcome Back Weekend, they offer compression-only CPR and defibrillation classes at no cost. They also offer the Stop the Bleed program, which provides free classes to people on duty control of large scale traumatic incidents. Interested students can contact Harpur's Ferry via their website for more information on how to get involved.

Pictured, top: Alex Mandell, Stephen Baumgarten and Meir Berkman of Harpur's Ferry with Senator Charles E. Schumer (D-NY) after Shumer's announcement on Feb. 23, 2017​,​ that he​ helped to​ secure more than $2 million from FEMA ​to reimburse the University for funds it used to repair the Downtown Center, which suffered devastating damage ​as a result of​ Tropical Storm Lee in Sept. 2011. Bottom: Meir Berkman, 2016-2017 chief executive director, talks to students interested in Harpur's Ferry.