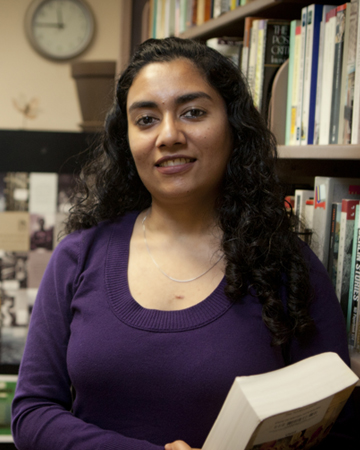 Praseeda Gopinath’s research and teaching interests include masculinity and gender studies, Twentieth century British literature, postcolonial studies, and South Asia studies. She is the author of Scarecrows of Chivalry: English Masculinities after Empire (University of Virginia Press, 2013). She has published work in Contemporary Literature, South Asian Popular Culture, Oxford Bibliographies of Literary and Cultural Theory, Textual Practice, Journal of Celebrity Studies, and Studies in the Novel, among other journals and anthologies. She has co-edited a special issue on Masculinities forSouth Asian Popular Culture and a special issue on Gendered Soundscapes of South Asia for the academic blog, Sounding Out!.

Her current transdisciplinary project, tentatively titled, Vernacular Masculinities: Men in Place, explores the literary and cultural forms of local masculinities and their disruption in contemporary India. Focusing on the formation of masculinities that emerge within the precise conditions of a place or region, the book decenters the nation or the national. Importantly, in this moment where an exclusionary and violent Hindutva masculinity is in the process of “national” consolidation, this book considers the persistent disruptions of vernacular/local masculinities. In moving away from the national, transnational, and nation-state and generating nuanced analyses of the discursive production of masculinities, Vernacular Masculinities enacts a more dynamic approach to thinking about gender formation.

As a literary, critical, and cultural study, the book considers not only how masculinities emerge in and through representation, but the process of representation itself. Through its close textual and formal analysis, Vernacular Masculinities demonstrates how masculine forms are fluid, contingent, and varied, and in doing so, emphasizes how caste, class, region, space, religion, language, and sexuality are constitutive of gender and its representations. Examining the ways in which everyday practices of life, the local historical imaginaries, and discursive structures shape the representation of masculinities, the book moves across literature, film, radio, and music. It tracks the mediated continuities, disruptions, and deviations in masculine praxis and performance.