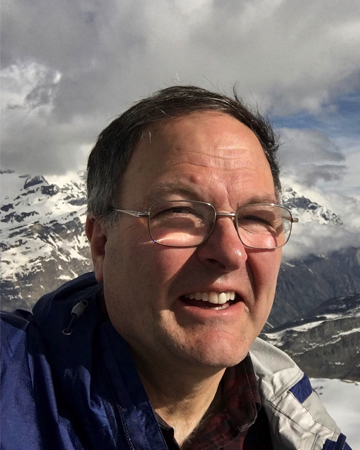 Eric Cott's laboratory studies atomic transport and mass transfer in thin film metal systems and in liquid systems, with particular emphasis on materials for electronics packaging. They use calorimetry to directly monitor the rate of solid state and liquid/solid reactions in thin film systems. Such calorimetric measurements of enthalpy release, along with standard heat capacity studies, provide determinations of thermodynamic functions as a function of temperature. Their goal is to understand and to model the basic mechanisms of these thermal processes.

"The study of interdiffusion in thin film metal diffusion couples at low temperatures and short-length scales yields new information to complement high temperature studies. In their lower temperature studies, kinetics become determinative in phase formation. Many alloys from the equilibrium phase diagram cannot be readily formed. Furthermore, thin films of metastable alloys, including amorphous alloys, have been observed to form over 1 to 100 nm length scales under these conditions. Both the formation of new materials by means of solid state reaction at interfaces and the integrity of multilayered structures demand an understanding of this problem. Examples include the formation of metallic glasses at metal/metal interfaces, the formation of silicides at silicon/metal interfaces, the preservation of metal/semiconductor interfaces and the preservation of interfaces in structures such as electronics packages. They seek a better understanding of the influences of atomic size, of defects, of grain and of grain boundary structures of parent and product phases upon diffusion rates in these phases. Their primary methods include direct monitoring of nucleation and growth rates by means of differential scanning calorimetry (DSC), and structural characterization of parent and product phases by a number of means including x-ray diffraction, optical and electron microscopy.

Cott's laboratory studies mass transfer in liquid systems, in particular those found in electronics packaging, including solder/metal and dense suspensions such as underfills. A description of flow processes requires an understanding of several features. These include the behavior of liquids and suspensions, the wetting phenomena and the effects of flow geometries. Prominent features of suspensions include the dense particle fill factor, particle sizes and the density difference between the particles and liquid carrier. They are focusing on the interaction of these parameters and their effect upon capillary flow processes. Studies of the dynamic contact angle during solder and suspension flows are in progress.