More than 400 students received their bachelor's degree early in the morning Saturday, May 19. 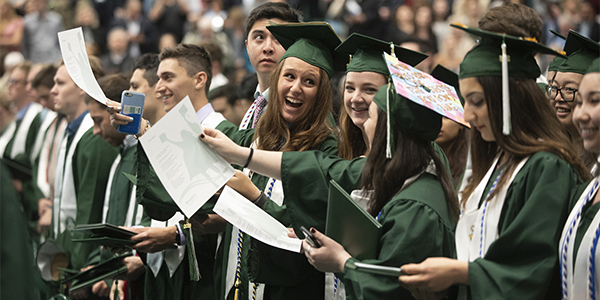 The undergraduates assembled bright and early on a rainy Saturday morning. As student speaker Atdhetare Ame said, “We can always count on the Watson School of Engineering for one last 8 a.m., right?”

Following an address by Binghamton University President Harvey Stenger and a welcome from Provost and Executive Vice President for Academic Affairs Donald Nieman, Dean Krishnaswami Srihari welcomed the graduates with his congratulations and advice.

Srihari encouraged students to, “Listen, be brave, be inquisitive but also be respectful. Seek a mentor, be a mentor.”

After an introduction by Chair and Professor of the Computer Science Department Weiyi Meng, guest speaker Sema Fatma Oktuğ, a professor of computer and informatics engineering from Istanbul Technical University took to the stage.

Oktuğ began her talk by pointing out the appropriateness of the ceremony being celebrated during the Commemoration of Atatürk, Youth and Sports Day, a national holiday in her home country of Turkey.

She told graduates that, “Every night when you put your head on the pillow, you should have a clear conscience. Always consider ethics.” Oktuğ also addressed the importance of domestic life, “If you are happy at home, you can concentrate on your work better.”

The first student speaker, Jung Park, received a bachelor’s degree in both computer engineering and business administration. Despite this double workload, Park still managed to make the dean’s list every semester.

“We did it!” he said. “Who can attain an engineering or computer science degree alone? STEM is hard. Our classes are hard…What made us great engineers is how we learned to solve problems and work together as teams.”

This emphasis on the importance of outside support is something instilled in Park from his mother, who, after being widowed, moved to the U.S with her two children and a first-grade level understanding of English. With support from her children, she now works at a Fortune 500 company.

“She achieved her version of the American Dream, an example for all of us,” said Park, whose grandparents traveled over 20 hours from South Korea for the ceremony.

The second student speaker, Atdhetare Ame, known by her friends as Addy, received a bachelor’s degree in mechanical engineering.

Ame also remarked on the incredible community of the Watson School’s graduating class.

“I don’t think anyone will forget the chemistry that this class has together,” she said.

Ame gave thanks to all those who supported her, including her own family, which could be seen waving the Albanian flag as she spoke.

Ame also noted the losses that Binghamton University faced this year and included a moment of silence for the students who lost their lives, including engineering freshman Jaoa Souza.

The community of the Watson School and Binghamton University was evident in every speaker’s remarks and will follow the graduates as they take this next step in their lives.