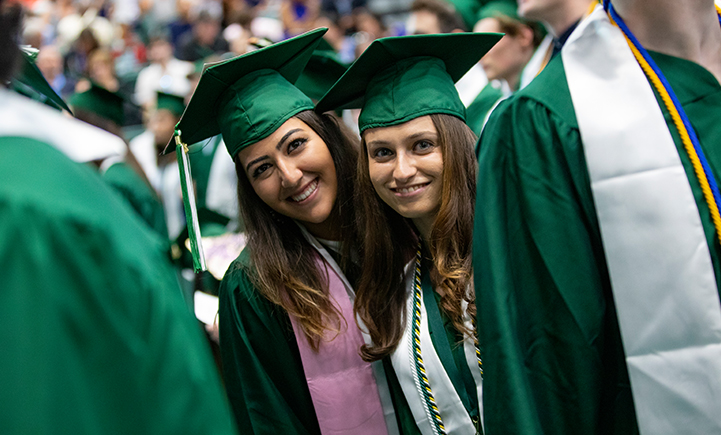 Graduating into a business climate defined by rapid change and disruption, hundreds of Binghamton University School of Management graduates were offered advice on how to weather what’s next with confidence and optimism.

“Commencement is a time for celebration. Today we celebrate your success and your contributions to the School of Management,” said Dean Upinder Dhillon.

Over 450 students were awarded their bachelor’s degrees at the School of Management (SOM) Commencement ceremony on Sunday, May 19. About 190 master’s and PhD students received their degrees at the doctoral hooding and Graduate School ceremonies earlier in the week. 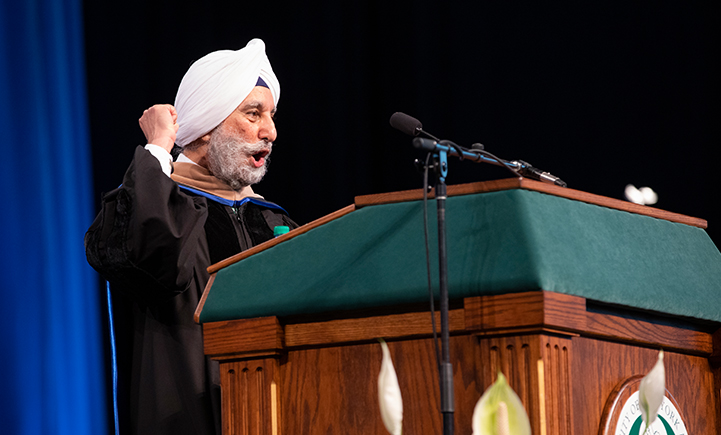 Upinder Dhillon, dean of the Binghamton University School of Management Image Credit: Jonathan Cohen.
Dean Dhillon spoke about the role students and alumni play in bolstering the school’s reputation and urged students to never stop learning. He also asked students not to forget the role their families played in their achievement.

“Your families have invested time, tolerance and love for your education. In many cases, their hard work and sacrifice have made it possible for you to complete your degree,” he said. “It is now time for you to give back to your family, community, profession and alma mater.”

Howard Unger ’82, an innovative leader in capital investment dedicated to advancing human understanding and world peace, was awarded the Doctor of Humane Letters at the ceremony.

Unger, an SOM alumnus himself, joked that he would be using his remarks as an opportunity to give the graduates one final lecture before they left Binghamton. Titled “The top three things they never taught me in the School of Management,” Unger gave his bits of advice in the form of a countdown.

“There’s a fine line between stupid and scrappy — and recklessness defines it,” said Unger. “I’m talking about the courage and confidence to take controlled, responsible, thoughtful risks when everything is on the line.” 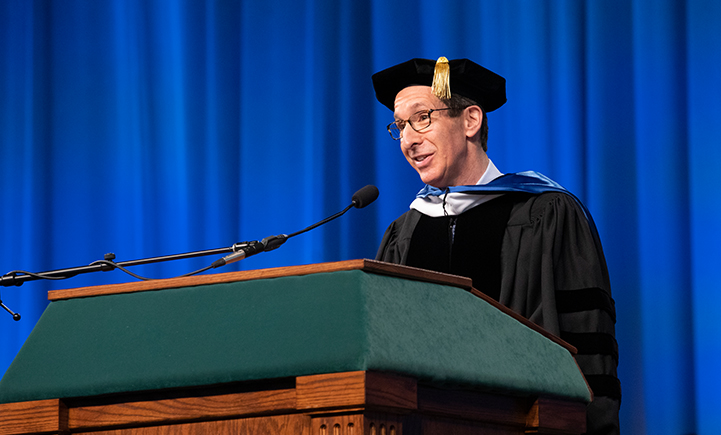 Howard Unger ’82 Image Credit: Jonathan Cohen.
Unger said his confidence in being scrappy came from both his upbringing and his Binghamton experience.

“Like many of you, I’m a first-generation college student. My father was a Holocaust survivor and my mother was a Bronx girl who taught herself to be a bookkeeper,” he said.

Unger said he came to Binghamton because it was affordable, and he has no regrets about it. Taking pride in his background, he encouraged students to do the same.

“Don’t forget that. You know things your competitors never will,” he said. “Your instincts are shaped by circumstance and sharpened by schooling.”

2. You’re entitled to the value you create — no less and no more.

“There’s an iron law in business The bust always comes. And during the boom, people always say it never will,” said Unger.

While it’s OK to enjoy the benefits of hard work, Unger warned against confusing those benefits with lifelong entitlement.

“It’s a reputation for the simple values you learn at a place like Binghamton, values like loyalty and integrity and generosity, that will get you through the tougher days,” he said.

Learn more about the School of Management Class of 2019!

While making a profit isn’t a bad thing, Unger encouraged students to pursue purposeful ventures and give back when and wherever possible.

“I’m not suggesting you give it all away. I’m suggesting you acquire and invest with purpose. Know who you are and what you believe,” he said. “That’s what you carry in your hearts from this place.”

Like all effective lectures, Unger wrapped his up with a brief recap, reiterating the main takeaways.

“Be authentic. Be decent. And be purposeful. That’s it. Three lessons, no exam, and now the two words you’re most eager to hear: Class dismissed!”

Student speaker Sofia Haikin expressed gratitude for making the most of her time at Binghamton. Originally from Israel, Haikin majored in business administration with concentrations in marketing and management information systems. 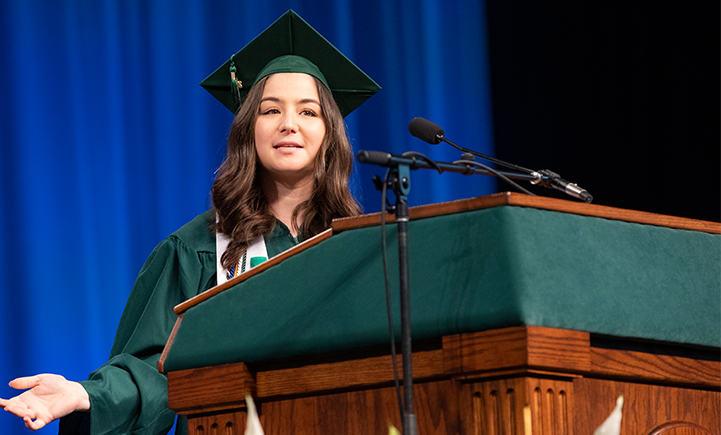 Sofia Haikin Image Credit: Jonathan Cohen.
“Growing up, my mom would constantly say to me, ‘It is always better to do something rather than living with the regret of potentially missing out on a great opportunity.’ I grew up with the idea that as long as you try something, you can decide whether or not it’s worth it,” she said.

Haikin recalled some of her “What if?” moments that led her to Binghamton, including an admitted-students event at Ernst & Young (EY) that she attended in Manhattan.

“Before the presentation began, I was talking to someone who I assumed was currently working at EY,” she said. “It came as a shock to me when I later realized that I had been talking to Dean Dhillon!”

After the event, she recalled telling her mother she’d be playing the “What if?” game forever if she didn’t go to Binghamton. And when she arrived on campus, she instantly got involved with a number of activities and organizations. 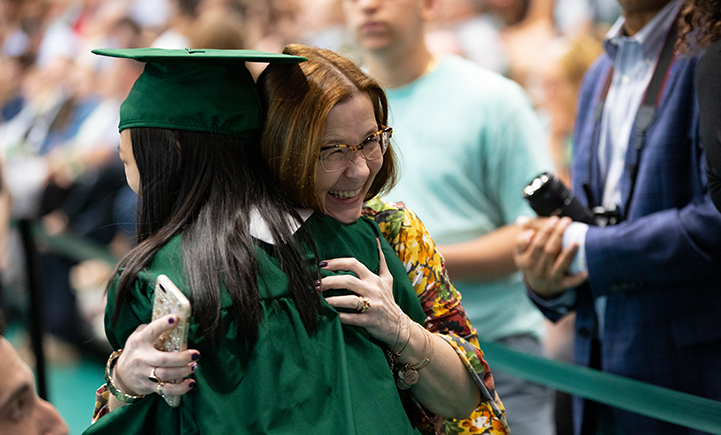 Image Credit: Jonathan Cohen.
“Every time I considered picking up a new activity, I asked myself the ‘What if?’ question. I would never know if I didn’t try. And once I tried, I worked persistently to make sure that I would put my best foot forward and give it my all,” she said.

Haikin said that what binds SOM students together is their willingness to not only take on new opportunities, but to then ask, “What’s next?”

“As you start on your journey, never let your ambitions and goals fade. Never fall complacent, never stop believing in yourself, and trust your gut feeling when you think of that ‘What if?’ question. Your future awaits and it is your choice to make it memorable,” she said.