SOM looks ahead to what's next as it celebrates golden anniversary 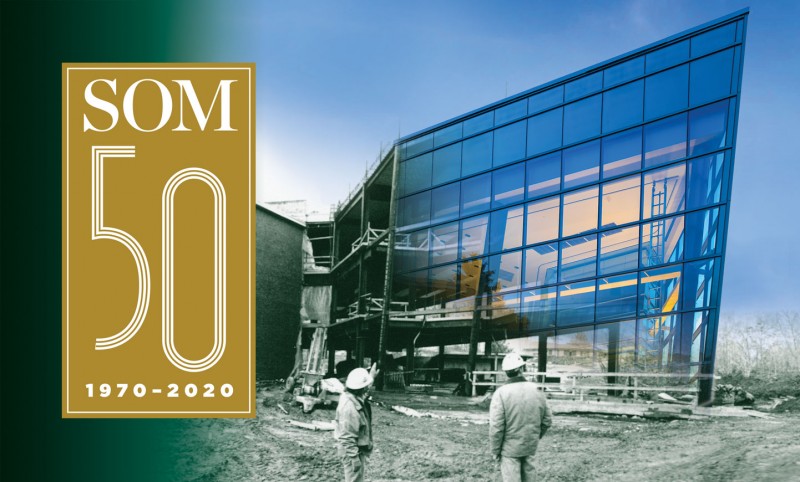 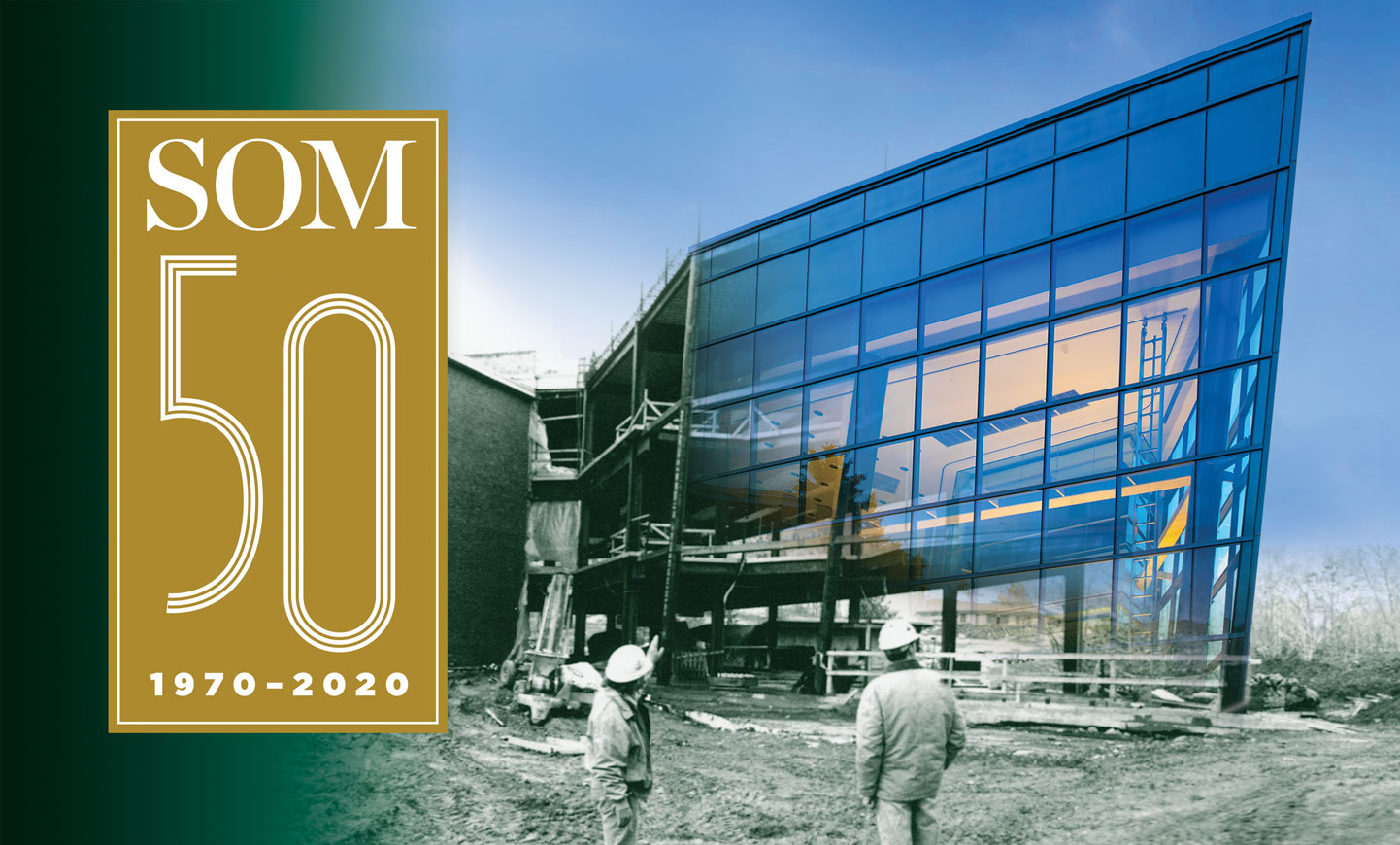 It wasn’t always known as the Binghamton University School of Management.

It was once the Harpur College Department of Business Enterprise and Accounting, until a handful of faculty saw an opportunity to strengthen business education at Binghamton by spinning the department into a separate school.

In 1970, they accomplished just that with the establishment of the School of Business. And while it took only a year to change the name of the new school to the School of Management, much more has changed in the five decades since.

Yet, the foundation remains strong, supporting everything that has been built upon it since.

As the Binghamton University School of Management celebrates its golden anniversary, it is not only commemorating its previous successes but looking to the years ahead with excitement and a sense of optimism.

There is no singular way to measure success, but for an institution of higher education, an obvious place to start is its rankings.

This pride is the result of years of strategic hard work to build the foundation for today’s School of Management.

And it all started on the 10th floor of the library tower, the school’s original home.

“We didn’t have much as far as rules and regulations go — no grading system, no admissions committee, no catalog. But we had the keys to get going,” says Vincent Pasquale ’66, MA ’68, former assistant dean of SOM. Hired in the summer of 1970, Pasquale helped turn the department into a fully functioning school.

“We got to work doing everything that needed to be done. And all of a sudden, we had ourselves a school,” he says.

As the student body grew, so did the faculty and staff. With the growth came an increased ambition to further validate the school’s mission.

“The faculty wanted to have a school that was bigger, stronger and more well-known,” says Bartle Professor Thomas Kelly, who served as associate dean in 1984 and dean from 1986 to 1991.

“There is nothing more powerful than having a group of faculty coalesce around certain goals. There was an atmosphere in the school: You could walk down the hallway and ask any secretary or any junior or senior faculty member what the school’s goals were, and they would all have told you the same thing,” he says.

One of those goals was to move the school to a permanent home. The SOM had already moved from library north to the Fine Arts Building to the basement of library south.

But when ground broke on Binghamton University’s new Academic Complex in 1994, faculty and staff saw their dreams starting to become a reality. The SOM began moving into Academic A just a few years later and has remained there since.

“Moving into Academic A was transformational for this school,” says Dhillon. “As our reputation continued to grow, I think it was significantly enhanced by being in a tremendous facility. The school’s home impacts the culture in which we operate, and it really had a positive impact.”

Two other important goals came to fruition around the same time the school celebrated its 20th anniversary. In 1991, the SOM obtained accreditation by the Association to Advance Collegiate Schools of Business (AACSB) and also received approval to begin a doctoral program.

While the school had already dedicated itself to research through various avenues, such as the development of the Bernard M. and Ruth M. Bass Center for Leadership Studies, the establishment of the PhD program was a game changer. Faculty would not only teach and mentor the next generation of business leaders, they would contribute to the body of knowledge being taught to students around the world.

“Research gives you the ability to transform your classroom,” says Dhillon. “If you’re working on issues you’re passionate about, you bring those same issues into the classroom and you’re able to convey that passion for your subject to your students. Teaching is not just conveying knowledge, but conveying that passion.”

Shelley Dionne, MBA ’94, PhD ’98, associate dean of SOM, was part of the first cohort of students in the then-new doctoral program.

“Knowing it was a brand-new program, I saw it as a chance to be one of the first students to work with super-engaged faculty. Where are you going to get better help and mentoring than from faculty who are just starting out and want to do a good job fostering a program they’d always wanted?” she says.

Research has remained a pillar of the school, making an impact on both students and the business world.

“We love to help people, whether it’s students or organizations that need some assistance. That’s what we love to do. We’re working on real-world problems and finding solutions that can really help people,” says Dionne.

Dionne now coordinates the PhD program, a “full-circle” opportunity she does not take lightly. “I couldn’t be prouder, and I feel so strongly about making sure it’s the best school it can be,” she says. “I hope I can build on what was started by the faculty and program directors before me and continue this upward trajectory.”

To understand how the school is accommodating a rapidly evolving business climate, it’s important to understand what has remained constant. It’s these constants that the school has relied upon and continues to rely upon to spur innovation in times of change.

“Whenever we have established key, strategic objectives and plans for the future, our alumni have always stepped up and delivered,” says Dhillon, adding that alumni have been highly influential in shaping the experience of the modern-day SOM student.

“Alumni support has helped us recruit and retain top faculty, provide assistantships and scholarships to our outstanding students, and provide funding for hardware such as our Bloomberg terminals or programs that teach students important skills such as spreadsheet modeling,” he says. “Alumni support has been the cornerstone of many of our initiatives.”

As alumni move up and become business leaders, their support goes beyond just financial — there is an intangible aspect that is both immeasurable and invaluable.

“We are constantly interacting with leaders in different fields. Many were once SOM students themselves. They tell us what transformations are happening in industry and provide us with feedback on what skill sets they are looking for as far as future business leaders are concerned,” says Dhillon.

This insight is especially important as the school looks to shift its curriculum to accommodate the “fourth industrial revolution” (see sidebar), which is being driven by machine learning and artificial intelligence.

“The fourth industrial revolution has already begun having an impact on society and the school. There’s a lot of transformation and change that is going on around us, and how we handle that particular change is going to define our success in the future,” says Dhillon.

With the recent establishment of a West Coast Advisory Council, made up of alumni leaders in Silicon Valley, Dhillon hopes SOM can build upon its already strong reputation in New York City by expanding to other locations.

“Silicon Valley is driving much of the disruption we see in industry today, and there is a need for strong business talent there, which our school can provide,” says Dhillon. “It gives our students creative opportunities in a sector that is transforming the global economy.”

First introduced by Klaus Schwab, the executive chairman of the World Economic Forum, the “fourth industrial revolution” is driven by breakthroughs in fields such as artificial intelligence, the internet of things, robotics and quantum computing.

Schwab believes it will completely change how we work, live and interact with one another, with technology blurring the lines between the physical, digital and biological worlds. He also believes it will impact all disciplines, economies and industries.

Schwab calls on leaders in business, government and civil society to work together to ensure the rapid development of new technologies that put people and society first.

More opportunity in tech-related fields means embracing more business-tech learning opportunities. These skills, in combination with the business and management fundamentals that have always been the bedrock of SOM’s curriculum, will define School of Management students of the future.

“Business problems do not come as a finance problem or an accounting problem or an HR problem. They come in complex forms, and those forms require individuals to be able to think across fields functionally,” he says. “The right combination of technical and soft skills will lead to our students’ success in handling these complexities.”

The confidence to work across fields is ultimately what drove the school’s name change from the School of Business to the School of Management one year after its creation.

“We didn’t want to convey this notion that students would only be working in business,” says Pasquale. “It doesn’t matter if you end up working in healthcare, education or nonprofits. There are certain management consistencies across all avenues of work. We wanted our students to have the abilities to be successful in any industry.”

The success of SOM over half a century is testament that constancy and change can go hand in hand.

But Kelly says one constant that will never change is the important role the School of Management plays in society.

While a topic like this can easily drift off into philosophical waters, Kelly, who calls business a “noble profession,” doesn’t hesitate to give a definitive and succinct explanation of the school’s purpose.

“Humankind depends upon organizations to deliver all that it needs. Whether it’s automobiles or medical services or higher education or any product or service that humans buy — they are all delivered by business,” he says.