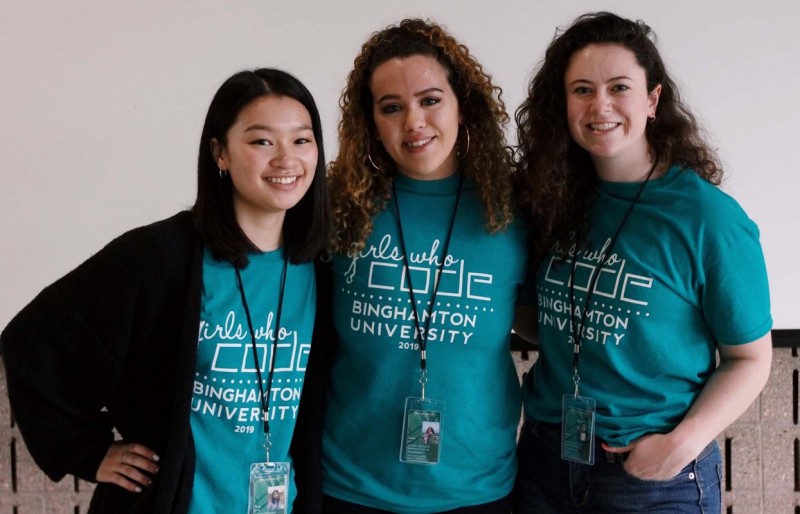 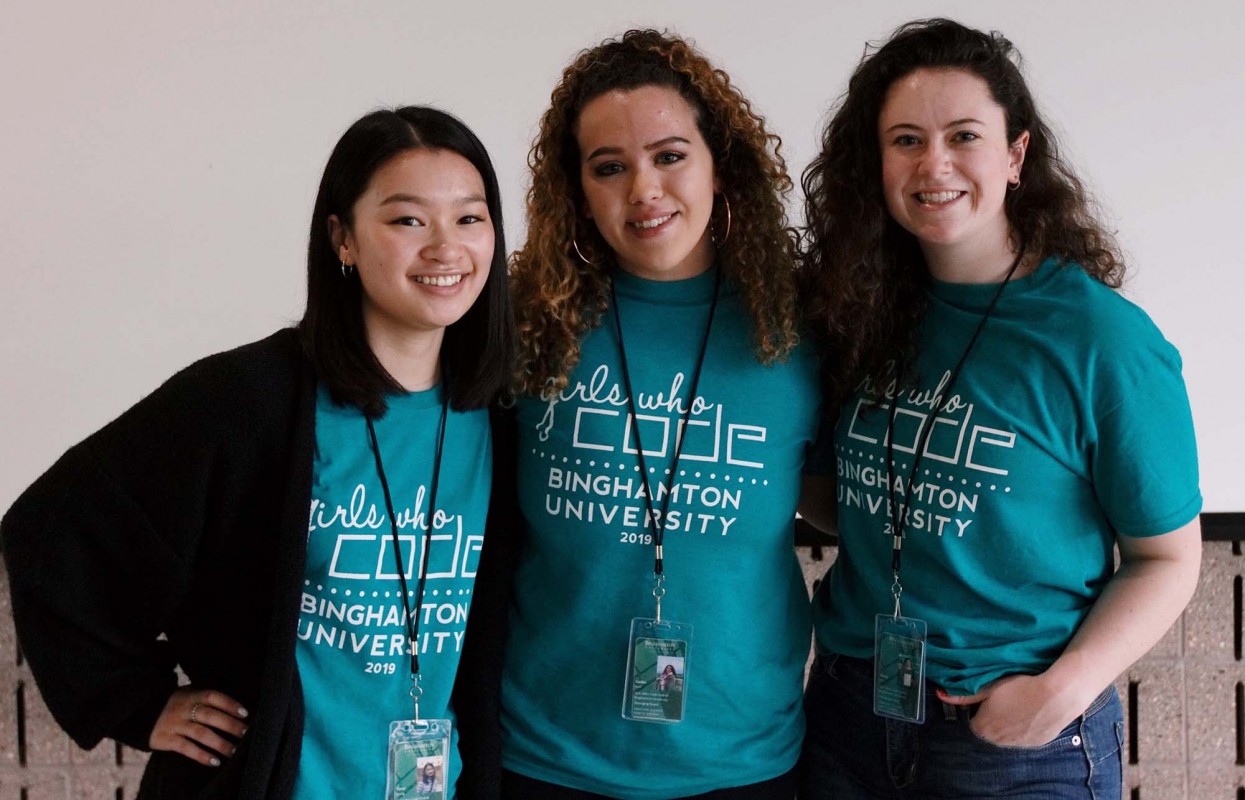 Despite some impressive strides over the past few decades, young women entering engineering and technical fields continue to face a sizable gender gap.

The Watson School has a variety of groups that students can join. Learn more about them at binghamton.edu/watson/about/student-groups.html and donate at binghamton edu/watson/giving.

In 2017, the Watson School created a program called Watson Competes! that combines practical skills with fun competitions, friendships and even a few awards. Learn more about the teams and how you can donate at binghamton.edu/watson/competes.

One organization trying to inspire and educate girls who have an interest in computer programming is the national nonprofit Girls Who Code, founded in 2012 by Reshma Saujani. More than 50,000 elementary, middle school and high school students nationwide have taken part in its programs since then.

In early 2019, three Watson School engineering majors felt inspired to start a Girls Who Code chapter at Binghamton University that would be open to female students at six Broome County high schools. The idea is to teach them how to write computer programs as well as to mentor them and offer role models for future tech careers. Advising the group is Professor Hiroki Sayama from the Department of Systems Science and Industrial Engineering.

An average Girls Who Code chapter starts with five younger students. At Binghamton, the first class had 16. Credit the passion of founders Fiona Liang ’19, Caitlin Hall ’19 and Kasey Hill ’18, MBA ’19, for going big right from the beginning.

Liang first encountered Girls Who Code during a summer immersion program just before her senior year in high school. Before that, she had considered becoming a lawyer.

“I never thought I’d go into engineering,” she says. “I thought it was something where someone always sat behind a computer behind a wall and never talked to anybody. Joining the Girls Who Code high school program gave me the encouragement and the confidence to pursue it.”

Hall adds: “I wish I had had something like this in my high school when I was there. We had a one-day coding event, but we had nothing that showed real programming. It’s something these kids really love and take advantage of.”

Connecting to a national organization gave the Girls Who Code chapter a solid foundation on which to build their group, including suggested lesson plans and a “club specialist” assigned to aid with questions. The three founders at Binghamton, however, still had to find interested high school students, get them onto the University campus and recruit trainers from among their Watson School classmates so that the ratio is two to three students per instructor.

The spring Girls Who Code classes focused on the Python programming language, while future plans will see JavaScript added to the teaching roster. At the end of each semester, students give presentations about projects they’ve worked on, and each receives a certificate and praise at a graduation ceremony.

After scoring prestigious summer internships — Liang with Goldman Sachs and Hall with Lockheed Martin — they both entered their fifth year of the 4+1 BS/MS SSIE program at the Watson School this fall. Hill graduated in May from the accelerated BS/MBA SSIE program, and other instructors hail from different Watson departments.

“We really want an all-encompassing group that comes from different places as well as different majors,” Liang says. “We want to show that with coding you don’t need to be a computer scientist. You can be a biomedical engineer or an industrial engineer, you can go into finance, you can go into the sciences or the humanities, but coding is an essential skill to have and is applicable anywhere.”

Girls Who Code is one of 26 Watson student groups currently on campus, along with eight Watson Competes! teams. Each of them would benefit from donor support. Girls Who Code, for instance, could expand its number of students or the programs offered.

“Companies like to support the cause of the group, encouraging girls to pursue a STEM career and teaching problem-solving skills,” Hall says. “It’s a great initiative.”

Liang and Hall are hoping that Girls Who Code lasts long beyond their time at Binghamton because, as Liang says, “If you have programming skills, you really can do anything.”